The State of the Wyoming Economy

On April 27, the Consensus Revenue Estimating Group released its revenue update for the first quarter of 2018. The report was a source of joy to some, and will most likely embolden the tax-and-spenders in the legislature. That would be bad, of course. The state budget is still in the red, and the trend is still one of growing deficits, not shrinking ones. Furthermore, for three reasons the bump in revenue is of such a weak quality that the most prudent approach for our legislators would be to ignore it and continue as if the deficit is still growing (which, again, it is).


One of the three reasons was the growth trend in the Wyoming economy. After the almost two year long downturn, the economy has stabilized and shown some modest rebound.

The importance in this new macroeconomic trend cannot be under-estimated. Our state and local governments have calibrated their spending for tax revenue levels that, to avoid deficits, require a level of economic activity we have not seen in almost ten years. Back then, our state GDP topped out at almost $45 billion; since then, we have lost eight percent of our state's economy. In actual money, that means $3.6 billion worth of economic activity that is no longer taking place.

Right here, in these numbers, we have the reason why our state and local governments cannot pay for all their spending. This point becomes even clearer when we isolate the minerals industry:

We have now seen a rise again, at about the same growth rate as we saw leading up to the boom ten years ago. By the end of 2017, annual minerals production amounted to $10.24 billion, up 53 percent from Q1 in 2016.

Here the full picture since 2005 (again, please note that these are current-price numbers): 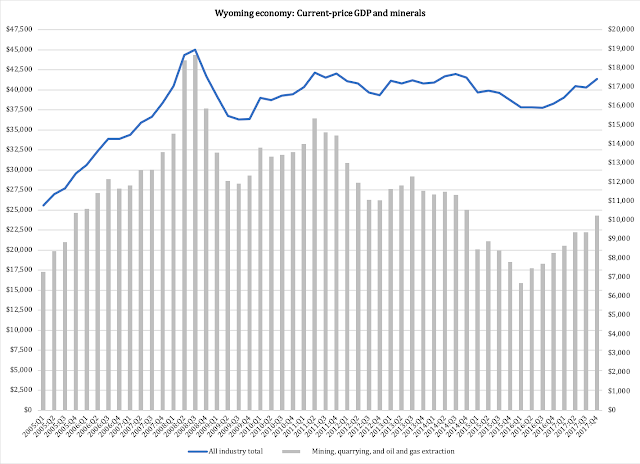 Gross Domestic Product is the broadest possible tax base for an economy; in Wyoming, the minerals industry is an even stronger indicator of where tax revenue is going. With this in mind, it is hardly surprising that our state government is running a deficit, especially when - according to a quick review of numbers from the National Association of State Budget Officers - total state spending increased from $5 billion in 2008 to $8.84 billion in 2015. Granted, this included capital spending, but since we do not have a bonds-based funding system for capital spending, we have to count it toward the total burden that government imposes on taxpayers.

To be abundantly clear: when the tax base stagnates or shrinks, government cannot expect to continue to spend as usual.

But what about that rebound that has given us some more tax revenue? Is that not going to replenish the state coffers?

Partly and temporarily, yes. However, as I pointed out yesterday, the growth in economic activity that is behind this increase is not of a quality that will last. Figure 2 reports the rates of growth in the minerals industry and the non-minerals private sector (adjusted for inflation): 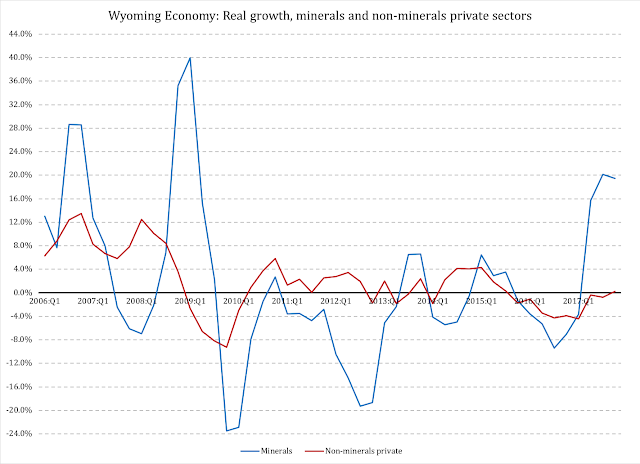 The blue function shows growth in minerals activity in Wyoming. Its volatility, while well known, is worth keeping in mind when we look at the spike that took place in 2017. As a tax base, meaning in current prices, minerals activity is still only back to 55 percent of its peak level ten years ago.

What is more important, even, is that the rest of the private sector - the non-minerals industries represented by the red function - are essentially in a standstill. After eight straight quarters of decline, the non-minerals private industries in Wyoming expanded by 0.3 percent in Q4 of 2017.

My conclusion from last year and this past winter still stands: after the 2015-2016 downturn we are in a state of stability - but not recovery - and we will remain here until either of two things happen:

1. Taxmageddon sends us plunging into macroeconomic Gehenna; or
2. Our next governor and our legislature work together on a sound plan for structural spending reform and statewide, systematic deregulation.

What future do you want for our state? The choice is yours, in August and in November.
Posted by Sven R Larson, Ph.D., Political Economist at 10:20:00 AM