Yesterday we saw how the middle class is moving away from many parts of Wyoming. Today we are going to take a look at the flip side of that trend, namely the dependency rate on public assistance. I introduced that rate on Monday, calculating it based on the reported number of households who get Supplemental Security Income, public cash assistance and food stamps. This is a limited set of welfare, but it provides a good picture of how dependent households are on these programs.

Before we get to the numbers, let us make note of one little methodological issue. The Census Bureau reports households receiving assistance individually per program, not as a whole. The numbers used here are added by program, then compared to the total number of households. This is normally not advisable due to overlap - some households receiving cash assistance also receive food stamps - but in this case it is the only way to get a reasonably good picture of welfare dependency.

In other words, the best way to interpret the following numbers is as "recipient points" for welfare among all households in a county.

With that caveat in mind, here is how the dependency rate has evolved over the past few years. by county: 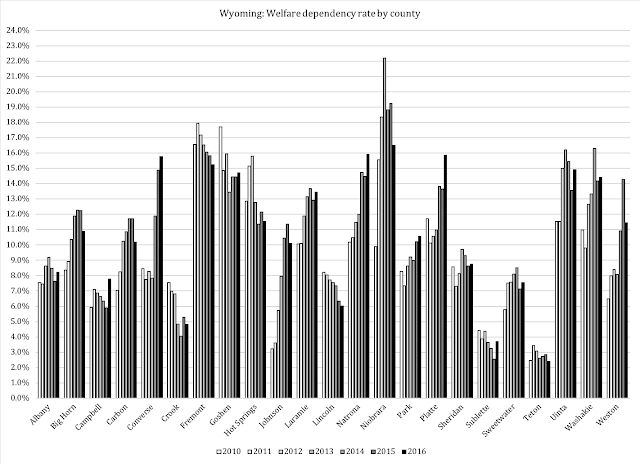 As for the long-term trend in welfare dependency, the picture is mixed across the state. Some counties have seen a substantial rise, such as Big Horn, where the ratio is up from 8.4 percent in 2010 to 10.9 percent in 2016 (though it peaked at 12.3 percent in 2014). Carbon and Converse have also seen sharp increases, with Converse almost doubling from 8.5 percent in 2010 to 15.8 percent in 2016. Johnson and Laramie follow the same trend, as do Natrona, Park, Platte, Washakie and Weston.

Other counties have the opposite experience, among them Crook, Fremont, Hot Springs and Lincoln. It is not apparent what drives the trend at the county level, though a comparison between employment, middle-class income and welfare dependency is on the to-do list.

What we can say at this point, though, is that Wyomingites generally do depend more on welfare today than they did at the bottom of the Great Recession. Statewide, the welfare dependency rate has gone up from 9.1 percent in 2010 to 11.3 percent in 2016.

Table 1 breaks down this number by county. The number represents the increase in the dependency rate from 2010 to 2016. For example, in Johnson County the number of household recipients of welfare were 3.2 percent of all households in the state; in 2016 it was 10.1 percent, more than tripling the dependency rate:

It will be interesting to see whether or not the seven counties with a lower welfare dependency rate are also counties where employment and household income have picked up, or if outbound migration has accounted for the decline. More numbers to come, in other words.

In terms of policy, we can glean one big piece of information from this: a higher dependency rate indicates that Wyomingites in general are not making forward progress in terms of work-based income and self determination.