A European Lesson for Wyoming

Back in the States again from a ten-day trip to Europe. After some family-related matters in Sweden and a quick stop at my alma mater in Denmark, I enjoyed many free-speed miles on the Autobahn before I attended an economics conference in Amsterdam.

The conference was actually better than I expected, especially because I learned things that we can apply here in Wyoming. One of the papers discussed was on private infrastructure funding, something we could definitely benefit from here. Hope to have more on that soon.

I also got a very informative ground-level perspective on Europe today. After decades in the choke hold of a welfare state, and under the boot of a government-first politocracy, Europe is basically done for. There is no real way for that continent to come back again.

Right here, we have a lesson to learn from them, both in Washington and in Wyoming. Europe's political elite is totally incapable of understanding, let alone solving, Europe's systemic economic problems. They keep trying the same old solutions over and over again, wearily expecting a different outcome.

The depth of their problems goes beyond ours, but we are on the same course as they are. Superficially, it does not look that way, especially if you read articles like the Politico's recent summary of Europe's current state of affairs. Though a decent overview, the article symptomatically fails to grasp the underlying trends that define Europe's future.

And Wyoming's, if we don't learn from their experience. Like them, we are governed by a hapless political elite that is impenetrable to common sense and sound analysis. Therefore, we are doomed to the same future: perennial economic stagnation and industrial poverty.

As much as many analysts fail to recognize it, the economic mechanics that are at work in an economy with 500 million people are also at work in an economy with 500 thousand people. When government expansion reaches a certain point, clearly identifiable in economic statistics, the private sector is demoted to residual status. The result is also clearly identifiable, in Europe's case - as in ours, actually - in the form of a cyclically and structurally stagnant economy.

The Europeans themselves have actually realized that they have a problem, and there is a growing debate over why this is so. The catalyst was a conversation about why Europe is not home to any "Silicon Valley" style mega-tech region. They have old-school manufacturing and they have a couple of strong financial centers. What they do not have is a vibrant, innovative economy and new industries competing for venture capital and the workforce.

The Europeans acknowledge that America, China, India and to some degree Japan are leading the way here. You can even hear Europeans recognize that parts of Africa seem to grow more confidently than Europe. They are especially aware of how structurally dynamic the American and Chinese economies are.

China's economic wonder, which is to some degree exaggerated, will only last for as long as their government is actively involved; we, on the other hand, will thrive more the less government is involved. That said, the Europeans have not yet begun to understand that government actually needs to structurally reduce its footprint in the economy. That is the extra-credit curriculum that they probably won't get to in a long time. They have just begun to grasp the most basic learning point in free-market economics, namely that you need to allow people to start, run and terminate businesses as they please.

It is not that Europe lacks businesses. Of course they have many large ones, but they tend to be concentrated to old-style sectors of the economy, and they often consist of corporations that have been big and dominant since the early decades of the last century. If you are in manufacturing, especially in Germany, you are supported in every way possible by government and by workforce skills programs (they have a great industry-based apprenticeship system), but the general experience is that anything else, anywhere else, runs into almost insurmountable problems:

-Environmental regulations get in the way of site development and operations;
-Rigid labor laws, regulating everything from the work week to compensation to leave policies and - of course - layoffs, make hiring people a high fixed cost, an area where some Europeans refer to the United States as a good example of what works;
-Starting a business is a nightmare in some countries, with red tape so thick it alone can stop the best business initiatives;
-Taxes add a huge markup to every step of the start-and-run process.

The European value-added tax system (VAT) alone is a big headache for small businesses. Because of its design, the VAT invites tax cheating and corrupts businesses just by making it profitable to evade the tax or manipulate the tax base. My favorite example of what the VAT does is the Swedish version, where the tax code regulating the value added tax is 1,000 pages long.

Just for one tax.

Because of its overall hostility to businesses, Europe has gotten stuck in yesterday's statist-capitalist hybrid that tries to maintain a functioning private sector for no other reason than to milk it for taxes. Big corporations like the giants of the German auto industry can survive because they are big enough to afford the costs of an encroaching government. They can lobby (and lobby they do - never think this sport is just played in America...) and they can have entire departments devoted to government relations.

Small businesses, on the other hand, succumb to the pressure of legal, regulatory and tax compliance - if they even manage to get past the point of opening the doors.

In a nutshell, as I explained in my book Industrial Poverty, Europe has slowly gotten itself stuck in a second-tier status among the world's major economies, and the reason is their egalitarian ideology. All their major policy decisions, from labor and other business regulations to entitlements and taxes, are driven by a government-first premise. The private sector is squeezed until the choking point, then some easing takes place until taxpayers can breathe again, then the grip slowly tightens again.

Over time, this leads to economic stagnation, fiscal crises and the death of optimism, entrepreneurship - and hope.

Here in Wyoming, the politocracy is marinated in the same mindset. We can see it in everything from the governor's ENDOW project down to the ignorant arrogance of people like Cheyenne mayor Marian Orr. (She needs a challenger in 2020...) Everything from the discussion about raising taxes to the push for major, new economic-development initiatives, are practical expressions of a government-first attitude. What we need is a state government, both in the legislative and the executive branches, that follows the exact opposite philosophy: first people and their businesses, then a government limited to a small number of clearly defined, enumerated functions.

Today, we have a government that is sprawling in all directions. It is a government we cannot afford. We need to change this today, or else we will wake up at some point in the future like drowsy Europeans and start asking what happened while we were asleep.

There is one more reason why we need to do this. Recently, under the Trump administration, the federal government has shown some promising ambition to change course, away from its own government-first philosophy. The significant reform to the corporate tax structure is one example, his deregulation ambitions another. The problem is that while this is happening, Congress has


In other words, we have a situation in Washington that is teetering on the brink of perennial welfare statism. If the Republican party - the only political force that can restore free-market capitalism if they want to - does not take the lead, our policies at the national level will eventually lead us into the second-tier economic wasteland currently populated by half-a-billion Europeans.

For precisely this reason, we here in Wyoming need to do absolutely everything we can to preserve and further strengthen a free-market economy with a limited - and I mean limited - government. In every federation there is wiggle room for the sub-federal jurisdictions to place themselves somewhere along the spectrum from relative liberty to unmitigated statism; we need to make sure that whatever happens in the future, we will always be the most free, most business friendly - and most prosperous - state in the country.

This is a tall order to deliver on. But if we are scared of tall orders, we should just do what the Europeans have done: hand over our lives to government, light up and drop out: 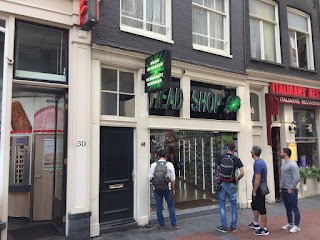