Yesterday, in his last State of the State address as governor, Matt Mead choked up when he wanted to thank his wife for standing by him during his gubernatorial tenure. He showed a great deal of love for both her and their children.

I want to recognize this, and express my respect for the governor for being a genuine family guy. In politics and public policy, the tone is often hard, almost unforgiving, to a point where we forget the person behind the politician.

Sometimes, the person also comes across as a bright contrast to the politician. That is more often the fault of our political culture than the individual, but it is nevertheless a feature of political life that discourages many from running for office. Personally, I left that side of politics almost a quarter century ago, for precisely this reason.

One of the problems we then run into is that the crop of candidates is sometimes adversely selected. People get into politics because they have a background that makes them more suited for the political culture than the political content. When this happens, we end up with elected officials whose forte is not in pushing controversial issues, but in perpetuating the political culture. People who get elected end up gaining from doing little and losing from doing a lot. Political agendas become more self-serving than self-less.

Sadly, Matt Mead falls into this category. He is the nice guy who shuns bold leadership and tries instead to not rock the boat.

This, of course, is not how the good governor sees himself. He portrays himself as a genuine fiscal conservative and a bold leader whose vision for a better Wyoming stretches 20 years into the future. Sad to say, I believe that this his political selfie is actually genuine: he really believes that you can be a fiscal conservative and support the ENDOW project at the same time.

I have written plenty on ENDOW already, and I will return to that project in an analysis of, among other things, Senator von Flatern's WyoFlot bill (SF0040). For now, let us examine Governor Mead's claim to fiscally conservative fame.

From one viewpoint, he could be said to be correct. On his watch, or as much of it as we can document right now, he looks fairly good. Table 1 shows the total, current-price increase in state and local government spending - plus the two added under "total" - in the last four complete gubernatorial terms. Current-price GDP growth is added for reference:

Table 1*
Sources: Census Bureau and the Bureau of Economic Analysis

Local government spending is, of course, in many ways beyond the governor's influence. However, local governments in Wyoming receive well over a third of their total revenue from the state government, and Governor Mead has made himself a champion for increasing that dependency. Therefore, it is important to include local governments for reference.

As Table 1 reports, in his first term, Governor Mead made a difference for the better. He cut the growth rate in state government spending by more than half from Freudenthal's second term. This is the kind of record that makes a guy look fiscally conservative, isn't it?

That depends on the definition of "fiscal conservative", but a common-sense use of the term would dictate that we should expect a bit more from a guy who wishes to use that term for himself. Furthermore, if we break down the total growth rate over Mead's first term to annual rates, it turns out that 76.4 percent of the spending growth took place in 2015.** A similar, if less pronounced, pattern shows up in local government spending, suggesting that the restraint that characterized the first three years of Mead 1 was as coordinated as the sharp rise in spending in the fourth year.

Still, based on these numbers we can debate whether or not Governor Mead actually deserves to call himself a fiscal conservative. Another set of numbers, however, will drive a big wedge in between him and that moniker. Figure 1 reports the GDP share of total government spending in Wyoming. The three last governors are distinguished by color:

Figure 1
Sources: Census Bureau and the Bureau of Economic Analysis 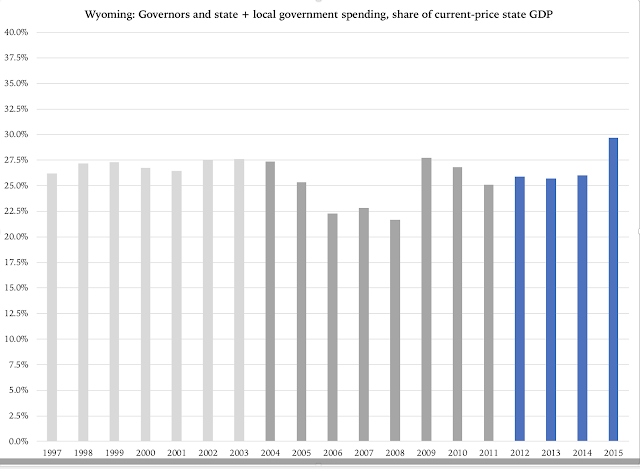 As we can see, during Geringer's tenure (for technical reasons, Figure 1 covers more of his time in office than Table 1), the share of government spending remained relatively stable. Then came Freudenthal, whose first term was one of hilarious GDP growth - as Table 1 shows, 71.1 percent in total - which probably led him and the legislature to keep spending at very high levels for a while.

In reality, it was only in the years 2004, 2005, 2007 and 2008 that state government spending exceeded nine percent annual growth. The other years were characterized by relative frugality.

The same goes, again, for Mead's first term. The problem there, though, is that unlike his predecessor, Mead governed over a state economy in decline. I am, quite frankly, not sure that Mead knows that during his first four years in office (sticking again to the one-year lagged fiscal term 2012-2015) fell by $916 million. During that same period of time, state government spending increased by almost $673 million, explaining the increase in the spending-to-GDP ratio in Figure 1.

Based on the fact that Mead allowed the state government to grow spending when GDP was shrinking, and to not oppose the fact that local governments increased their spending by $596 million, we simply cannot accept Mead's political selfie: no, he is not a fiscal conservative.

There are, of course, other reasons to reject this label, reasons related to his performance during his soon-to-be-over second term. That, however, we will have good reasons to return to later.

---
*) There is a glitch in the Census Bureau's state and local government spending. Their database over that category of government spending lacks reliable numbers for the years 2001, 2003 and 2004. In the database configured to establish Table 1, these three years are given numbers based on an assumed linear trajectory in government spending. For short-term analysis this is not recommendable; for longer comparisons like this one, it is acceptable if used with great restraint and caution.

**) The gubernatorial terms are delayed by one year to reflect the influence of their fiscal policy, as it takes a little bit for a new governor's fiscal policy to take effect. For example, the calendar years of Geringer's last term are 2000-2003, even though his term ended with the 2002 calendar year. Consequently, Mead's first term covers the years 2012-2015.
Posted by Sven R Larson, Ph.D., Political Economist at 12:52:00 PM