Yesterday, on KGAB AM650 with Glenn Woods, Taylor Haynes declared firmly that as governor he would hold the line and not raise taxes. His commitment followed Harriet Hageman's statement on the same radio show on January 2017 that this is the wrong time to be looking at tax increases. Though Hageman was not quite the bulwark that Haynes was, she did explain that Wyoming needs to compete for business with low taxes. She will get a lot of mileage out of that statement.

It is good news that two good gubernatorial candidates take such strong positions against higher taxes. Let us hope other candidates will follow their example; at the very least we can hope they will be inspired to do so if the Revenue Committee decides on Wednesday to go ahead with its Taxmageddon package. If our legislators can show some courage and keep their fingers off the tax button, they will actually give our state's economy a fighting chance to recover in 2018.

With intelligent fiscal-policy decisions in this legislative session, we can see some decent jobs growth and absorb our fair share of the growth spurt in the national economy.

Last week I reviewed the latest state GDP data, explaining that 14 industries saw expansion in production. There was a contraction in production in only five industries - and government. This was good news, of course, but I also noted that during the third quarter last year (the period that this GDP data covered) there was no growth in private-sector employment. It was not until the very last quarter last year that we saw an uptick in private employment.

And that was a small uptick, not statistically visible until December.

My conclusion at that point was that our state's economy is not yet ready for a recovery. However, a closer look at Bureau of Labor Statistics jobs data from the fourth quarter last year has made me more optimistic. We will not have GDP growth data for the fourth quarter for a couple of months yet, but the BLS numbers give us som hope. Let us start with the jobs growth in the fourth quarter, from 2016 to 2017:

Figure 1 focuses on the jobs development in the six largest industries, sorted by number of employees: Government; Trade, Transportation and Utilities; Tourism (a.k.a., Leisure and Hospitality); Retail trade; Education and Health Services; and Mining: 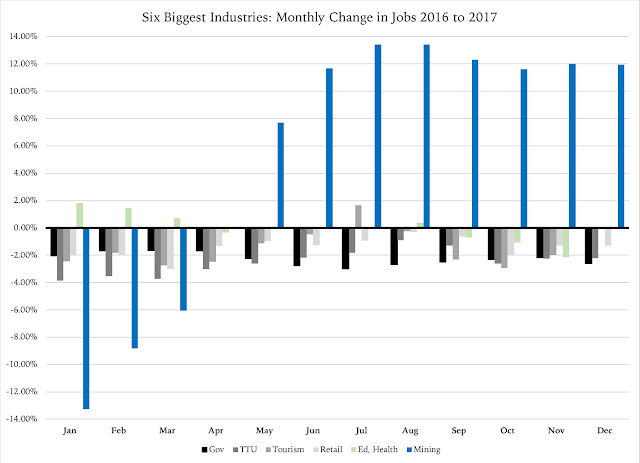 As we can see, while things no longer look as depressing across the board, only one industry has decisively turned a corner in terms of jobs. However, the numbers for the fourth quarter - and especially the month of December - look better than they have in a long time. Together with the positive GDP numbers from the third quarter, this suggests that the Wyoming economy is building some strength.

Even more inspiring are the earnings data for the fourth quarter. Earlier, I have explained that industry-level earnings have shown a mixed bag, adding to the picture of an economy in a state of fledgling stability. Figure 2 takes it up a notch, showing growth in earnings almost everywhere: 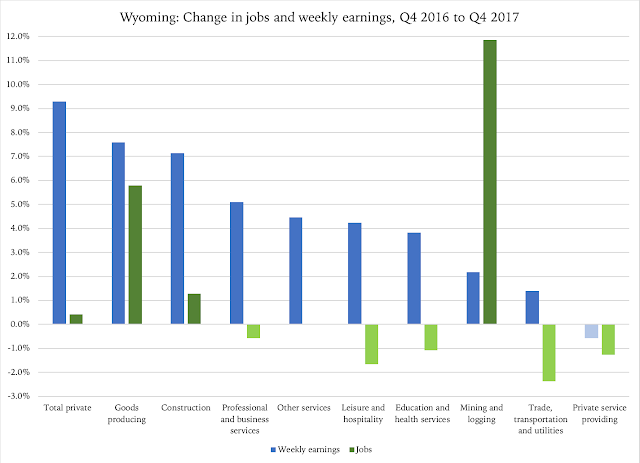 Normally I would caution that this is the fourth quarter, and suggest we wait with deriving a positive outlook from earnings numbers until the first quarter of this year. However, given the context of a strengthening GDP and the improving - though still weak - jobs numbers, I will suggest that we are looking at a relatively strong 2018.

What does that mean in more detail?

1. Jobs will grow in all industries, and it will be easier for part-time workers to go up to full time. This should spread well beyond the minerals industry.
2. Earnings will continue to rise, but modestly. Most of what people will see in growing take-home wages will be directly or indirectly from the federal tax cuts.
3. GDP growth will possibly be high - obviously depending on the minerals industry - but more likely is that it will be volatile in a bracket around three percent.

Again, all this depends on our elected representatives rejecting the Revenue Committee's Taxmageddon package.

In a coming article we will examine what this outlook means for the state budget. However, it is worth the while to wait with that article until the Revenue Committee has held its meeting on Wednesday.
Posted by Sven R Larson, Ph.D., Political Economist at 5:55:00 PM