How Big Will the Services Sales Tax Be?

One of the tax increases on the Revenue Committee agenda is a sales tax on services. Next to the Gross Receipts Tax and the proposed increase in assessment values on private and industrial properties, this tax hike has not gained much attention. Initially, it is assumed to bring in some $81 million per year, which limits this tax to a strikingly small tax base of $1.8 billion.

It is, of course, fair to take the Revenue Committee on its words when they present a limited list of services that will be taxed, de facto telling us that they will not tax other services. Perhaps the proponents of the services sales tax actually believe that their tax will be confined to the following services:

Perhaps the limited application makes the tax less unattractive, winning over fence-sitting legislators who would vote against the tax if it had a broader application.

There is just one problem with this tax: there is no logical reason why it would stay so limited. I cannot escape a nagging suspicion that the services sales tax, as presented by the Revenue Committee, is just the appetizer; it is always much more difficult to introduce a new tax than to raise an existing one. (How many of you know how high, or low, the Social Security tax was when the program was first introduced?)

My suspicion is not just based on the selection of services, but on the fact that as defined, the services sales tax is slated to bring in considerably less revenue than the sales tax on goods. The problem is, namely, that services dominate our economy. In fact, the service industries targeted by the sales tax have a combined production value that in 2015 and 2016 exceeded total output from our minerals industry. (Yes, you heard me right.) And yet, the sales tax is only supposed to bring in $81 million per year.

I have yet another reason to be suspicious. Consider Table 1, which shows consumer spending on goods and services in the Wyoming economy over the past four years (for which we have data):

While we are at it, here are the most important services industries in the Wyoming economy, viewed from the consumer's side of the transaction:

1. The first is that two thirds of all consumer spending goes toward services, making the provision of services a more important economic activity than the production and sale of goods (which - just to be clear - is not unimportant); and
2. The second is that services consumption has actually continued to grow over the past couple of years, while spending on goods has declined.

Or, as Figure 1 explains: 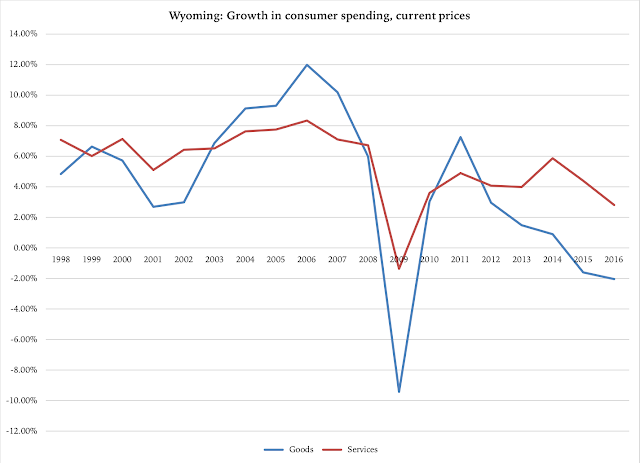 This second message is particularly important. It tells us that the Revenue Committee is going after one of the very few healthy sectors of the Wyoming economy - all according to the big-government philosophy that President Reagan so brilliantly summed up as "if it moves, tax it; if it keeps moving, regulate it; if it stops moving, subsidize it".

Again, the sales-tax proposal on the Revenue Committee agenda is not close to covering all $15.8 billion worth of spending on services, but it is a disturbingly convenient beginning. After all, if we apply the services sales tax on par with the sales tax on goods, the tax should - at least in theory - bring in well over $500 million per year. As designed by the Revenue Committee, it won't. But imagine what the committee could do with the tax if they got the legislative mandate to fundamentally overhaul our state's tax system...
Posted by Sven R Larson, Ph.D., Political Economist at 7:56:00 PM