Harriet Hageman and the CREG Report 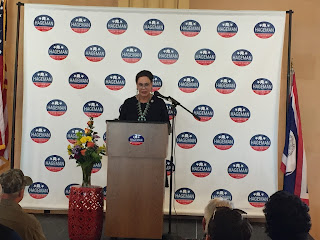 This morning Harriet Hageman gave her anticipated announcement speech: she is now officially running for governor. It was a powerful speech, promising, among other things, to fight federal regulatory overreach, to put together a regulatory renovation plan for the Wyoming economy, a transparent and efficient government, and no more using discretionary revenue to fund permanent spending.

She is a strong candidate, as far as I am concerned the strongest one we have seen so far. Her willingness to fight for deregulation, transparency and efficiency is a promising start on a route to a smaller, fiscally sustainable government. It will not give us everything we need, but it is a great down payment on a fundamental overhaul of the role that government plays in our economy. I don't know how far Hageman will be able to go down that road - taking on the regulatory bureaucracy is a daunting task in itself - but if she can accomplish what she announced today, she will have earned a lot of respect. She will have bought us more time to work up support in the legislature for structural reforms to major spending programs.

Hageman also expressed her understanding of the difficulties that lie ahead for the legislature. She does not envy their challenges going into the session. I don't envy them either, especially with the January CREG report in mind. It is the last one before the legislative session, and therefore will play a big role in the next couple of months.

I urge Hageman to study this report carefully. The message it sends only reinforces what I have been saying on this blog for well over a year now.

Before I get to the meaty part of the report, let me note that CREG - as always - spend a disproportionate amount of time talking about severance taxes and minerals-based revenue. This is what the legislature is asking for, no doubt, but perhaps it is time for the legislators to ask for a report that details sales, use and property tax revenue to the same degree as severance taxes. After all, for every $1 the General Fund gets from the severance tax, it gets $2.44 from sales and use taxes. It would be helpful to our legislators to get the same source detail on sales and use taxes as they get on severance taxes.

Now for the substance of the report. The biggest news is that the revenue forecast basically predicts stagnant revenue in the next few years:

There are two messages in this forecast. The first is about government spending: our legislators better darn well start working on permanent reductions in spending - right now - or the current deficit problems will be a walk in the park compared to what lies ahead.

This does not mean across-the-board haircuts; that type of cuts will reduce spending right now but do not alter the underlying growth mechanisms built into almost every spending program government has. What is needed is instead a concerted effort at reforming away those very growth mechanisms. It can be done, it should be done and it must be done.

The second message in this revenue forecast is about our state's macroeconomic weakness. Even though CREG predicts a slow increase in sales and use tax revenue, the annual growth rate - which, mind you, is in current prices - is so weak that it barely registers on the radar. Predicted 2022 sales-and-use tax revenue will be 9.3 percent below its 2008 level.

Think about that for a moment. A nine-percent decline over a 14-year span is a major decline in underlying economic activity. Even though about one third of the sales tax collections are related to minerals, and minerals are still going to be weak, in a strong, solid economy the stagnation imposed by minerals would have been more than made up for by sales-tax revenue from elsewhere.

That is not happening. In other words, here we have yet another indication of just how depressed the non-minerals part of the Wyoming economy is.

However, to be honest, minerals are not doing very well either, not even in the CREG report's forecast. On the one hand, I get the impression that this January CREG report - for the first time - comes with a built-in, deliberate pessimism as to future revenue from the severance tax. CREG has apparently gotten tired of being reminded of how their optimistic forecasts are defeated by reality.

On the other hand, this pessimism is not necessarily unwarranted. Before the Republican tax reform I would have predicted stronger future growth for the U.S. economy; now I believe we will be able to sustain something like 2.5-3 percent in good times - and that we won't see any more deep recessions for a while.

For Wyoming, and for our minerals industry, this means that we won't see any real growth in demand for coal, oil and natural gas. The CREG report reflects this forecast in its 2022 revenue outlook. By then, they say, General Fund severance-tax revenue will be at the same level that it was in 2003 and 2004.

The message for Harriet Hageman, other gubernatorial candidates and our legislators, is blunt: forget the years of milk and honey. They are not coming back. Get working on a new tax system that is more in tune with what the Wyoming economy can afford and support.

Which brings us back to the points I made above about Hageman's ideas for regulatory renovation, a transparent and efficient government, and an end to discretionary revenue being used for permanent government spending. The pressure on our elected officials to bring government spending in line with what taxpayers can afford, will only grow in the next few years. This pressure, then, comes on top of the already-existing difficult budget situation.

Harriet Hageman's announcement speech was promising. The first, admittedly broad strokes of her policy platform suggest that she can buy our state valuable time and lay the groundwork for a more prosperous future here in Wyoming. That is more than what I see in any other candidate thus far. The two questions that remain open are:

a) Will the legislature work with her on her main issues? and
b) Are they all willing to draw the right conclusions from this the latest CREG report?
Posted by Sven R Larson, Ph.D., Political Economist at 11:25:00 AM