Government Is Crowding Out Private Sector

Before Christmas, I published two blog articles where I analyzed the latest county-level wage and employment data. My focus then was on the message in those data regarding the current state of the Wyoming economy; the numbers confirmed that we are in a "new normal", a frail state of stability where the private sector needs all the peace and quiet it can get to solidify its new-found economic footing.

Today, we take another look at those county data, but from another perspective, namely the relative size of government employment and payroll.
The purpose is to examine whether or not it is correct to suggest that our government is crowding out private-sector employers in competition for the local workforce.

Without spoiling the real juice at the end of this article, the short answer is: yes, government is crowding out private employers. That does not mean our lawmakers - state and local - have done this intentionally; in fact, I tend to believe they haven't. Nevertheless, the effect of their actions, deliberate or not, is precisely that: a crowding out.

To get to the convincing numbers, let us first take a look at two sets of data on government-private pay parity. The Bureau of Labor Statistics reports average weekly wages for government and private sectors, by state and by county. The county-level data lags about six months, so the latest we have is from the second quarter of 2017. Nevertheless, here is the first comparison: 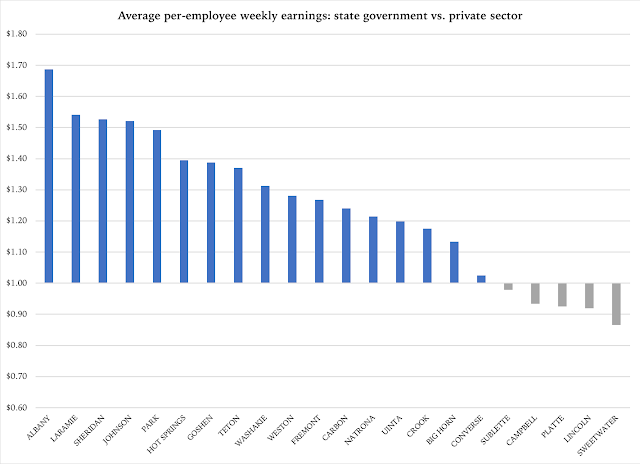 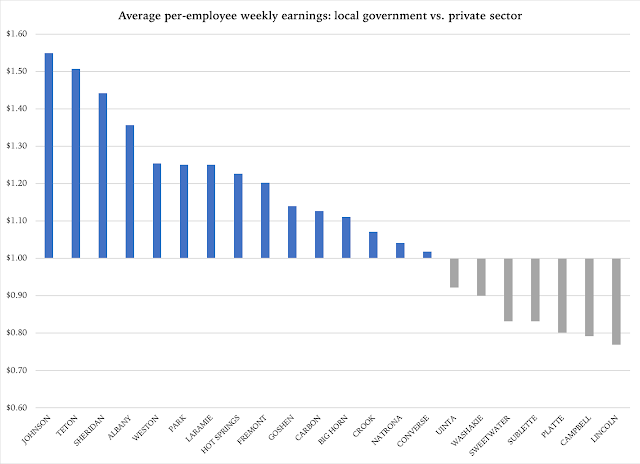 This time, in fifteen of the 22 data-supplying counties, local government paychecks are on average bigger than private-sector paychecks. The discrepancy is not as prominent here, but it is nevertheless there.

As I watched this data take shape, I could not help but ask if there would be a correlation between the government-private pay gap and the relative size of government. If the pay gap is larger in counties where government is a relatively large employer, then the theory that government crowds out the private sector would be confirmed.

It turns out I was right. Again... Figure 3 reports the same data as Figures 1 (black line) and 2 (blue line), then compares it to the percentage of total payroll earned in a county (columns).* A clear pattern emerges: in counties where the earnings by state and local government employees are a high share of total wages (see right-hand vertical axis), government also seems to be paying its employees quite a bit more than private employees (left-hand vertical axis): 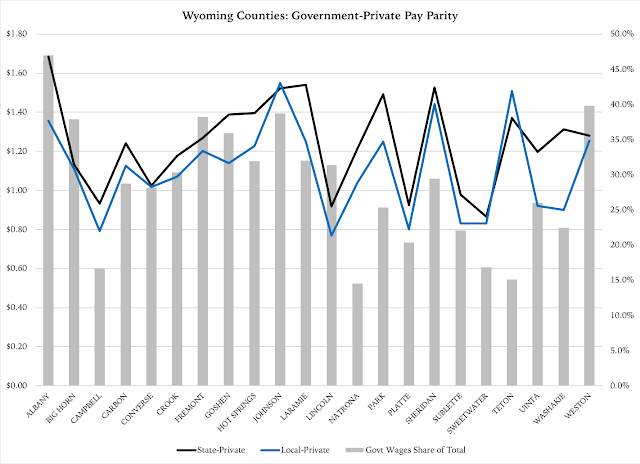 Let us look at the data from Figure 3 in a different way. In Table 1, the five counties with the highest government-wage share of total wages earned are grouped together in Row 1. Their average government-wage share is 40.3 percent. In these counties, the average state government paycheck pays out $1.38 for every $1.00 on the average private-sector paycheck; a local government paycheck is worth $1.29 for every privately earned $1.00.

As we move down to the next five counties, averaging 32.3 percent government wages, the pay discrepancy shrinks:

The counties are, by row:

It is abundantly clear that we need to reduce the size of government, which paychecks are artificially inflated by being backed up by taxes, in order to make room for an expansion of the private sector.

So, how do we end this vicious circle? At the risk of sounding like an old tape recorder... I once again refer to my plan for a fiscally sustainable government in Wyoming.
---
*) The federal government is excluded across the board. The reason is that we do not have jurisdiction over its employment and compensation practices; removing it allows us to concentrate on the private sector and the two levels of government we can control directly here in Wyoming. This is a debatable choice; some would rightly suggest that federal employment and payroll can make a noticeable difference in some counties, such as Laramie. However, that argument can also be turned on it head: with the exception of Laramie County, federal government employment and payroll make no distinguishable difference anywhere else in the state. Regardless of which approach we choose, the results reported in this article still stand.
Posted by Sven R Larson, Ph.D., Political Economist at 9:21:00 PM