...but the influx of federal dollars nevertheless create a rigidity in our state budget that gets in the way of sound, long-term reforms to government spending.* Since 2012, on average, our state Medicaid program has depended on federal funds for 54 percent of its expenses. The dependency is lower in K-12 education, though it has been growing there as well ever since the No Child Left Behind program was passed under the Bush administration.

However, when it comes to reforming away our dependency on the federal government, Medicaid - the cost of which is closing in on $600 million per year - must be at the top of the list. There are two reasons for this.

First, the regulatory attachment to the $300-million per year federal Medicaid funds is daunting. In terms of pages, the State Medicaid Manual reaches into four digits. For example - and this is literally randomly chosen out of the package: the U.S. Department of Health and Human Services mandates that states "same service to everyone in need", but does offer an exception for pregnant women. In order to explain to states that they can indeed tailor services for pregnant women specifically, here is what they say in Chapter 4, "Requirements and Limits Applicable to Specific Services", section 4130, "Comparability of Services", Part B, "Exceptions":

We should all be thankful to the federal government for having granted us, here in Wyoming, the permission to do this. How else would we have been able to help pregnant women under Medicaid? Obviously, we would never have come up with the idea ourselves, to tailor services for them, would we?

This example is not extreme. The entire regulatory dinosaur that comes with federal Medicaid funds is full of micromanaging efforts like this one. Some of them are simply redundant; others are destructive, such as the ban on the use of vouchers for interstate insurance purchases. If we could allow our Medicaid enrollees to buy insurance plans from other states - accordingly approved in that state - we could cut the cost of our Medicaid program significantly.

There are a couple of ways to achieve the kind of jurisdictional independence that we need for in-state Medicaid reform. Most of them fall short because they do not provide enough liquidity in the Medicaid system to let us achieve the desired reform results; we cannot simply cut off federal funds from one day to the next without having a ready-to-go reform plan in place.

At the same time, we cannot reform Medicaid while relying on the federal funds; with one exception that we will get to toward the end of this article. Therefore, in order to reform Medicaid on our own state terms, we need to combine a funding level, needed to run the program as-is, with the independence to implement a reform plan.

The only realistic way to do this is by fiscal re-routing. In any given year, we Wyomingites pay some $3 billion in personal, federal income taxes; in practice, part of that money is then turned around by the U.S. Treasury and sent back to our state in the form of Federal Aid to States. Instead of having that money pass through the federal government and come back here, why don't we simply enter an agreement with the federal government where our state needs to keep, directly, a portion of those federal income taxes equal to the federal funds?

Let us use the tax year 2015 as an example (the latest year for which the IRS has published state-level personal income tax data). We taxpayers in Wyoming paid $3.3 billion in personal income taxes to the federal government, and our state got $1.4 billion back. If we cut out the fiscal roundabout at the U.S. Treasury, we would instead send $1.9 billion to Washington and let them keep it.

With this fiscal re-routing we could maintain funding of what are now federally sponsored programs, yet remove the federal regulations and allow us to implement whatever reforms we deem appropriate. Then, as our state specific reforms reduce the cost of Medicaid (to again use that as the example), we can return the savings to taxpayers as a reimbursement on the "re-routed" portion of their federal income taxes.

If we made this model work here in Wyoming, it could set an example for other states as well. In fact, using 2015 data, all states except two - Mississippi and New Mexico - could fund their federal programs by means of this fiscal re-routing model. (If we tailor a solution for Medicaid on the side, all 50 states would be able to participate.) Figure 1 compares federal personal income-tax payments per state, to federal funds. For example, we here in Wyoming pay $2.33 to the federal government for every $1.00 we get in federal funds: 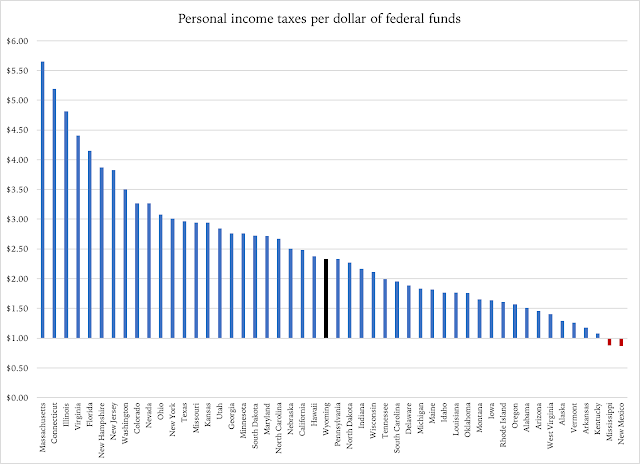 The only other option to fiscal re-routing is a genuine block-grant reform model. In this paper I explain how such a reform can be done. The idea is simple: separate the jurisdiction over "what" a program does from "how" to do it. The former jurisdiction remains with Congress, while the latter is given entirely to the states. Over time, we can change the funding model so that states gradually get fiscal control matching their operational independence.

Both these models could be run as state-specific experiments, perhaps as part of an economic freedom-zone project. That, however, is an issue we will have to return to later.
---
*) It is worth noting that NASBO, the National Association of State Budget Officers, uses a different definition of federal funds than the federal government. Federal statistics over federal funds in state budgets classify severance payments from the federal government as federal aid to states in the same manner as funds for Medicaid or milk in school cafeterias. Therefore, when we use federally sourced data to study federal aid to states, Wyoming's dependency jumps considerably.