Last week I reported on a slight improvement in the job market in Wyoming, but I also pointed out that it was combined with a negative trend in wages. Today, we are going to take a look at more county-level data and what it means for the near-term future of our state's economy.

To begin with, during the economic decline our state has seen a notable decline in private-sector business establishments.
This decline has been tough on most parts of the state, and as Table 1 shows, the decline continued throughout the first half of this year (the latest period for which there is available data) compared to the same period last year:

When the number of active businesses is down in 12 counties in the second quarter, it is a clear signal of a weak tax base, primarily but not only the property tax.

Another sign of a retreating business sector is the average number of employees per active business. Table 2 reports this number by county, second quarter each year for the past ten years; the last column shows the change over the entire ten-year period. Numbers for 2017 that are in bold represent counties where businesses, on average, have reduced the number of employees in the past year: 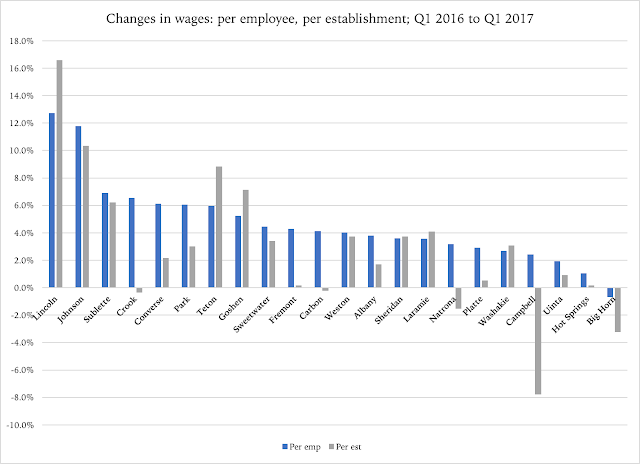 In the first quarter, there was not a strong correlation between per-employee and per-establishment wages. Such correlation would show resiliency in the economy, especially if there were a consistent trend upward in wages.

The correlation is more pronounced in the second-quarter data, though as mentioned, the per-employee growth rates are not as strong as they were in the first quarter. Per-establishment growth is a bit more coherent, though the spread is also more established: 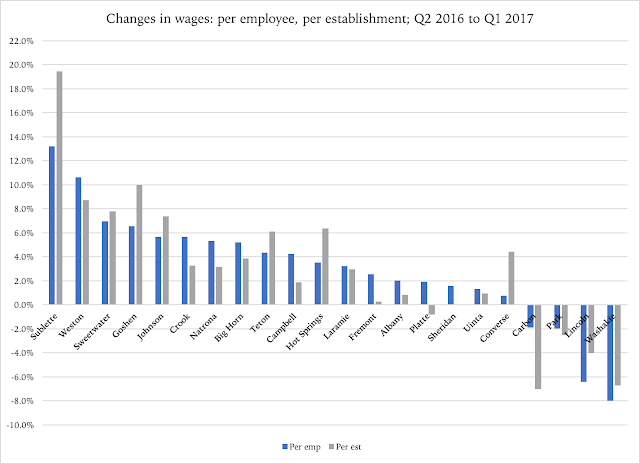 In conclusion,
With this, Wyoming Prosperity will take a holiday break. Merry Christmas and see you back here on the 26th!
Posted by Sven R Larson, Ph.D., Political Economist at 10:24:00 AM