New county-level jobs and earnings numbers are in. The results are encouraging and disappointing - but even more so: predictable.

Let us start with the encouraging part. In my last county-level labor market analysis, I noted that in the first-quarter private sector jobs numbers, only four counties saw growth in private-sector employment. For the second quarter, six counties climb into the job-growth bracket compared to the same quarter last year: 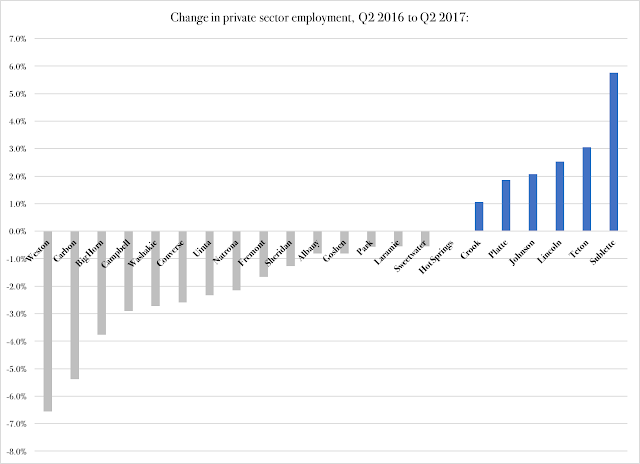 The jobs trend is overall less negative for the second quarter of this year than it was for the first quarter. This is consistent with the "new normal" scenario that I laid out already six months ago. Our state is not going anywhere positive, but we are in a frail state of stability. In theory, we could remain here forever; there is no such thing as an automatic economic "recovery".

In practice, with the right kind of policy reform we can expect growth and sustained private-sector expansion. That said, the wrong kind of policies will send us into another episode of macroeconomic decline.

As a warning sign of what that means, here is the disappointing part: looking at wages per job, the overall trend is weaker than it was in the first quarter. Table 1 reports change in per-job wages for, respectively, the first and second quarters in 2017 compared to 2016. In the first quarter, only one county saw overall decline in per-job earnings in the private sector; in the second quarter four counties ended up in the red. To further confirm the weaker trend, in the first quarter, six counties had a per-job earnings growth of less than three percent, while in the second quarter ten counties fell into that category. This, while not much happened at the other end of the table:

No. These two trends, which seem to point in opposite directions, actually confirm the "new normal" scenario. The jobs numbers confirm stabilization; employers no longer need to lay off workers are they did - generally, they have reached a balance between costs and revenue. The per-job earnings numbers convey the same message: while the threat of losing one's job is no longer acute, the jobs that still exist - and are created - do not offer quite the same level of pay as many were able to find before the downturn.