Yesterday, the Republican leadership in the House of Representatives finally presented their tax plan. Or reform, if you want to be generous.

This is not a great reform. Or plan. By a stretch, it is a good plan. The most accurate conclusion is that it is "alright". Halfway between a cheeseburger and broccoli.

Don't get me wrong - there are a couple of really good features in this tax plan. The cut in the corporate income tax stands out as the single best idea of them all, especially since it is combined with a full expensing of business investments. This is going to have substantial effects in capital-intensive industries, and it is definitely going to make us stronger in the next recession.

There is also some good news for Wyoming in this bill; see the end of this article.

Another good feature of the Republican tax plan is the nearly doubled standard deduction, which for a married couple filing jointly will now be $24,000. We should also applaud the reduction of the number of tax brackets in the personal income tax, from seven to four. Oh, and the Alternative Minimum Tax will be repealed.

Assuming that all these features survive the assault on everything Trump that awaits in the Senate, these features will be good for the economy. The problem is that the plan also contains features that will work in the opposite direction:

-The EITC stays untouched. This entitlement program has already created one of the highest marginal tax rates in the federal personal income tax code. As I explain in my new book (chapter 2, pages 16-18), the EITC can create marginal income tax effects that you otherwise will not encounter until you make more than $400,000. That alone discourages people from accepting promotions, strengthening their skills and even starting a business.
-There is a new child-based deduction. This one is not tied to your income - at least not in the version I have seen - so in theory it is not as problematic as other entitlement programs. The problem is that families with children are typically at the lower end of the income scale - they are younger and they tend to work part time more than others - which makes many of them eligible for the EITC. Combine these two, and add the increase in the standard deduction, and a family with two kids can as much as $44,000 without paying a dime in federal income taxes.
-Concentration of tax burden to higher incomes. I will elaborate on this problem in a moment. For now, let us note that there is no reduction in the highest tax rate of 39.6 percent - though its kick-in income level increases to $1 million - while at the same time the tax plan cuts the mortgage deduction from $1 million to $500,000. Even if there is no absolute rise in effective taxation of higher incomes, relatively speaking the increase is more than noticeable: the federal government is going to rely even more on a small group of high-income earners for 80 percent of its tax revenue.

When high-income earners end up breaking even from this tax reform, or marginally on the losing side, there are no new incentives for them to build businesses or furthering their professional careers. The many small business owners who file under the personal income tax are not encouraged to develop their businesses. The one way out for them is to incorporate and take advantage of the lower corporate income tax; it is an open question whether or not this will happen. It is a leap to incorporate, one that not every small business owner is willing to make.

We need better, stronger and more reliable incentives for our small business owners. The U.S. economy has been ho-humming forward for some time now, but the "Trump spurt" we have seen so far this year is showing signs of maturity. Figure 1 reports the inflation-adjusted, annual growth rate for GDP (black) and the same growth rate for private consumption (green). While the GDP growth rate has accelerated, this growth period appears to be reaching its peak. The same happened in private consumption already six months ago: 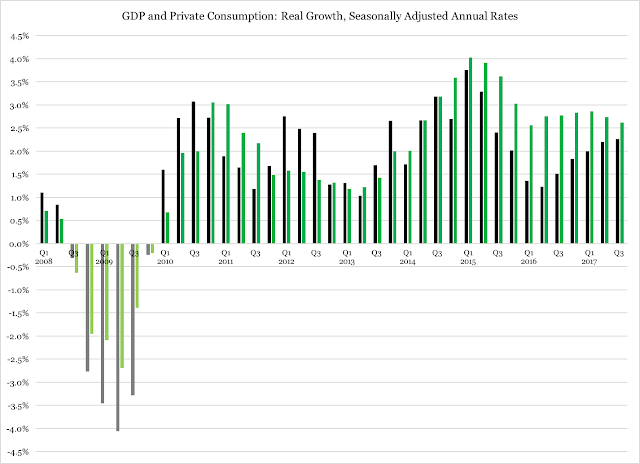 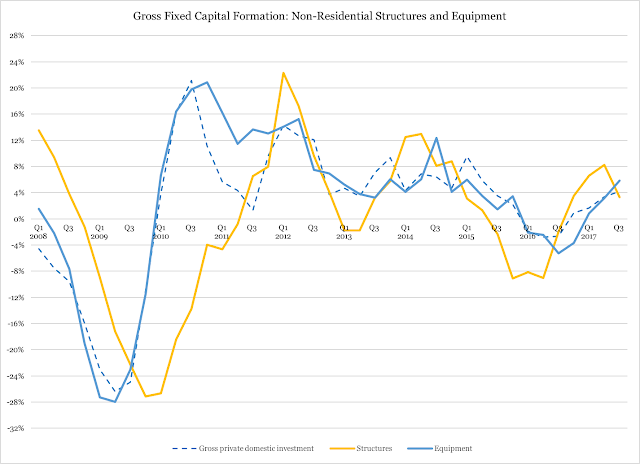 Value-added GDP data confirms this: the goods-producing sector has made a strong contribution to our economy for almost a year now. However, this growth in business investments - also known as gross fixed capital formation - is now coming to an end. To guarantee a sustained growth period, we need a tax reform that is equally kind to big and small businesses: while the cut in the corporate income tax is going to benefit big businesses, it would take a cut in the personal income tax to benefit small businesses (where the bulk of the growth potential happens to be).

Bluntly speaking, if we don't get more tax cuts for the rich, we will not be able to sustain the growth period we are in right now.

We have yet another problem with the tax plan, one that nobody appears to be looking at. In their effort to relieve even more low-and-middle income families of their federal income tax burden, the Republicans in Congress are pushing the federal government's revenue dependency onto the shoulders of even fewer high-income earners. This is in itself a recipe for revenue instability, but even as that burden is concentrated onto work-based income in the higher earning layers, it is more than likely that this tax base will stagnate, even shrink over time. High-income taxpayers earn a larger share of their personal income from investments than other taxpayers do; since taxes on interest, dividends and capital gains are left unchanged in this tax plan, the incentive remains for high-income earners to shift their earnings from labor to capital, so to speak.

As a result, we will continue to see a decline in the share of our total personal income that comes from wages and salaries (see gray columns in Figure 3 below). The tax reform does nothing to roll back the dependency of the poor and the middle class on entitlements. Therefore, the entitlement share of personal income will continue to rise or at least remain high (red). Perhaps, though, we may see a slow rise of income from investments or capital (blue), as the tax advantage of such income remains: 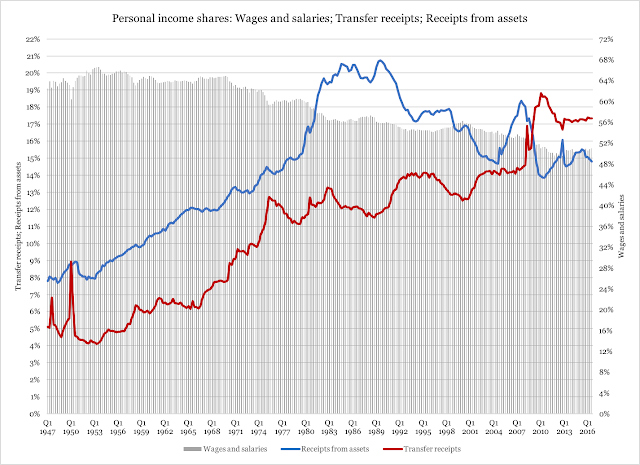 That said, if high-income earners continue to shift their earnings from work to investments, the tax revenue situation for the federal government will become increasingly volatile. To recap:

-it will depend even more critically on high-income earners, whose earnings are often based on bonuses, projects and small-business activities, thus making them less long-term stable than incomes in lower brackets;
-it will leave in place the incentives for high-income earners to reduce their dependency on work-based income, onto investment-based earnings, which are also more volatile than lower work-based incomes; and
-it does nothing to reduce America's dependency on entitlements.

So what does this reform mean for Wyoming? In a nutshell, not as much as we could have hoped for. On the upside, the reduction in taxation of lower incomes will provide some relief for families in the thick of non-minerals, private employee earnings. As the table below shows, in those households 75-80 percent of their income is from work, so the higher standard deduction should provide needed relief for them.

On the downside, there is nothing happening in higher income brackets, where the dependency on work-based income is considerably smaller:

To get an idea of what this tax plan could do for Wyoming, we would need a detailed tax-filing model allowing for complete recalibration of tax brackets. Until we get there, we can make a somewhat speculative assumption and get a first idea of what this plan could do for the Wyoming economy. Suppose that all families earning less than $45,000 would no longer pay a personal, federal income tax. Using the latest numbers from the IRS, which are from 2015, this would leave something like $150 million in taxpayers' pockets. Now: we have had some outbound migration since then, and lost approximately 17,000 private-sector jobs, so this number is on the optimistic side. But we can stick to it under the assumption that it includes tax cuts for incomes above $45,000.

An injection of $150 million into the pockets of Wyoming consumers could generate as much as $550 million in higher economic activity throughout the state. This would materialize over a period of about two years (a reasonable period for a consumer multiplier to work its way through every corner of the economy) but would be a much-welcome injection of spending power into local communities. It is an approximate 2.5-percent increase in consumer spending, but it would probably be concentrated toward core consumer spending such as groceries, clothes, new cars and more local travel, as well as local services such as home repair and child care. Retail and small, local, family-owned businesses would benefit.

Again, these numbers are approximate and should not be taken as a definitive macroeconomic verdict on this the first stab at a Republican tax reform. However, it gives a preliminary, ballpark idea of what this reform would mean for Wyoming.

There is just one problem. I have said for some time now that our state can absorb tax increases of about $200 million if we get a sensible tax reform from Congress. These preliminary numbers on the benefits of the Republican tax plan confirm that assessment. If we add the corporate income tax cut and do a more detailed assessment of the cuts in individual taxes, the Wyoming economy will be able to tolerate a tax hike of $200 million.

That, however, would mean that we get no advance in private-sector activity: all that happens is that the state government absorbs the entirety of the federal tax cuts. Families, small businesses, consumers and taxpayers in Wyoming are left with nothing more than they have today.

This would be bad for many reasons, one being that the in-state tax hikes are not going to lead to any increased economic activity whatsoever: their strict, only purpose is to prevent reductions in government spending. They won't expand any economic activity anywhere, not even within government.

Alas, we have a choice as a state. We can either choose to pass through whatever Congress enacts in terms of tax cuts, from our pockets into the state government coffers; or we can choose to keep those tax cuts, spend the money where it makes a difference and give our struggling local economies a much needed boost.

This is not just a hypothetical choice. It is very much reality: just the property tax increase that the Revenue Committee is going to discuss next week would absorb more than $140 million of that $200-million wiggle room. Add to that all the other tax hikes they want, plus the tax hikes that our counties, cities, towns and school districts would like to see, and the federal tax cuts we can hope for will fade away in the shadow of a towering TaxZilla, born, bred and raised right here in Wyoming.
Posted by Sven R Larson, Ph.D., Political Economist at 8:59:00 AM