Today, the Revenue Committee gets together here in Cheyenne to decide what tax hikes they are going to send to the legislature for its 2018 session. Predictably, as part of their arguments, the tax hikers once again rely on the so called "funding gap" chart from the Economic Analysis Division. This chart is supposed to show that we taxpayers only pay for a few percent of what we get from government.


During last session exposed the flaws in this "funding gap" chart. It is time to re-publish my analysis. Here it is. 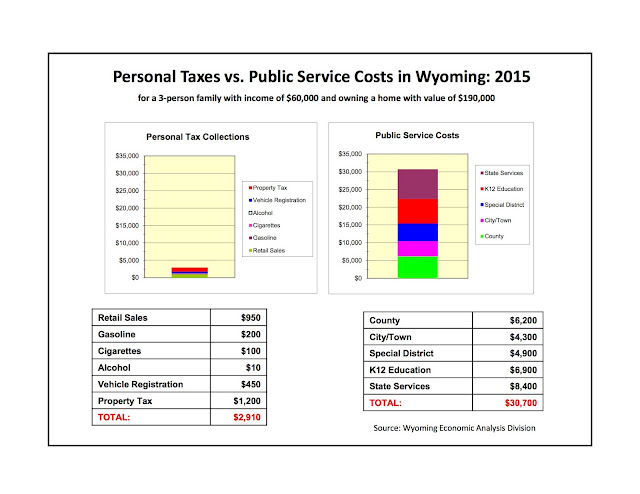 This chart, which I have seen different versions of over the years, was sent to me by a blog reader who legitimately questioned its integrity. The reader was right in doing so: this chart, I am sad to say, is, for lack of a better term, a fraudulent attempt at misleading Wyoming taxpayers.

Let us set the record straight.

It is unclear from the EAD's website what calculation method they have used to produce the chart. They have either included federal funds in the right-hand column, or they have omittted it. By means of "backward engineering" their calculation method, I am leaning toward the federal funds being included, but just to be sure, I will add a note at the end of this article based on the assumption that federal funds are excluded entirely.

Alas, let us begin. The first problem with their chart is the size of government. If we leave their calculation method alone for a moment, the implication of the chart is that we need to massively raise personal taxes in order to close a "funding gap". But already here, the chart misleads us: as I have pointed out over and over again, our state and local governments here in Wyoming are bigger, relative the private sector, than in any other state in the union. Without reiterating the entire argument here, let me just point out that if we:

a) use the number of government employees as a proxy for the size of government; and
b) reduced the size of our state and local governments to the same level, relative the private sector, as they have in Nebraska,

Almost $1.6 billion on an annual basis is not peanuts. Suppose, now, that we reduced the number in the right-hand column above by simply downsizing our government to the same relative size as our Nebraska neighbors are living with. This means an 18-percent cut out of the $30,700 bottom line, down to $25,174.

Of course, we could reduce our government size to the national average. Dare we do that? Didn't Governor Mead in his State of the State speech say that our government is "bare bones"? Wouldn't that mean that any reduction in our government would be an unmitigated disaster?

Maybe our governor believes that this is the case. If so, he must lie awake at night, tossing and turning in agony over the deplorable state of government services in every other state of the union, especially those that are - yikes - at the national average. Imagine the horrendous state of schools, roads, welfare and other government services in stone-age states like Texas, Maryland, New Jersey and Missouri.

Let us be brave, though, for a moment. Let us assume that our fellow Americans in Annapolis, MD or Princeton, NJ can actually send their kids to functioning schools, drive on driveable roads and still have police that keeps their neighborhoods safe. So let us reduce the right-hand column in the chart above to national average.

Now, let us turn our attention to the left-hand column, which in the EAD's chart is barely visible without a fiscal magnifying glass. Assuming that the EAD has included federal funds in the right-hand column, but excluded them from the personal-tax column (which they clearly state that they have), we need to correct this imbalance before we do anything else.

Federal funds are paid for with our tax money - in other words, we send money to the U.S. Department of Treasury, part of which they then turn around and send back to our state as "Federal Aid to States". This is a problem to the EAD, because they include the federal funds in the right-hand column but ignore them in the left-hand column.

So, let us add the part of our personal, federal income taxes that comes back to us as Federal Aid to States. Using what seems to be the most likely calculation method behind the EAD's chart, we can now add $5,096 to the left-hand column, which therefore increases from $2,910 to $8,006.

All of a sudden, the EAD chart looks a little different:
But wait - we are not done yet. We cannot leave the severance taxes out of the picture. The reason why the EAD is omitting those is that they assume that a minerals company does not burden its employees with the severance taxes. They think that a coal company can simply add the severance tax as a mark-up on the price of a ton of coal, and collect that directly from their buyer.

Why else would they ignore the fact that taxes paid by businesses are in fact paid by their employees?

Anyone who has ever worked in the private sector, as a business owner, manager or employee, knows that the taxes the business has to pay are taken out of the company's general revenue. Taxes are operating costs just like utility bills, facility maintenance, purchases of inputs or merchandise, etc. Because taxes are an operating cost, they have to be paid before the business can pay its employees; higher taxes means there is less left for those who bring in the money that pays those taxes.

In other words: severance taxes are forfeited compensation for the employees, managers and owners of minerals companies. Therefore, they are also paid by those who live and work in Wyoming and should be added to the production of tax revenue that adds up to the left-hand column.

Using a rough estimate (based on comprehensive government-finance data from the Census Bureau), severance taxes add about half as much to the left-hand column as federal taxes, or $2,732 to be exact.

The difference between the two columns, as presented by the EAD, was $28,990, or 94.4 percent. The implication was that we the Wyoming taxpayers only pay for 5.6 percent of the cost of our government. Setting the record straight, we have now reduced the "funding gap" to 36.4 percent.

But not even that number is actually correct. We now have to take into account all the property taxes, sales taxes and other taxes paid by Wyoming businesses - in other words by their employees, manager and owners in the form of forfeited compensation - and the gap between the two columns almost goes away.

And now for the note on omitting federal funds. Assuming that the EAD actually took federal funds out of the picture (which seems unlikely), then all we have to do is adjust the left-hand column for the taxes that we pay through our employers. Just the sum total of property taxes, sales and gross receipts taxes, and miscellaneous revenue for state and local governments increase the left-hand column to $26,500. With the right-hand column still at $30,700, the EAD's "funding gap" is almost eliminated.

Whichever method the EAD has used to produce their chart, it is disingenuous and does us no good in our efforts to try to save our great state from an already-unfolding fiscal disaster.
Posted by Sven R Larson, Ph.D., Political Economist at 7:07:00 AM