How many times have you heard that Wyoming needs a big government because we are a rural state? I have heard it so many times that I decided to do a little number crunching to see whether or not there is any truth to this statement.

The answer is: no. Wyoming is still an outlier, perhaps even more so in this context than usually.

To measure how "rural" a state is, I pulled population density numbers from the Census Bureau. These numbers compare 2016 population estimates to the square-mile land area of each state. As a measurement of government size, I calculated the Government Employment Ratio (GER) for each state. These numbers were based on 2016 annual employment averages from the Bureau of Labor Statistics.

To make the numbers for density somewhat more manageable, I adjusted the actual numbers - the actual population to land area ratio - to its deviation from the national average. This means, plain and simple, that if a state has a density number of 100, it has the exact same population density as the country as a whole.

If the argument by friends of big government is correct, states with low relative density numbers should have comparatively high GERs, and vice versa. At first glance, it looks like they are correct: I grouped the 50 states into quintiles, based on their relative density score, and then added the GERs for each quintile. The results are displayed in Figure 1: 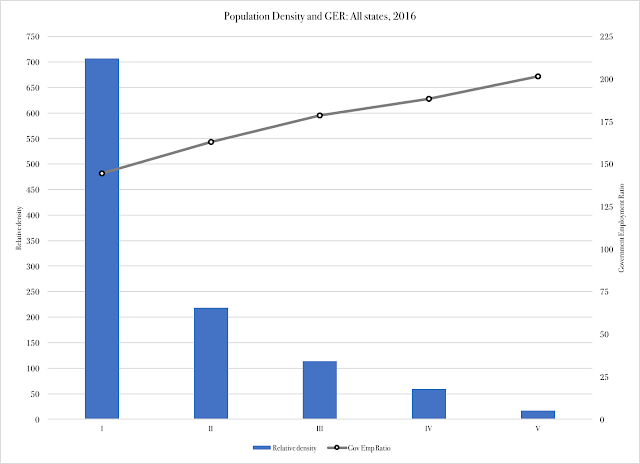 Here are the average relative density and GER numbers per quintile:


Again, at first glance, it looks like Wyoming would need a large government because of its population-to-land ratio.

That question becomes even more relevant when we look at Montana, whose relative density score is 7.8. Their population density is only slightly higher than ours, yet their GER is 207. In other words, they are about as rural as we are, yet their government is only two thirds the size of ours.

There are more examples:


Nevada's population density is 2.1 percent of New Jersey's, yet New Jersey has a GER of 163. Should not these numbers be the opposite - by a hefty margin - if the argument were true that a rural state needs a big government?

Even if we accept the overall trend in Figure 1, which we should, this still does not even begin to justify why we should have a government that is 50 percent larger than the Dakota states, or our "rural" proxy, Montana. Nor does it explain why Alaska can get by with a government that is smaller than ours, with a relative population density that is only one fifth of ours.

There is more to say on this issue. For now, though, let us note that whenever someone brings up the "rural state" argument for big government, we have the facts to refute it.