A blog reader sent a link to an article over at Ballotpedia, discussing the ratio of state and local government earnings to earnings in the private sector. The article, published under Ballotpedia's Verbatim Fact Check banner, explains its purpose:

In a column in September about Connecticut’s budget woes, Matt Walter, executive director of the State Government Leadership Foundation, urged the governor to endorse changes to state-employee union benefits. According to Walter, "Connecticut is extremely generous with its employees, who earn 42 percent more on average than the average private-sector worker in the state — the highest disparity in the country." Is Walter correct? Do Connecticut state employees earn 42 percent more, on average, than private-sector workers in the state? Is that the highest disparity in the country?


The reader wanted to know what the numbers look like in other states, especially Wyoming. We will get to those numbers in a moment; first, let us look at what Ballotpedia says about the data they used in their fact check. The source was the Bureau of Economic Analysis employee compensation data, which, says Ballotpedia,

These numbers are close to what the BEA reports, but not quite on the mark. Before we get to data from all states, let us straighten out the methodology. In a footnote to their article, Ballotpedia explains that they

With the right methodology in place, the per-employee calculation of compensation per employee comes out as follows, measured as
Figure 1 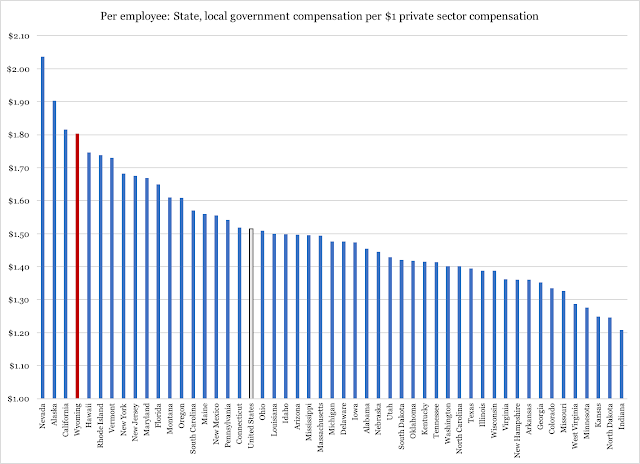 In every state, the average state or local government worker earns at least $1.21 per $1.00 earned by the average private-sector worker. The Connecticut number is $1.52, while in Wyoming the earnings discrepancy is $1.80. The highest discrepancy is $2.04, in Nevada.

Breaking down government employment by state and local governments, the five highest discrepancies on the state side are:

As for local government earnings vs. private, a similar account looks as follows:

As for Wyoming, we can note that we are in the top five when it comes to compensation discrepancy. When we pair this with the fact that we have the highest government employment ratio in the country, we are once again back to one of the structural problems in our state's economy: too much government, too little private sector to pay for it.
Posted by Sven R Larson, Ph.D., Political Economist at 11:33:00 AM