Yes! Time for another update on employment and earnings by county! Today, let us take a look at employment.

As explained in the September TRENDS report from the Department of Workforce Services, some parts of the state have - not surprisingly - taken a bigger beating than others.
The counties hit the hardest by unemployment are Campbell, Converse, Fremont, Natrona, Sweetwater and Uinta, all of which have an unemployment rate above four percent. Best off are Albany, Crook, Goshen, Lincoln and Teton, where 3.1 percent or less of the workforce is idling involuntarily.*

However, unemployment is an imperfect measurement of a state's economic strength. Unlike a country, a state has no restrictions on labor force migration across its borders. Therefore, it is more accurate to look at employment numbers, in particular for the private sector. 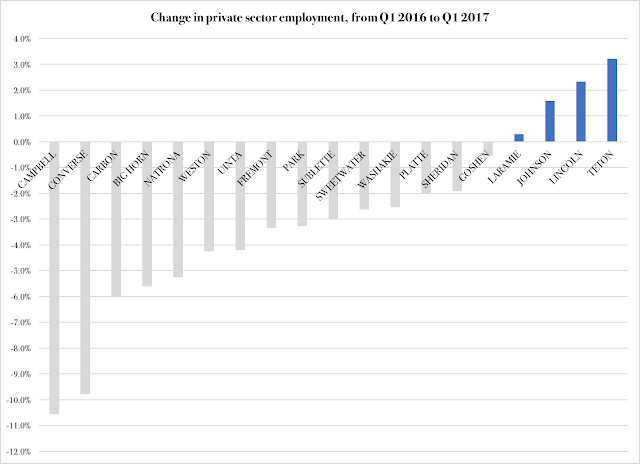 It has been the trend throughout the long 2015-2017 downturn that only 3-4 counties have shown positive job trends. Teton has traditionally led the crowd, with Johnson and Lincoln in the same category, though to highly varying degree.

One of the enduring problems with this most recent economic downturn has been the rigidity in government employment. We have heard loud laments from school administrators over two or three layoffs (in counties where thousands have lost their jobs in the private sector) and we have seen the efforts of tax hikers in the state legislature.

At long last, it looks like there have been some adjustments in the government workforce to somewhat accommodate for the often-serious losses of private-sector jobs. The green function in Figure 2 shows changes in state-and-local government employment by county, for the same period as in Figure 1, with the changes in private sector jobs added for comparison. For example, while private-sector employment fell by 10.6 percent in Campbell County, state and local government in that county reduced employment by 4.3 percent (a detailed, county by county table follows at the end of this blog article): It is a bit of a relief to see that the government workforce is being adjusted, at least moderately, to changes in private-sector jobs. This is a beginning - but only a beginning - of a much-needed downsizing of government here in Wyoming.

One of our major problems in our state is that government has become a critical employer in too many counties. Figure 3 reports the Government Employment Ratio by county; the GER is the number of state and local government workers per 1,000 private-sector employees. The black function illustrates the statewide GER average of 306, which means that a majority of our counties have a higher-than-average dependency on government jobs: 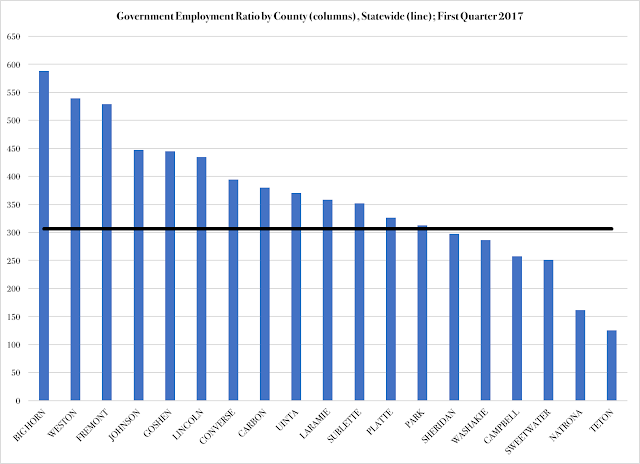 Since Wyoming has the highest GER of all states, the above-reported county-based GER numbers are quite serious. Three of our counties, Big Horn, Weston and Fremont, have a higher GER than the most government-dependent nations in Europe.

After the footnotes follow three tables with the data off which the Figures are derived. Enjoy this short overview of your county's economic performance; there is more coming in follow-up articles!
-----
*) The TRENDS report also puts Niobrara County in the best-off category. However, since BLS jobs data from Niobrara is spotty, to say the least, I leave them out.
**) The counties reported are selected exclusively based on data availability. Those that are not included are left out for lack of reliable data.
-----