There are many reasons why we need to stop habitually cry for higher taxes as soon as a budget deficit opens up. For one, a few hundred million dollars of higher taxes would throw us straight into a new depression - the serious downturn we have just been through would be mild compared to what $400 million in higher taxes would do to us.

However, there is also a broader issue here, one that is often overlooked. The habitual cry for higher taxes is not just a way for government employees and conventionally-minded politicians to preserve "business as usual" (or "government as usual"), but it is also a way to preserve, promote and prolong the welfare state.

The welfare state is not just an abstract idea. It is much more than that. It is a big weight on our shoulders, of such profound proportions that it is slowly but steadily bringing our entire country toward an economic standstill. I explained the economic theory behind this phenomenon in my 2014 book Industrial Poverty; in my latest book, The Rise of Big Government, I explain in detail how the American welfare state is gradually grinding our economy to a halt.

If we wish to remain a prosperous society, we have to roll back the welfare state and get government out of the business of economic redistribution. This is necessary nationally as well as at the state level.

Some would, rightly, use recent GDP numbers as a counter-argument to make the case that we are returning to a three-percent average. Alas, there is not much to worry about. This, however, is a short-sighted analysis: in view of the longer trends in our economy, it is an anomaly. Government is already a heavy enough burden on our economy to keep us from sustaining 3+ percent growth over time.

Slow growth has many negative consequences, one of them being the erosion of welfare-state funding. Deficits have become a third pillar of paying for government spending, in addition to taxes and fees. This is what we are experiencing right now, here in Wyoming; for our nation as a whole, this problem is pervasive and there is no end in sight to the continuous accumulation of more debt on our children's shoulders. Figure 1 explains: 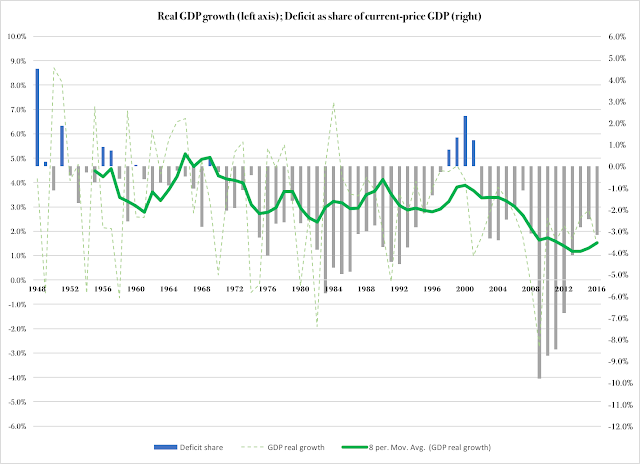 Source: Office of Management and Budget

The columns represent the federal budget surplus (blue) or deficit (grey) as percent of current-price GDP; see the right vertical axis for values. The green function reports real GDP growth as an eight-year moving average (left axis). Trend-wise, we are deep below the three-percent average that we need to sustain to have solid, lasting growth in our economy. We have even dropped below the two-percent average that prevents our standard of living from slowly deteriorating.

Sluggish growth draws down the growth in tax revenue; supply-side tax cuts (Reagan, Bush) give the welfare state infusions of new revenue that last for a few years. After that, though, we are back to the long-term drift into economic stagnation. The effects from such tax cuts are clearly visible on federal tax revenue, as reported in Figure 2. After the Carter disaster with inflation generating unsustainable increases in income-tax revenue, there was a temporary dip in 1982 and '83, right before the Reagan tax policies began having an effect. In 1984-88, federal tax revenue grew at healthy levels; the dip in the early 1990s were followed by another relatively strong revenue-growth period during the 1990s combination of fiscal conservatism - courtesy of John Kasich and Bill Clinton - and the first internet-based tech revolution.

After the Millennium recession, it has been difficult for the federal government to sustain large growth rates in tax revenue. The peak around 2004-2006 is the result of the Bush tax cuts, but since then revenue growth has, on average, gradually become more sluggish.

Without structural reforms on the spending side, this will only increase our deficits in the future; whatever tax cuts will come out of Trump's efforts will generate little more than an infusion of more tax revenue like the Reagan and Bush peaks. 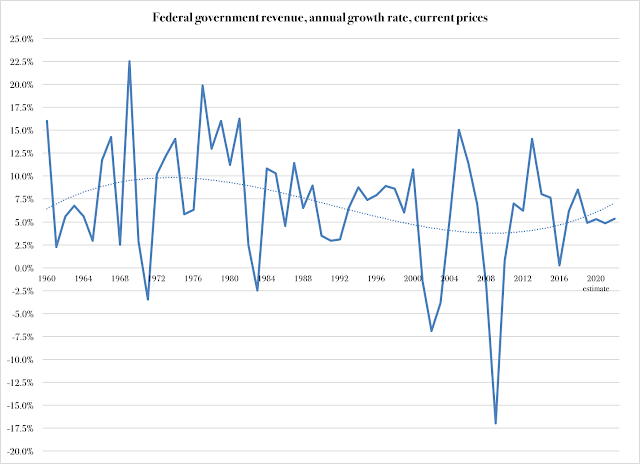 Source: Office of Management and Budget

Not surprisingly, on October 20 the Wall Street Journal explained:

The federal budget deficit widened in fiscal year 2017 to the sixth highest deficit on record as government spending growth outpaced growth in tax collections for the second year in a row, the Treasury Department said Thursday. The budget shortfall rose to $666 billion in the fiscal year that ended on Sept. 30, up $80 billion, or 14%, from fiscal year 2016. That tracks with an estimate from the Congressional Budget Office, which had predicted a $668 billion deficit for the last fiscal year.

This all happened despite the fact that, the Journal says,

Federal tax receipts reached a record high in fiscal year 2017, at $3.3 trillion, thanks to slightly faster growth, according to a senior Treasury official. But government outlays also hit a record high last year at nearly $4 trillion, 3% higher than they were in the previous fiscal year, thanks to increased spending on Social Security, Medicare and Medicaid, as well as higher interest payments on the public debt.

This one, right here - interest payment costs - is a bomb waiting to go off in our federal budget.

Unfortunately, as the Wall Street Journal article continues, people draw the wrong conclusions from these numbers:

As a percentage of gross domestic product, the deficit totaled 3.5%, up from 3.2% in fiscal year 2016. “Today’s budget results underscore the importance of achieving robust and sustained economic growth,” Treasury Secretary Steven Mnuchin said in a statement accompanying the report. “Through a combination of tax reform and regulatory relief, this country can return to higher levels of GDP growth, helping to erase our fiscal deficit.”

The growth rate needed to close the deficit with current government spending is - to put it nicely - unattainable. Mnuchin's hope of sustained, high GDP growth is a pipe dream so long as nothing happens on the entitlement side of the equation.

Fortunately, some of the President's people have some insight into this problem. The Wall Street Journal again:

Mick Mulvaney, the White House budget director, said the figures “should serve as a smoke alarm for Washington” and a reminder to “get our fiscal hour in order.” ... Declining government revenues and long-term costs associated with an aging population, including higher Social Security and Medicare spending, are expected to continue pushing up deficits over the coming decades.

While we are waiting for sound, solid and sustainable entitlement reform at the federal level, we should start right here, at home, in our state. We need to open A New Chapter for Wyoming. With growing resistance to tax hikes, the case for spending reform grows stronger by the day.
Posted by Sven R Larson, Ph.D., Political Economist at 11:23:00 AM