This blog's readership continues to grow! August was a record month, and September reader volumes inched even a little bit higher. Thank you, Wyoming!

There is a lot to get to this week. We now have a good idea of just how big, broad and serious the threat is to our state's economic future. Those who claim they are working the hardest to save us - our Governor and the legislative leadership - are in reality the ones whose policies are the greatest threat to the future of this great state.
Just between the governor's ill advised ideas for "economic development" spending and the tax increases that the Joint Revenue Committee is considering, we may very well be looking at half a billion dollars in higher taxes in the coming two years.

Then we have the local tax increases that Wyoming Association of Municipalities is asking for. But that is not all: there are individual tax hike demands from local governments, from Campbell to Teton counties, that add yet more bricks onto the load that taxpayers are supposed to carry.

I want to get to the local tax increases this week. First, though, I have to get back to the personal-income data that we discussed last week. The reason is that these numbers are being spun in such a way that they can motivate half a billion dollars in higher taxes. But as we will see in a moment, you cannot paint a rosy picture with gray colors.

First, though, a quick comment on the GOP tax plan, an issue that plays into the discussion about higher taxes here in Wyoming. Friday last week Representative Cheney was on KGAB here in Cheyenne and commented, in part, on that plan. She did a good job defending it, especially its somewhat imbalanced distribution profile. By raising the point in the income scale where people become federal taxpayers, the reform narrows the population actually funding the federal government. This is a feature the tax plan that is simply there because we still prefer progressive income taxes to a flat tax.

That said, Cheney rightly pointed out that the entire package alleviates the tax burden on higher incomes as well, and that the cut to the corporate income tax is a very important part of the package. If it goes through as it is, Cheney is correct in that it will be a real infusion of growth into our economy. The Trump surge in macroeconomic activity will continue.

On the other hand, if she and her fellow Republicans fail, the economic consequences will be serious.

As I have explained in a couple of articles now, Wyoming desperately needs Republican success on the tax reform front.

With that said, let us turn back to the Wyoming economy itself, where a blip on the macroeconomic radar is again being oversold to some degree. However, this problem is not nearly as serious as it was back in June. Back then, I explained that state chief economist Jim Robinson was engaging in dishonest macroeconomic analysis. Admittedly harsh words, I did explain in detail why I came to this conclusion.

Having taken my criticism to heart, this time around Robinson is more measured. We should appreciate that. It is a sign of intellectual decency when someone is willing to listen and better themselves based on your criticism.

We don't want people to get overly optimistic ... We've seen a rebound in mining, so it looks like the state economy is no longer contracting. It's staring to show gains in certain areas, but they're really pretty small gains, to be honest.  But it is in the right direction.

Robinson takes into account numbers that I do not base my analysis on, such as rig counts in the oil and gas fields. This is considered an important variable in the Wyoming economy, and I do not dispute that per se. However, a rig out on the prairie is only an investment; what matters is if it starts producing or not. In other words, the rig is not economically meaningful until it is online.

As a forecasting tool, though, rig counts can be important. I have found their use to be exaggerated, but if Robinson and others want to prove their worth, I will take a serious look at it.

There is one point where the rig count can be said to be relevant already now, namely when it comes to personal income. As I have explained in two earlier articles, there are really only two drivers behind jobs and personal income growth in our state. The first is increased economic activity in support functions for oil and gas extraction - increased rig activity - which is not strong, but statistically visible. This is Robinson's main point regarding growth in personal income.

There is a second driver, as I explained last week:

1. Our state's total personal income grew by 1.2 percent from the second quarter of last year to the same quarter this year; but


2. When we look more closely at where that increase came from, it turns out that it was not from work-based income;
3. In fact, wages and salaries declined by 0.5 percent, marking the ninth quarter in a row with current-price decline in wages and salaries earned in our state;
4. The component of personal income that increased the most was dividends, interest and rent, i.e., income from investments, which were up by 3.8 percent;
5. In addition, personal current transfer receipts - entitlements including but not limited to Social Security, Medicare and Medicaid - increased by 1.8 percent.

To put this in a longer perspective: since work-based income started declining, we have lost over $1 billion in wages and salaries earned in our state. The decline appears to be coming to an end, as Figure 1a explains: 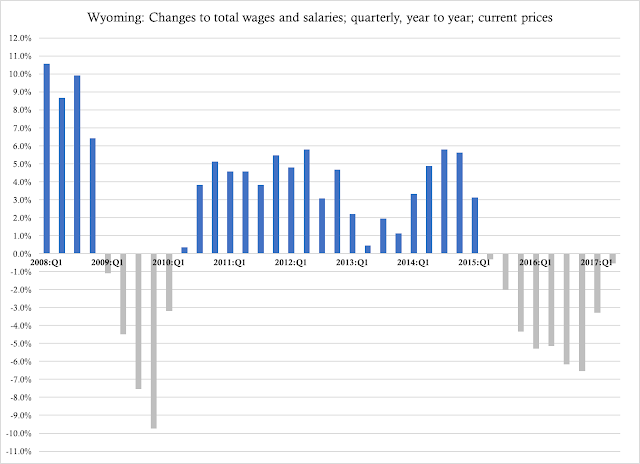 This tapering-off of the decline is consistent with other data that shows we are in a new state of a poorer "normal". It is also a sign that there is no growth whatsoever in the economic activities that provide the foundation for taxes: production and consumption. Regardless of whether we collect taxes on income, consumer spending, property or at any other point in the economy, the money paying for those taxes have to come from somewhere. That somewhere is ultimately income earned on productive activity.* Our dependency on entitlements has grown notably, but the picture is a tad more complicated than it might seem at first glance. Figure 2 explains: 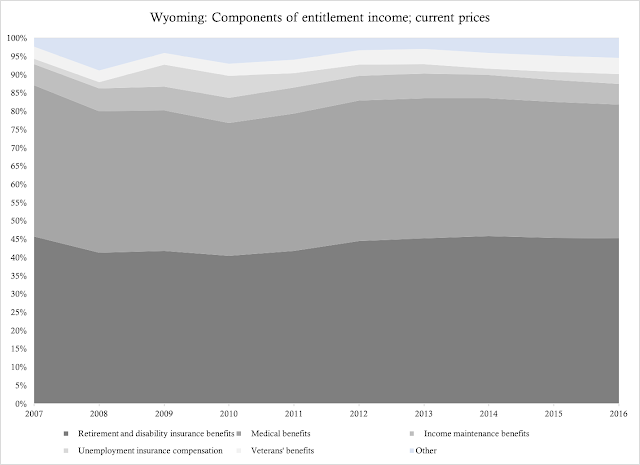 The fact that there has been growth in entitlements as share of our state's personal income total, is more a function of the decline in wages and salaries than any dramatic increase in entitlement income. That, however, does not change the point about personal income and taxes: even if the increased dependency on entitlements is ultimately caused by a decline in wage-and-salary income, that does not change the conclusion about what taxpayers in Wyoming can and cannot afford.

In terms of levels of dependency, we are still fairly low by comparison: at 13.3 percent for 2016, only North Dakota, Colorado and Connecticut have a lower dependency than we. However, with the third-fastest growing dependency on entitlements, we need to keep a close eye on where our state is heading.

And no tax hikes, please.
---
*) That is not to say production per se drives growth. The ultimate goal of economic activity is always to satisfy human needs by means of scarce resources; the process of doing so is the driver of growth. But in the context of this article, the exact definition of the economic growth drivers is of no real importance.
Posted by Sven R Larson, Ph.D., Political Economist at 9:49:00 AM