In their much-anticipated data on personal consumption, the Bureau of Economic Analysis has some sinister new numbers to report.

Not for the country as a whole - generally, the U.S. economy is still moving along at a decent pace. If Congress could get Trump's tax reform done, we might be able to extend, even accelerate our current growth.

Again, that refers to our country as a whole. As far as Wyoming goes, the latest private-consumption numbers, from 2016, are not exactly good news.
In fairness, it is important to remember that 2016 was the second year of our state's steep economic downturn, so the bad numbers were expectable. That said, they do tell us a great deal about the new state of stability we are now in.

More on that in a moment. First, here are the aggregate consumption numbers for 2016: 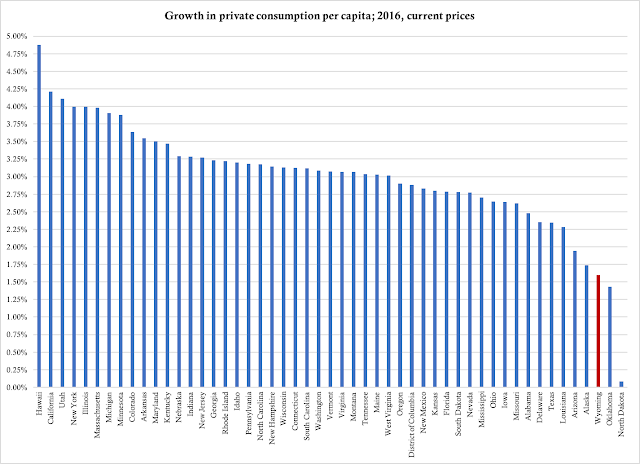 Per capita, private consumption in Wyoming grew by 1.6 percent last year. Only Oklahoma (1.4) and North Dakota (0.1) did worse. Evan Alaska managed to stay ahead of us. The national average was 3.2 percent.

Some people might suggest that this is an anomaly, related entirely to the downturn in demand for our energy products. That is true to some degree, but it is also important to note that Wyoming has been one of the worst states in growth of per-capita consumption in four of the past five years:

In other words, it is not the weak consumer spending of 2016 that is the anomaly - it is the strong growth that happened in 2014 that stands out.

The weak consumption numbers fit well together with data on personal income that I have reported on before. Given what the personal-income numbers look like in 2017, we can expect this weak trend in consumption to continue into this year.

Obviously, these numbers tell us that households in Wyoming do not have a whole lot of margin in their finances. A closer look at the data reinforces this impression, showing a trend of concentration in consumer spending toward essentials, and away from secondary items.

In more detail, purchases of cars, trucks and SUVs increased by two percent in Wyoming in 2015, while the increase was 6.1 percent in the rest of the country. In 2016, we here in Wyoming reduced our spending in this category by four percent, while the nation as a whole saw an increase by 1.2 percent.

More of the same message is conveyed by the next spending category:


Together with the four-percent drop in spending on passenger vehicles, this decline is a strong indicator of poverty in household finances.

We get yet another indicator of this trend in the data for spending on non-durable goods. We are actually slightly ahead of the country as a whole in spending money on groceries and clothes, which goes to show that families in Wyoming concentrate their spending to basics.

But wait - there is more. Consider these numbers for private, per-capita health care spending:


If you are struggling to put food on the table, keep your kids clothed, your house warm and your gas tank filled, you put off health care that is not absolutely urgent.

There are other numbers in these consumption data where we have seen a stronger increase than the rest of the country. Those, however, do not contradict the conclusion that Wyoming families are living on tight budgets. Beyond that, though, it is worth noting that the weakness of consumer spending translates into weak numbers for businesses that sell to households, from barber shops to car dealerships.

To put these numbers in perspective: if we here in Wyoming had seen the same growth in total consumer spending from 2014 through 2016 as has the rest of the country, then Wyoming families would have spent almost $1.2 billion more in 2016 than they actually did. That is $1.2 billion more on cars, appliances, recreational activities, health care, home repair and other items that quickly create jobs in our local communities.

But Wyoming families did not spend that extra $1.2 billion. They did not have those extra dollars. They had to refocus their spending to provide for basic needs.

What are they going to do if their cost of living goes up by thousands of dollars per year as a result of hundreds of millions of dollars in higher state and local taxes?
Posted by Sven R Larson, Ph.D., Political Economist at 10:18:00 AM