The Tax Foundation has released its latest issue of the State Business Tax Climate Index. This is the annual product that Governor Mead loves to quote, because it raises Wyoming to the skies as the best of all 50 states for businesses.

Over the years I have repeatedly criticized this index, pointing in particular to the fact that there is no correlation whatsoever between a state scoring high on this index, and that state's economic performance.
For the longest time the good folks over at the Tax Foundation ignored my criticism, but eventually decided to ignore me at a higher level. (I am no longer allowed to participate in their conferences...) My problems with the Tax Foundation do not stop at their Business Tax Climate Index: I had a lot to say about their unhelpful involvement in the tax reform in Kansas, and after the Foundation's economist Nicole Kaeding testified at the Revenue Committee meeting in Thermopolis in June, I have a nagging feeling that they are going to try to "help" us here in Wyoming as well.

Over the years the Tax Foundation has become more and more of a centrist, even welfare-statist outfit. Their concerns are no longer with how to promote growth and prosperity, but how to secure an efficient tax system for steady, stable and safe tax revenue. This their new mission becomes clear when we compare their tax-climate index numbers to the economic performance of the several states.

A few years ago I did a comparison of two years' worth of data. Figure 1 explains how there is absolutely no correlation whatsoever between tax-climate index scores and state GDP growth. There are 100 observations of data pairs, index score and GDP, from 50 states over two years, organized from high index score ("doing well") to low index score ("doing poorly"): 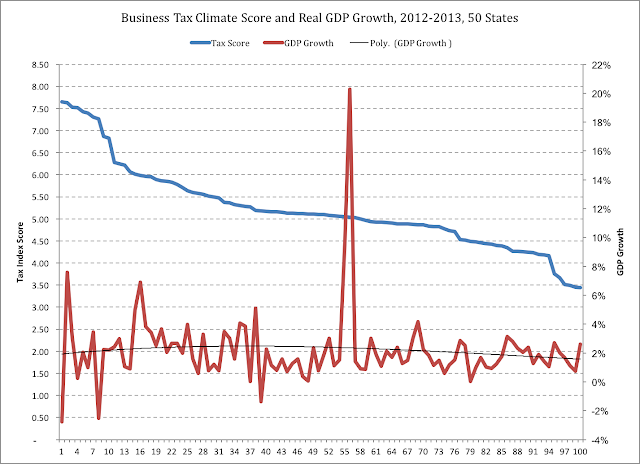 A look at the same data in 2017 is even more interesting. Figure 2 compares the latest index scores from the Foundation's new report, to annual state GDP growth for the first quarter of 2017: 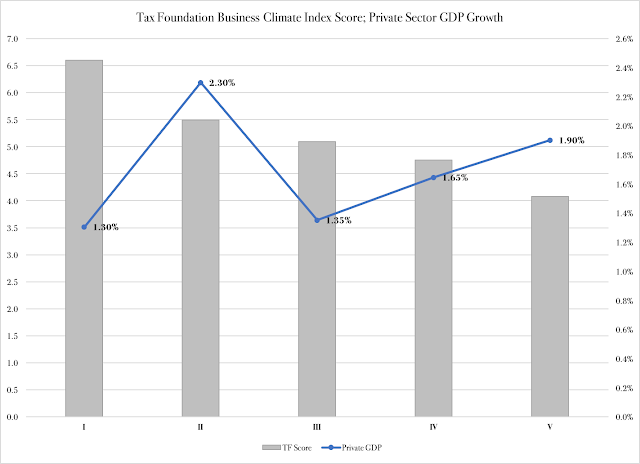 The ten states with the highest index scores - in other words, those that are supposed to be most business friendly - are grouped together under the first column. These states exhibit an average GDP growth rate of 1.3 percent. By contrast, the group of states that have the lowest index scores and should be driving businesses out the door in droves, averaged 1.9 percent in GDP growth.

There are two explanations for why the Tax Foundation's tax climate index is irrelevant in explaining economic growth. The first is that its variables are irrelevant for GDP growth, a point that the Brookings Institution tries to make. The National Conference of State Legislatures (NCSL) goes farther, suggesting that tax cuts are negative for the economy. Neither argument is valid. The Brookings report collapses into a discussion about timing in correlative analysis, and suggests that the relationship between taxes and growth shifts from negative to positive somewhere in the '90s. Yet the shift is entirely explainable by a long-term decline in growth in the U.S. economy as a whole, a phenomenon the causes of which I have analyzed at length in two books (most recently The Rise of Big Government: How Egalitarianism Conquered America).

In other words, it is not the case that taxes are irrelevant to GDP growth. If anything, the Brookings report shows how easy it is for economists to get lost in the technicalities of formal models and the pursuit of statistical rigor. The world is what it is, and no level of sophistication in statistical analysis can compensate for the shortcomings of reality.

The NCSL study departs from the premise that a dollar's worth of reduction in spending automatically cancels out a dollar's worth of tax cuts. The argument is that a spending cut reduces someone's salary and deprives the economy of the same money that is "given back" to the private sector in the form of a tax cut.

This argument is so simplistic it is almost not worth wasting time on. I will limit my criticism of it to a reference to one of the best studies ever done on the losses of economic activity as a result of big government. Admittedly, though, the spending side is even more harmful than the taxation side; this is for important reasons we can return to at a later point in time.

In other words, the argument that taxes are irrelevant to growth is in itself irrelevant.

The second argument would be that the composition of taxes - the tax structure - is more important than the tax rates themselves. The Tax Foundation itself makes this argument. One of its studies points to complexities of the tax system, but the interesting part is that their conclusions contradict the findings in their own Business Tax Climate Index. Deductions, exemptions and other measures reduce the effective tax rate, both for individuals and for corporations.

In another study the Foundation suggests that income taxes are more harmful than taxes on consumption when it comes to economic growth. Yet in their tax-climate index, states are disproportionately rewarded for not having an income tax. Wyoming scores well because we have neither a personal nor a corporate income tax - but if we follow the Foundation's own research, income taxes should be less important in their tax-climate index than sales and property taxes.

So what is the explanation to the findings in Figures 1 and 2? Sadly, the explanation is that the index itself is wrong. It weighs up income taxes in a way that it shouldn't, and it also gives each tax the same weight in each state. This latter point is especially important: each economic activity, that falls victim to a tax, is more or less prominent in a state's economy. A good example is personal income, the relative size of which can vary considerably between states. The larger personal income is relative state GDP, the more important it becomes whether or not the state taxes that income.

In the future, perhaps the Tax Foundation will shape up its index and make it a lot more realistic. That would be much welcome: each time a Wyoming governor quotes this index, while our GDP and private jobs creation ranks among the worst in the country, we the Wyomingites are nudged yet a little bit further into the shadow realm of economic stagnation and the welfare-statist economic quagmire.
---
*) National accounts nerds - like me - will point out that you cannot have personal income exceed 100 percent of GDP, because it violates the definitional structure of the national accounts system. However, that point holds so long as we disregard entitlements, of which Social Security is a big one.
Posted by Sven R Larson, Ph.D., Political Economist at 9:56:00 AM