The Trump Economy: Not in Wyoming

As I explained over the weekend, the American economy has responded well to the Trump presidency. There is an initial upswing in economic activity, especially in business investments, that could be the start of a long growth period and a return to 3+ percent GDP growth. However, in order for that to happen, Congress needs to do its fair share of working with President Trump. A lot of the business optimism has to do with Trump's vow to repeal and replace Obamacare and to overhaul business and personal income taxation. Those high, and initially well-merited expectations, will quickly come crashing down if Congress continues to behave like a greenhouse full of political vegetables.

To be blunt:
if they cannot even deliver on their eight-year-old promise to repeal and replace Obamacare, the Trump surge in the economy is going to fade and we will slide back to two-something percent growth.

That said, at least our national economy is moving forward. That is a lot more than we can say about the Wyoming economy. However, we can change that for the better, if our legislators, when they convene in Cheyenne after New Year, make wise tax-and-spending choices.

We will get back to those choices; for now, let us make a quick comparison of Wyoming to the national economy. Figure 1 portrays U.S. GDP growth and the growth in Wyoming GDP, both adjusted for inflation: 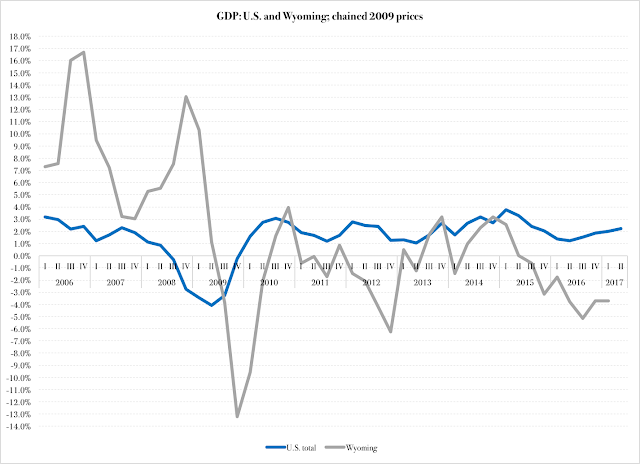 After the heydays of 10-15 years ago, we have not been able to keep up with the nation as a whole. Figure 2 demonstrates how we have lost ground compared to the national average. The assumption behind Figure 2 is that you put $100 in two different bank accounts in the fourth quarter of 2005, and then earn annual interest equal to real GDP growth for, respectively, the U.S. economy and Wyoming. The U.S. account would be on track to doubling your money, while the Wyoming account would be struggling to even keep your $100 intact: 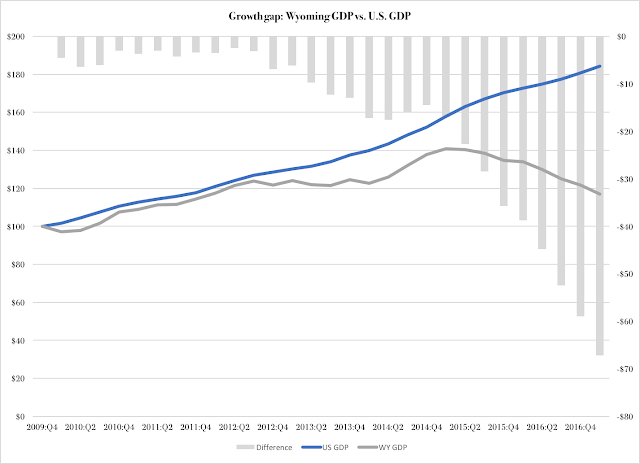 A common objection to this type of US-to-Wyoming comparison is that we rely heavily on the minerals industry, and therefore that our downturn is really just a downturn in that particular sector. While it is true that the minerals industry contributes quite a lot to our economy, its share has declined notably (in inflation-adjusted numbers):


Figure 3 isolates the non-minerals private sector of the Wyoming economy and compares its growth to that of U.S. GDP: 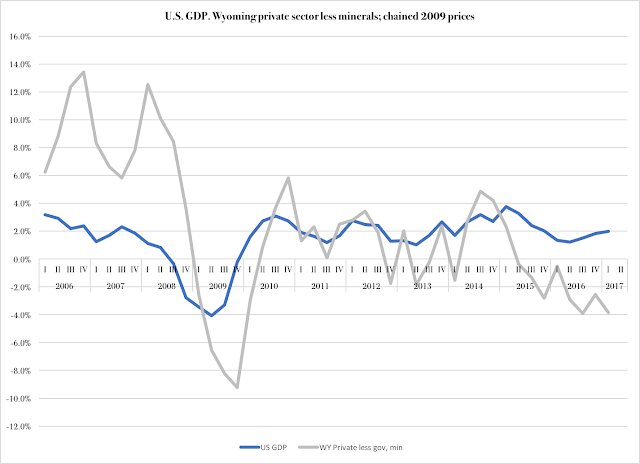 While this is a bit of an apples-to-oranges comparison (the proper procedure would be to make the exact same sectorial isolation in the U.S. economy), it nevertheless gives us an idea of the system-wide problem we have here in Wyoming. If it were true that the downturn in our minerals industry was an isolated event, the difference between the growth rate of the U.S. economy and that of our non-minerals private sector should be much smaller than in Figure 3.

Our problem is that we do not have a secondary industry to carry the torch when the minerals industry is slumping. Government, our current secondary industry, is not suitable for that role. But more important from a short-term perspective is the problem that we may face serious increases in taxes in the next year or two:

--The Joint Revenue Committee is pursuing up to $300 million in "new revenue";
--To actually close the budget gap - in a static, fantasy economy where new taxes do not depress economic activity - the Revenue Committee would have to look for an additional $100 million;
--Add to that the brilliant, new idea of a state-run airline that will add a net cost of $100 million to the state budget;

and we are looking at tax increases potentially in the half-billion dollar range between now and 2019. And that is not counting local tax hikes.

To match this tax hike, Congress would have to impose some $238 billion in new taxes on the U.S. economy. That is not going to happen until Democrats control both the legislative and executive branches, but it gives us an idea of just how dangerous the current tax-and-spend policies are here in Wyoming.

Imagine instead that we had a governor and a legislature that were all solid fiscal conservatives. Imagine that they decided to execute the right kind of reform in each and every big spending program, from K-12 education through Medicaid to highways... How would that turn our state around for the better?

The answer to that question is in tomorrow's article. Stay tuned.
Posted by Sven R Larson, Ph.D., Political Economist at 9:40:00 AM