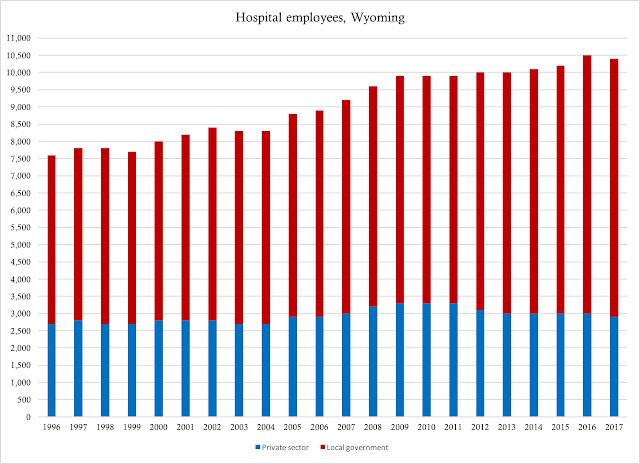 The message in these numbers is that we may be on a path to socialization of health care production here in Wyoming; it is a big suggestion to make, for sure, and I am in no way certain that this is what is really happening. However, as I also explained in my June article, we appear to have a considerably larger share of hospital resources in government hands than other states. The relevant datasets are incomplete, so all I could report back then was a tendency.

Today I can add some more numbers that confirm my worries. Before we get to the numbers, though, let me explain why this is such an important issue. After the Bush administration's highly irresponsible Medicare expansion, and the mess we know as Obamacare, we are closer to a socialization of health care funding here in America than we have been since the failure of Hillarycare.

Thanks to Republican political inertia in general, and in particular to John the Statist and Murky Lisa, Obamacare will continue to live and slowly destroy what is left of private health insurance. The window is now closing fast for Republicans to get even a token reform passed; as I explained a week ago, the Graham-Cassidy "bill" was just a show-and-tell effort to make voters believe that Republicans in Congress actually want to do something about Obamacare.

With this national background in mind, it is easy to see where we are heading here in Wyoming. Since the future of private health insurance is looking increasingly dim, the only way we can preserve some private control over our future health is by preserving private delivery of health care. So long as we have private-practice doctors, private health clinics and private hospitals, we will still have a window to buy high-quality health care when we need it. (Only an outright ban on private payments could eradicate the private sector altogether.)

For this reason, it is critical that we do what we can here in Wyoming to secure the private delivery of all kinds of health care, from general practices to highly specialized forms of medicine.

It is therefore worrisome to see that, in addition to the continuous relative decline in private hospital employment, private hospitals seem to be shrinking in size, while government-run hospitals are increasing: 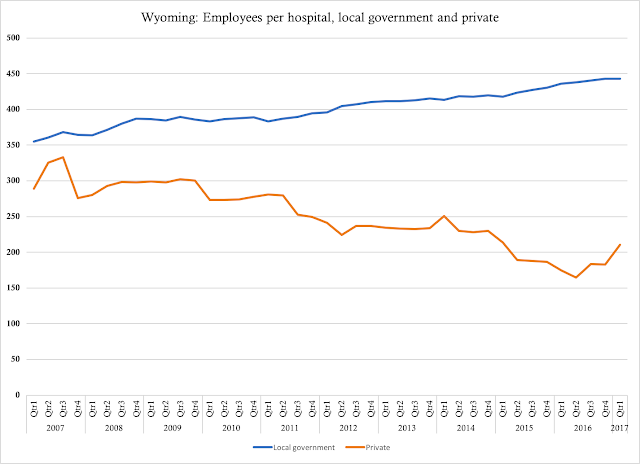 There are a lot more factors that determine the actual capacity of a hospital, but the number of employees is a first indicator of whether we are talking about full-service hospitals or specialized institutions. If the tendency in Figure 2 is what it appears to be, then we are looking at a gradual marginalization of private hospital-based health care here in Wyoming. Ostensibly, this means that bulk health care is taken over by government and private health care is restricted to the provision of specialized delivery.

So not only are government hospitals getting bigger, but their costs seem to be rising faster than parity with their expansion.

More information is needed to verify this trend, but what we have seen so far is troubling enough. There is plenty of research to show that government-delivered health care is less efficient and more costly than privately delivered care. The current trend suggests that we, as a state, are walking backwards into the future.
Posted by Sven R Larson, Ph.D., Political Economist at 10:22:00 AM