The Eclipse of the Welfare State

While lots of out-of-staters clog up our highways to see the solar eclipse, an entirely different kind of eclipse is slowly making its way across America. Unlike the solar one, this eclipse is not for us to ignore. It is an eclipse that affects the entire country, but it is even more important here in Wyoming than in any other state.

It is the eclipse of the welfare state.

Before we look at the details of this increasingly ominous shadow over our country, let me quickly recap what macroeconomic situation Wyoming finds itself in today.

Our state's GDP has the worst growth record in the nation, and despite the arrival of a "new normal" state of stability in the Wyoming economy, the most recent data shows 15 industries in decline. To make matters even worse, for every 100 jobs lost in our state, 275 residents leave. Not only does this mean that families are leaving, but - demographically speaking - one family leaves for every job lost. This is hardly a vote of confidence in our state; the prospect of finding a new job here in Wyoming is so dim that people prefer pack up their families and leave.

All this has a depressing effect on state and local tax revenue. To top off the problematic situation, we also have a serious entitlement problem that is likely going to get worse. During a trip to Washington last week for meetings with "political insiders" and other in-the-know contacts, I was told that we should expect three entitlement programs to advance in the next few years - unless the Republicans in Congress suddenly wake up one day and embrace fiscal conservatism.

Those three entitlement programs are:

These three would complete the transformation of the United States into a Scandinavian welfare state. The consequences of this transformation would not be limited to a permanent macroeconomic downshift as we sink into industrial poverty and permanent economic stagnation, but it would also have profound cultural and moral consequences. A recent Wall Street Journal op-ed by an American living in Sweden describes well what this transformation means in reality.
While we Wyomingites are better equipped, morally and culturally, to withstand the statist onslaught, we are not immune. The path to the destruction of a culture runs through tax-paid entitlements, and once the welfare state is complete, not even we here in Wyoming will be able to shield ourselves from its transformative force. On the contrary, because of our state's bad economic shape, we are a lot more vulnerable than we would like to think we are.

There are some important economic data to back up this analysis, the essence of which is captured in this figure: 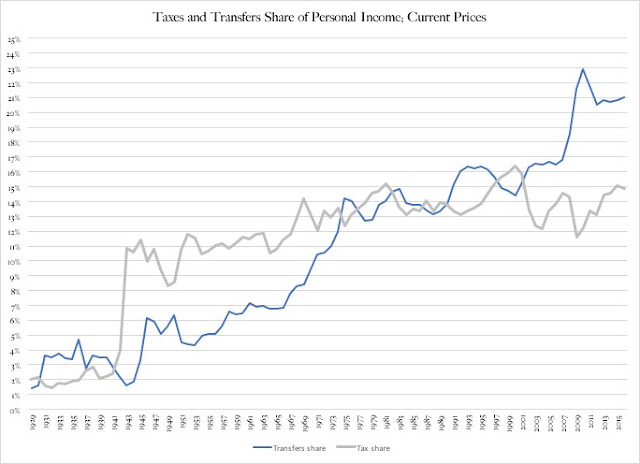 Figure 1 reports the percentage of total personal income in the United States that consists of transfers from government. The blue line shows how this percentage has grown steadily over time, but how it has taken three leaps: first after World War II when Social Security went into effect; secondly when the War on Poverty began in 1964; and third when the Obama administration opened the faucets for Medicaid expansion, food stamps and other entitlement programs during the Great Recession.

The grey function reports the share of our personal income that we pay out in income taxes. Before the War on Poverty, Americans paid in more of their personal income in taxes than they got back in the form of transfers from government. This indicates that the federal government was primarily preoccupied with something else than to redistribute income - we still had a conservative welfare state, so to speak. With the War on Poverty, however, things changed: as the entitlement programs created or reformed under President Johnson (and the Earned Income Tax Credit came about under the Nixon and Ford administrations) American families, in total, began getting as much back from government as they paid in.

Superficially, this sounds like a good idea. After all, if we pay taxes, should we not also get something back in proportion to what we pay in?

The problem with the entitlements that government doles out is that they are redistributive in nature: people with high incomes pay, and people with low incomes get. The more redistribution government offers, the more it will discourage productive economic activity. Entitlements trap people in low-income jobs, or discourage them from working at all. At the same time, high taxes on higher incomes discourage people from pursuing high-paying jobs or starting and growing their businesses.

As more people get trapped in low-to-moderate paying jobs, the tax base falls short of what the welfare state needs. Economic growth slows down - we have not seen four-percent growth since the 1990s and we should not expect any sustained periods of three-percent growth for the foreseeable future - which inevitably leads to stagnation of personal incomes. Earnings from workforce participation no longer provide the same reward that they used to.

Figure 2 explains how the composition of personal income in the United States has changed over time. 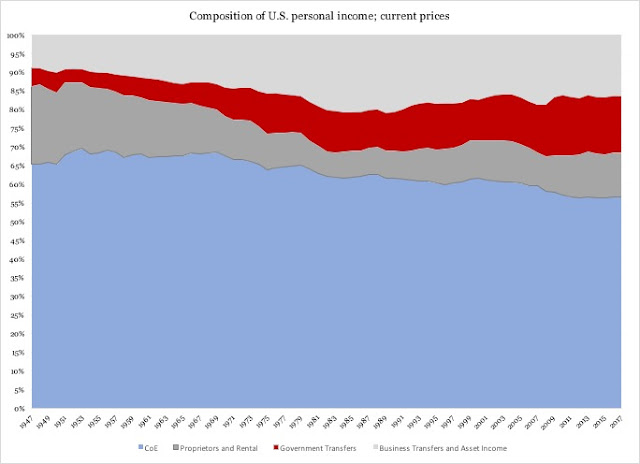 As recently as in the 1970s, compensation of employees (in other words, your paycheck and your benefits) provided a bit more than 70 cents of every dollar Americans made. Business transfers and asset income, i.e., private pensions and investment earnings, provided 15 cents per dollar earned, while income from property - rentals and other proprietors' income - was third, with approximately eleven cents.

Government transfers, a.k.a., entitlements, was the smallest of the four major categories. That gradually changed in the following decades: by the end of the 1990s strong growth period, entitlements had passed proprietary income and become the number-three provider for America's families.

In 2017, the composition has changed even further:

In other words, government-provided entitlements are on the cusp of becoming the second-largest income source for America's families. With single-payer health care and paid family leave it is a given that government will handily become our number-two income provider (not counting the actual government workforce). I would not go as far as to predict that these two programs will push employee compensation below 50 percent, but we are definitely on a trend in that direction.

Are we going to let our nation sink to that level?

The answer to that question begins at the local political level. We can change the role of government here in Wyoming - there are actionable reforms at hand - and accomplish two things: a structural reduction in the size of government expands the room for private businesses to grow; and we set an example for the rest of the country.

These two accomplishments are equally important. Economic success from a roll-back of the welfare state is a compelling example in itself; showing that it can be done politically and legislatively is as much of an encouragement to others as economic success. But there is another side to this: we have no reason to expect help from anywhere else in our efforts at reforming government. It is especially futile to expect any help from Washington. As Figure 3 explains, Republicans and Democrats are equally good at expanding and preserving the welfare state: 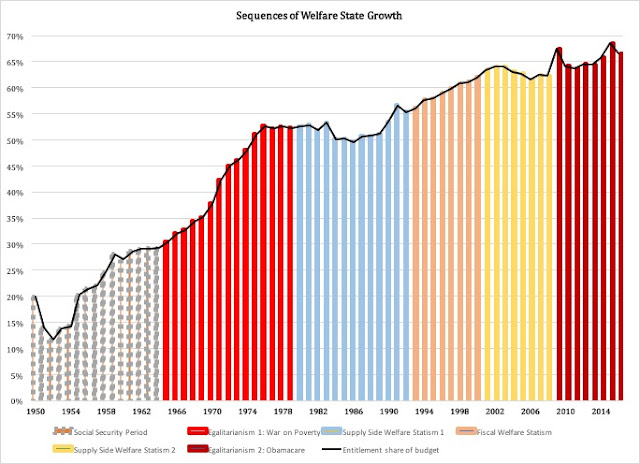 Without going too deep into the details (I am working on a paper that will do just that) since World War II the American welfare state has gone through six different periods:

1. The Social Security period. This is when the "crown jewel" of the Franklin Roosevelt presidency went into full effect. From 1950 through 1990 Congress raised the Social Security tax 20 times to keep up with spending (and still, the program is destined for bankruptcy...). During this period, other entitlement programs were provided under the absolute-poverty definition that defines conservative welfare states. There was no redistributive ambition behind them.

2. Egalitarianism 1: The War on Poverty. I am not going to elaborate on this period; my upcoming book The Rise of Big Government: How Egalitarianism Conquered America tells the story in great detail (and also traces the ideological roots of the War on Poverty to some rather ugly radical socialists and eugenicists in Sweden).

3. Supply Side Welfare Statism 1. By the late 1970s the American egalitarian welfare state started showing its first signs of structural ailment. To reinvigorate the tax base, President Reagan got Congress to agree to a major overhaul of the federal tax code. On the spending side, however, things went on just as normal, with 6+ percent annual growth in entitlement spending. In other words, the supply-side economics of the Reagan era was a method to strengthen the tax base for the welfare state, not to take America off the egalitarian track.

4. Fiscal Welfare Statism. This is the period when President Clinton and Republicans in the House worked together to close the federal budget gap. Benefiting from a combination of the tech revolution and the Reagan era tax cuts, they were swimming in revenue and could easily have reduced the size of government. While spending grew modestly compared to the Reagan years, they did no such structural reforms. Instead, they concentrated on balancing the budget, which they were able to do for four years straight. Fiscal responsibility in a welfare state.

5. Supply Side Welfare Statism 2. During and after the Millennium recession, the big welfare state that Clinton inherited, nurtured and even amended to, once again suffered from fiscal shortfalls. The Bush Jr. administration responded with the same type of "reinvigoration" of the tax base that Art Laffer convinced Reagan to apply. The macroeconomic results were not as dramatic as back in the Reagan years, but thanks in part to the Clinton-Gingrich-Kasich efforts at fiscal welfare statism, the budget gap was manageable. Had it not been for the Great Recession, the federal budget would have been in surplus in 2009. That said, Bush Jr. allowed entitlement spending to grow at Reagan-era levels and made the huge mistake of leaving our health insurance system unreformed.

6. Egalitarianism 2: Obamacare. He really had much more radical plans, but Obama was stifled by a combination of his own over-estimation of himself, and the Tea Party movement. After Obamacare he could not do much more on the entitlements front. That, combined with his unwillingness to work out budget deals with the GOP ironically brought the growth rate in federal spending down to levels comparable to, or even lower than, the Clinton era. That was not, however, the result of some ideological skepticism about the welfare state; part of it was due to cuts in defense spending, part of it the work of continuing budget resolutions. But had Obama been working with a Democrat Congressional majority, the American welfare state would already have been completed.

The bottom line from these six periods of the American welfare state is that Republicans and Democrats collaborate in various constellations to grow, nurture and administer the welfare state. It remains to be seen where the Trump presidency falls in the context of this historic overview; it is probably a good guess that it will turn out to be the third leg of Supply Side Welfare Statism. That depends, though, on how interested Congressional Republicans are in cutting taxes; if they leave taxes unchanged and instead go for paid family leave, they will essentially extend the Obama era's slow-moving egalitarian expansion.

If that happens, we in Wyoming have nowhere else to go but to rely on ourselves. The need for fiscal conservatism, limited government and economic freedom will grow even stronger.

A lot will ride on what we decide to do over the next six months, politically and legislatively.
Posted by Sven R Larson, Ph.D., Political Economist at 11:27:00 AM