Jobs and Wages in New-Normal Wyoming

Since the spring, I have pointed to weak but consistent signs of an end to our state's serious economic downturn. An update of employment and earnings data, reported below, confirms the transition from a downturn to a new macroeconomic normal.

Before I get to the data, let me - as always when I mention this new normal - explain that the end to the downturn is in no way a reason to assume a return to high levels of macroeconomic activity. The best forecast is that this new normal will establish itself over the next year.

If anything changes for the better, it is either because of a substantial rise in growth in the U.S. economy (it is unrealistic to expect any economic pull from the rest of the world) or a revolution of economic freedom here in Wyoming. If it changes for the worse, it is most likely going to be as a result of the hundreds of millions of dollars in new taxes that the Revenue Committee is considering.

To reinforce my point about the new normal, let us review some recent earnings and employment data from the Bureau of Labor Statistics. These are monthly data, released with a 1-2 month lag by the BLS. The charts are a bit dense, information-wise, so please take a little bit of time to study them. Here is the information in them:

a) the data reported is monthly, but represents the change in the variables - average weekly earnings and employment - over the same month a year earlier;
b) the two main categories, average weekly earnings (blue functions) and employment (green), are both reported for the entire private sector in Wyoming, and then for a few select industries (which are good business-cycle indicators); this information is reported by the "shadowy" lines in each chart;
c) a trend line for each category, represented by a thick dashed function; this trend line helps point to the long-term movement in each variable, but is not necessarily a good predictor of where things are moving in the near future;
d) a straight, dashed line representing the most recent value of each variable; for example, in Figure 1 the blue, straight dashed line represents the average weekly pay in the total private sector in the Wyoming economy; that average weekly pay was $835.18. 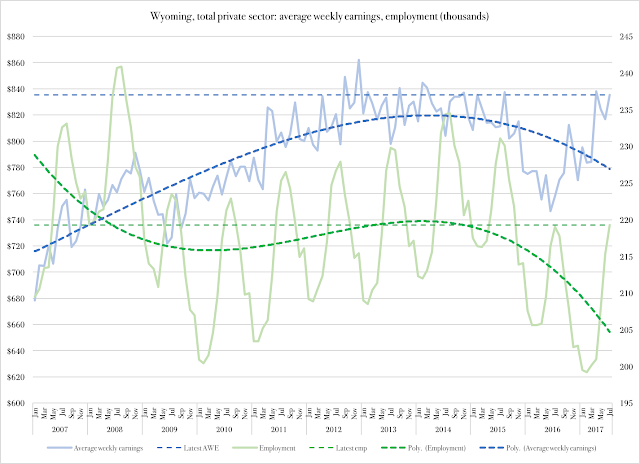 On the one hand, Figure 1 explains, we have seen a solid rise in average private-sector earnings since last summer. On the other hand, that strong increase is only a return to where average weekly earnings were in 2012-2015. The rise over the past year is, in turn, not yet strong enough to represent a new direction - only a stabilization - of workers' earnings.

Employment figures reinforce the weakness of this new normal. Current private-sector employment is barely comparable to average numbers for the past ten years.

Looking at minerals, the situation is - predictably - much worse. But as Figure 2 also demonstrates, it is far too premature to talk about anything except a stabilization of the situation in that industry: 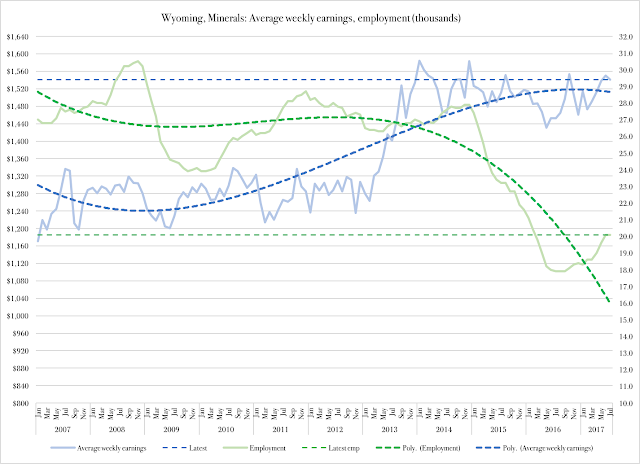 Here are the same numbers for the construction industry... 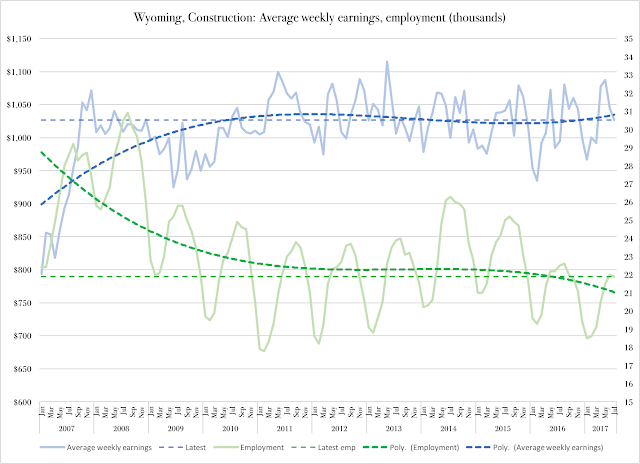 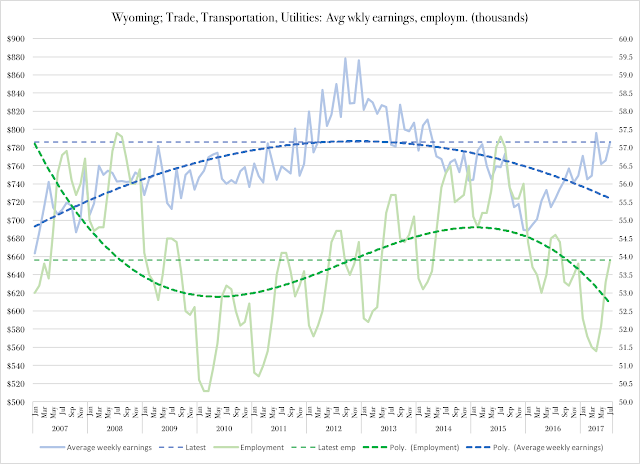 ...and professional and business services, which include engineering consulting: 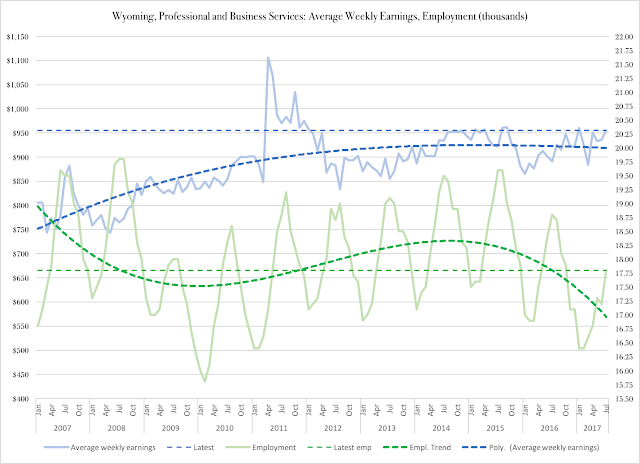 Lastly, here is the private sector without minerals - an often overlooked metric on how our economy is doing: 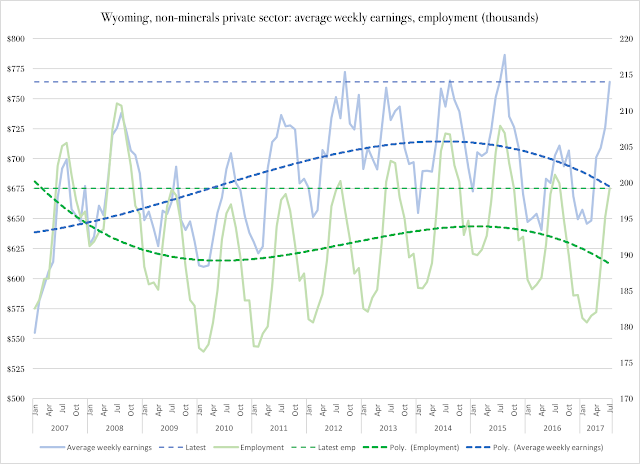 The only consistent picture from these charts is that our state's economy is weak and frail, and certainly not able to carry a major increase in taxes. For sure, we have emerged from a steep downturn, but the new normal we are entering will by no means offer a life of milk and honey. On top of the long-term weakness in the non-minerals private sector - a job there pays $37,000 per year on average - there is a broader trend in our national economy that must inform any forecast of where our state is heading. Explains CBS News, reporting on a study by CareerBuilder.com:

Almost 8 out of 10 American workers say they live paycheck to paycheck to make ends meet, according to a new survey from CareerBuilder. That can force people to take on debt or otherwise struggle when an unexpected bill arises. It also raises questions about the stability of the broader economy given that consumer spending accounts for more than two-thirds of activity. The survey highlights a troubling trend in household finances: More than eight years since the end of the recession, the share of Americans who are living on the financial edge is growing, said Mike Erwin, a spokesman for CareerBuilder. While some may want to blame Americans' spendthrift ways, Erwin pointed to two trends that continue to put financial stress on households: stagnant wages and the rising cost of everything from education to many consumer goods. "Living paycheck to paycheck is the new way of life for U.S. workers," he said. "It's not just one salary range. It's pretty much across the board, and it's trending in the wrong direction." A year ago, about 75 percent of U.S. workers said they were living from payday to payday, a number that has grown to 78 percent this year.

With the worst performing economy in the country, it is a safe bet that Wyoming has a higher share of paycheck-to-paycheck households than most states. That is not a good economic environment for tax hikes.

It is, however, a great place to implement long-term, structural and free-market friendly reforms of government spending.
Posted by Sven R Larson, Ph.D., Political Economist at 5:11:00 PM