Obamacare Wins: Here Is What's Next

I took my wife to breakfast at Perkins this morning. They have hashbrowns worth starving for.

I also took the opportunity to honor John the Statist, the big government proselytizer from Arizona, whose relentless commitment to egalitarianism has now ruined sensible, meaningful and workable Obamacare reform.
To commemorate his unwavering opposition to the free market, limited government and the very values he himself fought and suffered for, I ordered my breakfast eggs Left Side Up: 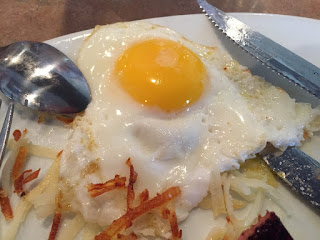 Now, to be a bit serious about the Obamacare reform failure, I have to admit that I am not very surprised. Congress has never repealed a single entitlement program without replacing it with one of at least the same magnitude and the same egalitarian profile. The very problem with the welfare state - and this is a problem that Americans in general, sadly, do not seem to understand - is that once you let it in through the door, it is almost impossible to get rid of.

It is always easier for an incumbent legislator to defend big-government status quo than it is to engage in reforms to roll back that big government. Yet there are many people out there who are still willing to give it a try, and to put in what is necessary to turn us away from the path to Europeanization.

We are going to need each other even more in the future. After Obamacare reform failure, the next two important items on the Congressional agenda are tax reform and paid family leave. The latter is, as I have explained earlier, a new entitlement program where government will pay you a share of your income for being home with a newborn, a sick child or to care for your own health or that of another family member.

Unfortunately, practically every conservative and libertarian think tank in the country has decided to either ignore or - far worse - endorse paid family leave. As a result, this entitlement program, which could become as costly to the federal government as Social Security, is moving forward toward Congressional approval - and presidential signature.

If Congress passes paid family leave before tax reform, we can all forget tax reform for the next 20 years (unless, of course, it is to raise taxes).

This entitlement program is fiscally, socially and economically dangerous. In an effort to raise an opposing voice, I am hereby publishing my first paper on paid family leave (others are on their way out):