I hear from legislators that my blog is inspiring voters and taxpayers to voice their concerns about our state's future. I also hear that people are being inspired to run for office, thanks in part to my work. Those stories are heart-warming - thank you! - but they also prove that there is only one way for the truth to win: with superior analysis, we will always win the argument; with active voters and taxpayers, nobody can escape our arguments.

One man who has realized that he cannot escape the truth is Senator Peterson, R-Crowley. As co-chairman of the Revenue Committee, he is one of the most influential legislators we have. To my delight, he recently came out in favor of spending cuts. Apparently, the message from voters and taxpayers has convinced him to think twice about raising taxes.

His specific words were close to those I used to wrap up my testimony before the Revenue Committee in Saratoga this past spring. Reports the Powell Tribune:

If lawmakers are going to support any new taxes to meet Wyoming’s estimated $400 million annual funding deficit for K-12 education, they want to see some budget cuts. “It’s a hard sell as it is,” Sen. Ray Peterson, R-Cowley, said of tax proposals that have been tossed around. “It will be an even harder sell if the schools and the education committee and recalibration committee come forward with no reductions. Because the citizens will say — I promise you — the citizens will say, ‘Then forget your tax increase.’” Peterson gave a presentation on state education funding during a meeting in Powell earlier this month. Reps. David Northrup and Dan Laursen, both R-Powell, also spoke about the education funding shortfall. Laursen said he thinks school districts should trim budgets “close to what the rest of state agencies cut.” “We’ve got to get the cuts,” he said, adding he shared other legislators’ worry that taxes could increase without ever seeing reductions to education.

To be clear, I have never argued for tax hikes. My exact message to the Revenue Committee was that we can talk about the structure of our tax system and its future, but not until we have seen some substantial, permanent cuts in state spending.

Nevertheless, Senator Peterson's words are encouraging. In just one year, fiscal conservatism has risen from a legislative punchline to being a serious contender for the attention of the legislative leadership. It is still far from certain that the next legislative session will refrain from tax increases, but with statements such as those from Senator Peterson, and from Rep. Laursen, the threshold for tax hikes has grown much higher.

Hard work and dedication to truth and good analysis always pay off. And endurance, persistence and perseverance.

Speaking of which, here is yet another reason to reduce the size of government here in Wyoming. The latest state economic growth numbers were published yesterday. They tell us how the economies of the several states performed in the first quarter of 2017.

Unfortunately, there is nothing but bad news here. Wyoming is once again at the very bottom. We had the worst annual, inflation-adjusted GDP growth, and the worst private-sector growth of all states.

In fact, it was not even growth. Here are the tables - first total state GDP:


For the past two years, Wyoming has been one of the four slowest-growing states. In the first quarter of this year, we fell to 50th (or 51st if we include the District of Columbia). Our GDP declined more than twice as much as Alaska, the second-worst off state. North Dakota, which has been behind us for almost two years, is now growing away from us.

Things look no better when we isolate the private sector:


Here is the private-sector growth record for Wyoming over the past ten years, compared to the national economy and to Alaska, the state whose downslope we have been following faithfully: 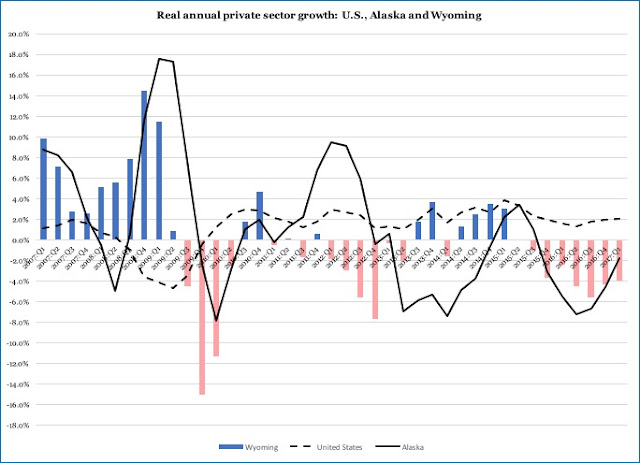 As I have reported earlier, we have actually fared worse than Alaska for quite some time, at least when it comes to jobs creation. If we cannot even stay ahead of the heavily oil-dependent, remotely located Last Frontier state, then how can we expect to continue to afford the big government we have?

This question is actually pertinent when it comes to our latest growth numbers. Figure 2 compares private-sector growth and growth in government spending here in Wyoming. Over the past ten years, government has outgrown the private sector in 24 out of 40 quarters: 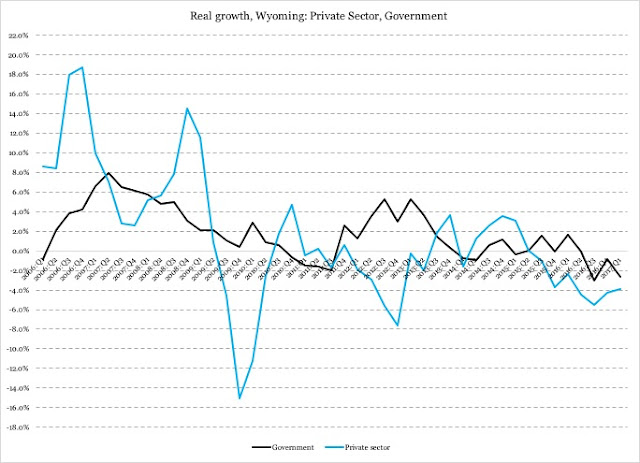 With these numbers in mind, it is, again, encouraging to hear Senator Peterson call for spending cuts before there is any serious talk about tax hikes. Assuming that the Powell Tribune is correct in its reporting on what he said, the good senator has not yet come around completely to oppose higher taxes, but he is on the right path. Hopefully, he can convince the rest of the Revenue Committee to hold off on any tax discussions until the legislature has:

a) done a comprehensive efficiency study and begun implementing its recommendations; and
b) passed meaningful, structural reforms to, at the very least, education and health-care spending.

I will be at the Revenue Committee meeting in Thermopolis next Wednesday and Thursday. I will not be testifying, but I will be available for conversations with anyone and everyone who wants to talk about our state's future.
Posted by Sven R Larson, Ph.D., Political Economist at 10:14:00 AM