The United States remains one of a very small number of developed nations that still has not created a single-payer health care system. We should be very happy that we do not have to live under the unending problems that are associated with a government health care monopoly. The problem is that if the Democrats can have it their way one more time, we will get a single-payer system.

Not only would that decimate our health care system to an archipelago of budget-restrained medical facilities providing mediocre care at phenomenal waiting lists, but it would also create the largest government bureaucracy the world has ever known. Imagine one federal agency with a budget of $2 trillion ($2,000,000,000,000) per year.

For Wyoming, a single-payer system would mean the disappearance of every full-service hospital outside of Cheyenne, and possibly one more location.
It would mean that you would have to travel four, five, six hours one way to see specialists. There would probably not be more than five or six ERs around the state. with three of them located along the I-80. Why? Because the rest would not be cost efficient enough to qualify under a single-payer system's cost-containment mandates.

The repercussions of a single-payer system would reach far beyond just degrading our health care system per se. Half of the world's pharmaceutical patents, and a very large part of other medical patents, are filed here in the United States. Why? Because we have a health care system that can absorb the costs of being the first to provide those new products to patients. If we created a single-payer system, our health care would be delivered first and foremost on a cost-containment basis (with patients being selected for care based on so called QALY calculations). The easiest way to keep costs down in a health care system is to deny access to cutting-edge medical procedures and pharmaceutical products.

For every month that Congressional Republicans drag their feet on repealing and replacing - or at least reforming - the Affordable Care Act, we take one small step closer to a single-payer system. As soon as Democrats have a majority in Congress, and as soon as they have an Elizabeth Warren in the White House, they will create a single-payer system. It is an ideological wet dream for progressives, liberals, social democrats and every other believer in social engineering.

But we don't have to wait until the single-payer system is upon us to experience the disaster it will bring. We are already experiencing a small appetizer in the form of the ACA's implosion. Take a look at these two maps from the Kaiser Family Foundation, the first of which shows insurance coverage through the ACA exchanges in 2014: 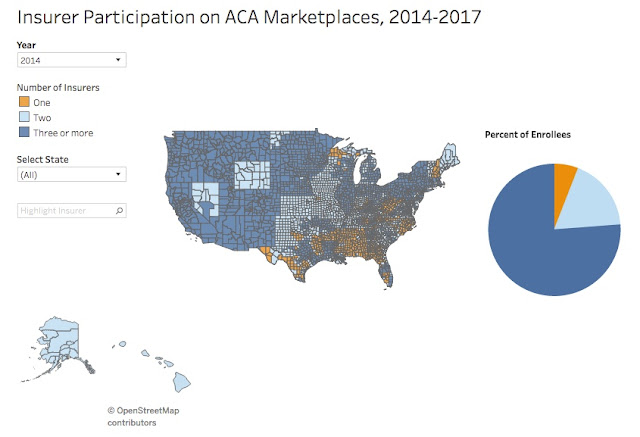 Now compare this map to the insurance coverage through ACA exchanges in 2017: 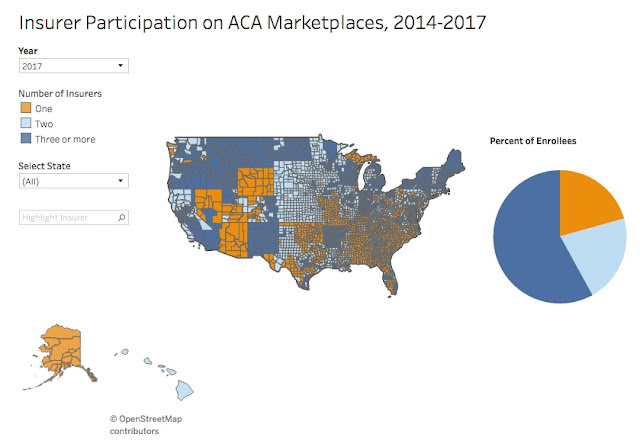 While things have gotten a little bit better in New England, the country west of the Mississippi River has suffered significant deterioration in insurance provision. As a result, the cost of health care has gone up even more than it otherwise would have. For example, a family of four in Riverton, making less than $70,000 per year, can have a ridiculously low premium of less than $400 per year, but be on the hook for $9,000 in individual annual out-of-pocket costs.

Needless to say, this is a system that is doomed to fail by design (though not necessarily by intent - the Obamacare architects most likely thought they knew what they were doing) and when it collapses, we will have a no-man's-land insurance market. That market will be ripe and ready for a socialization bill.

With Congressional Republicans exceptionally unable to move the needle on Obamacare reform, one has to wonder if they secretly wish that someone would step forward and create a single-payer system so the issue would just go away.

I hope not. We are already drifting toward a single-payer system here in Wyoming. We are seeing the very first signs of what that system would bring to our great state.

We can still save our health insurance market - or, more accurately, restore it - but in order to do so we desperately need Congress to at least reform the ACA. Even if they do not manage to do more than open a national insurance market, that would still mean a great deal for states like ours.

That is the good news. The bad news is that once we have a single-payer system it is almost impossible to dismantle it and revert back to a market-based system.

It is time for the Republicans in Congress to grow up and do what they have been promising since 2010, namely to restore a reasonably well working private health care system. We are not even asking for a good system, just one where all people and all physicians have a fighting chance to get health care, provide health care - and both walk away from the transaction with something gained.