The Bureau of Labor Statistics has released its latest set of employment data. Here are the updates for Wyoming, through the month of May.

Figure 1 reports private-sector employment numbers from January 2014 through May 2017: 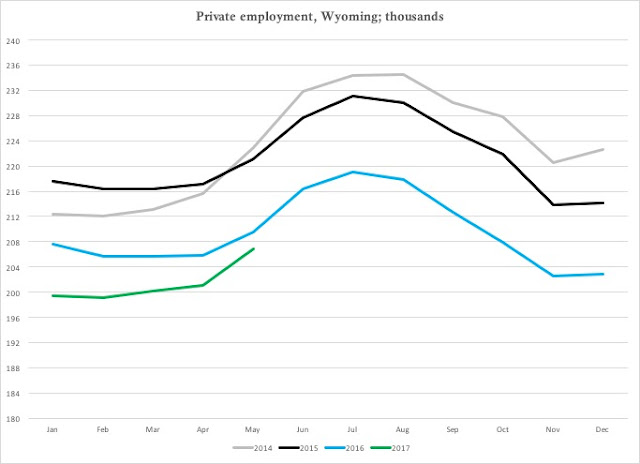 As I have mentioned earlier, key data suggests that during 2017, our state's economy will stabilize in a "new normal". The shrinking gap between 2016 (blue) and green (2017) is yet more evidence of this.

To confirm this observation, here are the changes in private employment, in percent year over year, by month over the past four years:


It is quite possible that May is the last month of this long streak of decline. In fact, the decline has already ended in the goods-producing industry, which with its 49,500 employees is responsible for 24 percent of all private-sector employment in Wyoming.

No employment review can take place without a careful look at mining. For the industry as a whole, May marks the first month since January 2015 with an increase in employment. The mining industry had 1,400 more employees in May 2017 than in May a year before.

Unfortunately, these new jobs did not show up in coal mines. May marked the 19th consecutive month with year-to-year decline in  coal mine employment (down by 300, or 5.2 percent). It was not oil and gas extraction either, where May marked the 27th straight month of job losses.

No, the mining industry added jobs in support functions, primarily in support for oil and gas activities, where 1,400 of the 1,900 new support-function jobs materialized. This was the third straight month with increased employment in this mining sub-sector.

As for the rest of the private sector:

The one industry that has been adding jobs consistently is health care and social assistance. However, as of May 2017 that trend was interrupted. For the second month in a row, this industry saw a decline in employment. It is very small, 0.4 percent, but given that providers of health care and social assistance created 1,000 new jobs from 2013 to 2016, this plateauing (too early to call it a decline trend) is worth noticing.

There is a peculiar trend in hospital employment, where private hospitals are losing jobs while government hospitals are moving in the other direction. With approximately 75 percent of all hospital employees in Wyoming working for government, this is a trend that we need to examine in more detail. It will be on the list for next week.

Another industry that merits a special mention is hospitality and food services. This industry, which members of the legislative Joint Revenue Committee are hoping to burden with new taxes, has now reduced employment for 18 consecutive months. Even during last summer, employment was down for the first time since 2009, and - again - that trend persists.

I do not like to point out the obvious, but perhaps it is not a good idea to slam new taxes on top of the cost pile for businesses that cannot even afford to keep their current payrolls intact?

As for government, let us return to their employment numbers on Monday. There are a few things to say about them that require elaboration.