The Fiscal Erosion of Federalism, Part 4


This the final installment in the series on the fiscal erosion of federalism takes a look at school funding and its relationship to public school performance. The funding data is from a comprehensive Census Bureau report on federal, state and local government money in K-12 education; school performance is measured by eighth-grade performance assessment scores from the National Assessment of Educational Progress.* Funding data is from 2014 while performance data is from 2015; the one year lag allows the funding to take effect, so to speak, in the education system.

The premise is that localized school funding is better than having states (and especially the federal government) pay for schools. Local funding is the better choice when it comes to government accountability; the question is if it is also better for school performance. If schools in states with more localized funding perform better, it is yet another argument for transferring school funding from the state level down to school districts.

Let us start with Figure 1, which reports state data on the percentage of school funding that is locally sourced, and the aforementioned assessment scores. 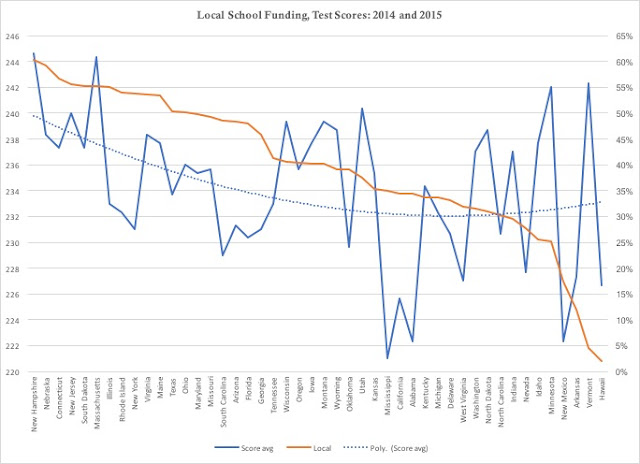 Secondly, at the right-hand end of Figure 1, not only are scores on average lower but they are also more volatile. This suggests that while localized funding appears to help schools score well, it is not impossible for schools to do well when the share of local funding is lower. It is, however, clearly more difficult.

There is some common sense in this point. The higher up we move school funding, the higher up we also move legislative decisions on how to run schools. It is clearly more difficult for a state to tailor school funding to the specific needs of every school district, than it is for the district itself. For example, some districts may need a lot of non-instructional staff to help students perform well, while other districts can do perfectly well with a minimal set of administration and support functions. At the state level, any legislation on school operations will by necessity be less flexible.

Figure 2 looks at the same data as Figure 1, but clustered and reported as averages for each quintile:* 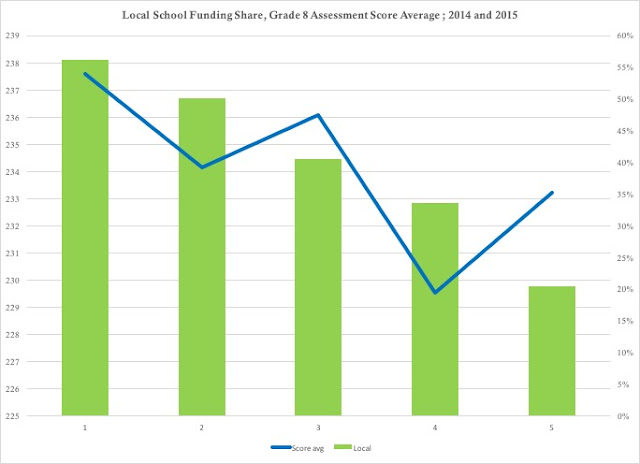 The correlation that we saw signs of in Figure 1 is more clearly visible here: schools benefit from a funding model that relies primarily on local funding.

One last question: now that we have made a school-performance case for localized funding, what about funding itself? We often hear that more money to schools is the way to make students perform better. If we are going to transfer the responsibility for school funding to local governments, what should we do about the per-student level of money going into the schools?

Figure 3 takes a look at per-student funding and assessment scores, dividing states by the same kind of quintiles as in Figure 2: 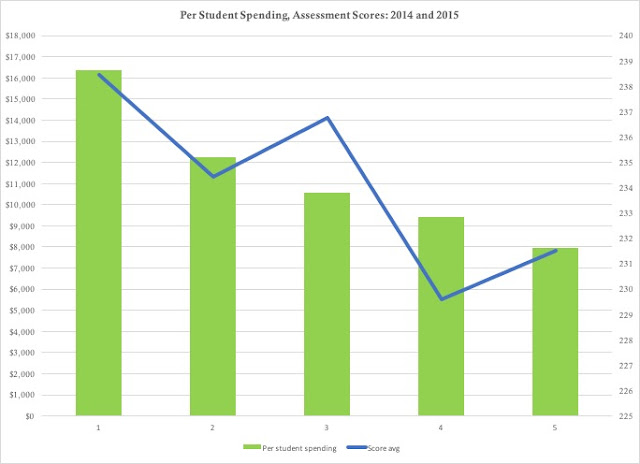 Figure 3, which looks similar to Figure 2 but reports different data in its columns, show that public schools do indeed produce better assessment scores with higher per-student funding. This is a good reason to argue for high funding in public schools - but it should not be construed as an argument against lower-cost private schools. All we know from this data is that public schools cannot perform well unless abundantly funded; a separate comparison of funding and private-school assessment scores (or similarly comparable performance data) would be necessary to conclusively determine what role funding plays in school performance.

a) the more localized school funding is, the more likely it appears to be that schools will perform well; and
b) if we do not want school choice, we will have to allow our schools to be expensive in order to produce high-performing students.

This was the last part of a four-piece series on the fiscal erosion of federalism. I will put these pieces together in a paper on federalism and government funding, with more details on the funding and performance of schools. I cannot promise when that will happen; until it does, I hope this week's series has been useful.
---
*) It would have been more reasonable to choose 12th-grade assessment scores, but they are not are recently updated as 8th-grade scores. The scores used in this comparison is from Math, Reading and Science assessments. The scores are added together, then averaged, by state. Scores are available for a total of 46 states. In the quintiles charts the 46 states are divided into four groups with nine states and one with ten.
Posted by Sven R Larson, Ph.D., Political Economist at 6:56:00 AM