The Fiscal Erosion of Federalism, Part 3

Blurring the Lines
How Independent Are Local Governments?


In the last installment of this series we learned that Wyoming appears to be relatively independent of federal funds. In 2016 we had the second-lowest share of federal funds in our state budget. As I explained, this can be read either of two ways: a prudent focus on fiscal independence, or such a massive expansion of in-state spending that federal funds have not kept up.

Unfortunately, in the case of Wyoming, the latter happens to be the explanation. We have the highest share of Other Funds spending of all states; our dependency on federal funds has declined only because we have decided to spend more in-state sourced money.

Inter-governmental fiscal relations are harmful to our federal government structure. The problem is not just one of states depending on federal funds (and being forced into matching-funds spending to keep the cash pipeline open), but also one of local governments depending on states.

In Figure 1 we can see the share of federal and local government money in local governments, by state. The dark-blue section of each column represents federal funds; light blue is state funds (except for Wyoming, where the state share is dark red): 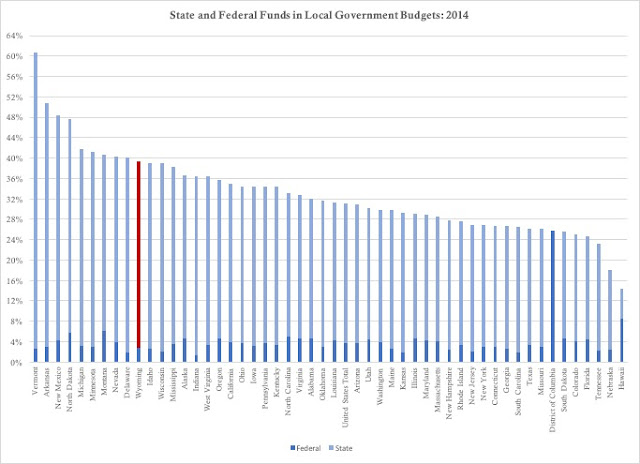 Again, this is not the highest dependency.In Vermont, 60.8 percent of local-government spending comes from "above"; in Arkansas it is 50.9 percent. Nevertheless, with close to four dimes of every dollar coming from the state or the federal government, our local governments are on the brink of losing their independence; what opportunities do you have as a school district, city or county to make your own policies if someone else, other than your taxpayers, foot the bill for what you spend?

From time to time, you can hear the argument be made that we need a high rate of state funds in local governments, especially school districts, because we are a rural state. The problem with that argument is that it does not hold up to scrutiny. In Maine, a rural state, local governments only get 29.8 percent of their revenue from the state or the federal government; in South Dakota the share is 25.7 percent and in Nebraska 18.1.

If they can localize funding of local governments in South Dakota, then so can we.

A lot of the state funds going into local government coffers are designated for school funds. With the education recalibration process ongoing here in Wyoming, it might be worth taking a look at where the school dollars come from. Figure 2 has the numbers, reporting the balance between state and local school funds (federal dollars are excluded for the moment). The green "tops" of the first 22 columns represent the 22 states where school districts get more money from their own taxpayers than from the state. For example, Nebraska school districts collect $1.81 within their own district for every $1.00 they get from the state; in South Dakota the ratio is $1.80 local dollars for every state dollar.

In Wyoming, which ranks 29th, the ratio is $0.79 local dollars per state dollar: 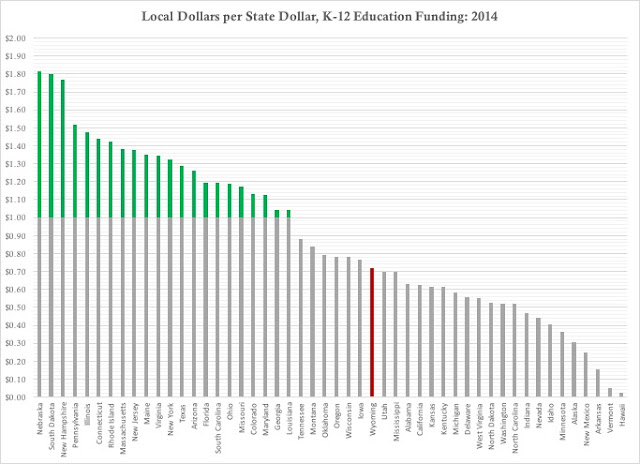 
In fact, if we look at this from the other angle, the state government provides 54.5 percent of all school funding in Wyoming. It is common with a high rate of state involvement in education, but at the same time, the South Dakota state government is on the hook for only 30.8 percent of K-12 education costs.

Is it really sustainable to maintain our high state share in school funding?

We have one more blog article to go on this subject - it will be up tomorrow - but before we leave, a short note on federal funds in school districts. The share remains low for now, especially compared to how deeply many states depend on federal funds. That said, it has been rising in the past 15 years, being ten percent or higher in 22 states. In Louisiana, the share is 15.3 percent, meaning that about one in seven dollars spent by Louisiana school districts is coming in to their budgets from the U.S. Department of Education.

Here in Wyoming, we still has a low federal dependency among our school districts: only 6.4 percent. That said, with a long-term tendency of growing federal involvement in education funding, it is worth raising the general question as to whether or not this inter-governmental funding model is sustainable over the long term. It is also important to ask if it is even compatible with our form of government, where powers of higher governments - especially the federal - are supposed to be enumerated.
Posted by Sven R Larson, Ph.D., Political Economist at 7:44:00 AM