Later this month we will get new data on personal income in the states. These will be important numbers, providing a hugely important indicator of where our state's economy is heading. Personal income determines household spending - the largest component of GDP from the demand side - as well as a significant part of tax revenue.
Even though we do not have a personal income tax (and hopefully never will get one either), personal income is the source of all revenue from sales and gross receipts taxes not paid directly by businesses. It is also the source or personal property taxes.

Until those numbers are released by the Bureau of Economic Analysis (BEA), let us take a look at personal income at the national level. It has a story to tell that we can learn something from here in Wyoming.

The following time series starts in 1950, though the BEA publishes personal-income data all the way back to the 1920s. We disregard the pre-1950 years primarily because there were violent swings in household earnings that distort long-term analysis. Normally, I would include those periods as well - from a methodological viewpoint, you should never "polish" reality in a statistical analysis - but in this particular case the years prior to 1950 do not make any meaningful contributions to our analysis.

Per capita personal income had some healthy growth rates in the 1950s and '60s (these numbers are not adjusted for inflation):

Toward the end of the 1960s, inflation began taking a toll on family earnings, leading to demands from workers for compensating income increases. This problem was accentuated during the 1970s, when getting a raise was more a matter of maintaining status quo economically, than getting ahead. Yet inflation outpaced personal income in the late 1970s, with cost of living going up by double digits and personal income growing by 9.4 percent.

The Reagan years brought much relief and new opportunities to America's families. Even though personal income growth slowed to 5.9 percent per year during the latter half of the '80s, inflation almost vanished from the economic radar screen. America's embattled middle class could sigh with relief and - at least to some extent - rebuild and improve their finances.

The real problems began after the Reagan years. Clinton's 1990s was strong economically, with GDP growth exceeding four percent in some years. Per capita personal income, though, grew more slowly than during Reagan, and part of the reason for this is that when Reagan cut taxes, Clinton actually raised them a little bit. This took a toll on personal income, primarily by somewhat curbing its growth.

As the economy slumped during the Millennium recession, there was a slowdown in personal income growth. This slowdown would have characterized Bush Jr's first term, were it not for his major tax cuts. However, a 4.5-percent annual growth rate in per-capita disposable income proved not to be sustainable: during his second term that growth rate plummeted to three percent.

It has drifted downward since then. The average for 2010-2016 is below three percent, a growth rate we have not seen in half a century. Short of a macroeconomic miracle - or some sound tax and spending reforms in Congress - we will remain at this low level of income growth for the foreseeable future.

One of the most important contributing factors to the slowdown in personal income growth is our expanding dependency on entitlement programs. Figure 1 shows the share of pre-tax, total personal income that comes from transfer payments (see right axis) and compares this share to the growth rate in current-price, disposable personal income (left axis): 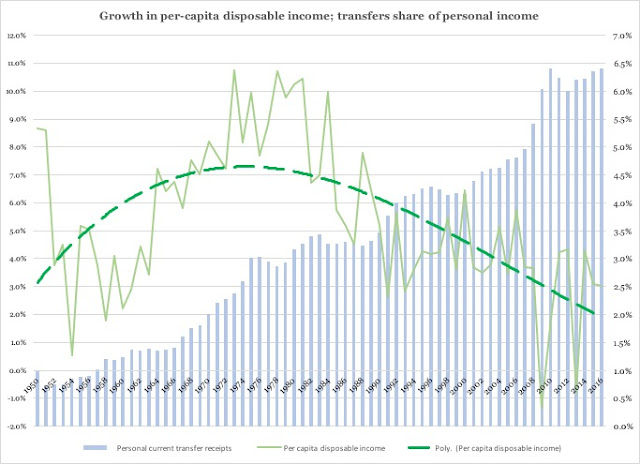 The growth in transfer payments as share of our personal income is not the only contributing factor to slower income growth, but it is one of the major. Some of the transfers are for the elderly, in the form of Social Security and Medicare, but since the start of the War on Poverty in 1964, Medicaid and "other" programs - including welfare - have expanded quite a bit:

In 1960, prior to the War on Poverty, Medicaid, welfare and other non-elderly entitlements provided about 23 percent of all the transfers that went to American households;
In 1970 that share had increased to almost 30 percent;
In the 1980s, the non-elderly transfers (or entitlements) once again increased their share of total transfers to households, exceeding 36 percent by 1995.

During the 2000s, some 37 cents of every dollar that American households receive in transfer payments has been from non-elderly programs. This means, bluntly, that those Americans who receive money from government increasingly do so based on the very fact that they are poor or almost poor.

In other words: egalitarian income redistribution has set some solid roots in the U.S. economy. This has a lot of unfortunate consequences that I will be happy to discuss separately; one of them is that people are encouraged to stay in low-income, low-productive jobs. A vicious circle begins where low income means lower purchasing power, which in turn holds back consumer spending, which keeps American businesses back, which means they cannot pay as high wages and salaries as they otherwise would be able to do...

So what does this have to do with Wyoming? Two things:

1. We can benefit a great deal from block grant reform that allows us to redesign welfare programs here in Wyoming. We can make sure our welfare sector is concentrated to its conservative core assignment, namely to provide a last-resort, entirely temporary safety net, as opposed to meeting some egalitarian goals set by the federal government.
2. We need to remove obstacles to business growth across our state and across all industries. We need to end corporate-welfare programs such as ENDOW, and we need to scrap every single plan for higher taxes. We need to remove regulations, and we need to solve the problem with access to venture capital in our state (a problem that should have been addressed a long time ago by our legislators).

With these policies we help our state break out of its trend of stagnation, and avoid further decline. But we are running out of time.
Posted by Sven R Larson, Ph.D., Political Economist at 10:23:00 AM