On Thursday next week, the Revenue Committee will meet in Saratoga to discuss a Gross Receipts Tax on the Wyoming economy. There are some different ways that this tax could be implemented, but under the reasonable assumption that the tax will apply across the board to private-sector industrial activity, every private business in the state would be impacted. This means that everywhere you go to spend money, you will encounter this tax. Your hairdresser will charge you extra; your auto repair shop will add the tax to its bill; your realtor will up his share of the sales price in order to collect what the state wants.

Your plumber, landlord, bank, lawyer, Uber driver... they will all want more of your hard earned money.

At the end of the day, that little "more of your hard earned money" could indeed have a significant impact on the economy.

The goal with the tax is to eliminate a budget deficit that, according to our legislative leadership and our governor, is entirely within the education budget. Since that is how they want to frame it, let us accept their false premise for the sake of reasoning. Slowly but steadily, our leading elected officials have come around, from full-scale denial to gradually admitting that the deficit is as big as I have predicted for a year now: first they admitted that it was $400 million, then we heard $720 million.

At this point, it seems like the legislative leadership wants to focus on the immediate $400-million deficit, leaving it to future legislatures to deal with the $702-million number (very close to my prediction of $700 million by 2020, unless we see drastic spending reforms). Let us therefore use that number and build a picture of what its impact might be on private-sector, tax-base generating economic activity here in Wyoming.

The best way to get an idea of how a tax would impact the economy is not to run simulations of the future, but to go back in time, add it to the economy as it was and then analyze the difference.* Therefore, let us do this by assuming that the legislature introduced a tax of the expected proportion in 2005. That year,


A gross receipts tax of the size we can expect here in Wyoming would, if put to work in 2005, have taken $307 million out of that $23.6 billion worth of private-sector economic activity. This is equivalent to 1.3 percent - a tax rate that should not worry anybody, now, should it?

Yes, in fact, it should. First of all, a tax like this never remains the same, especially when it is created for a specific purpose such as paying for education. The revenue from the tax are dependent on the performance of the private sector, while education spending depends on the laws that the legislature has passed in order to define the quality and quantity of K-12 education.

Furthermore, there are salary advancement contracts, benefits and other variables relating directly to the staffing of our schools. In short: there is nothing that says the tax that pays for education will actually be able to cover its costs.

To illustrate this point, consider Figure 1, where we start out by collecting $307 million to fund a hypothetical deficit of $307 million in the education budget. The items that the new Gross Receipts Tax pays for are still there, in the budget - the only thing that has changed is that we now have a new tax in place to pay for them. 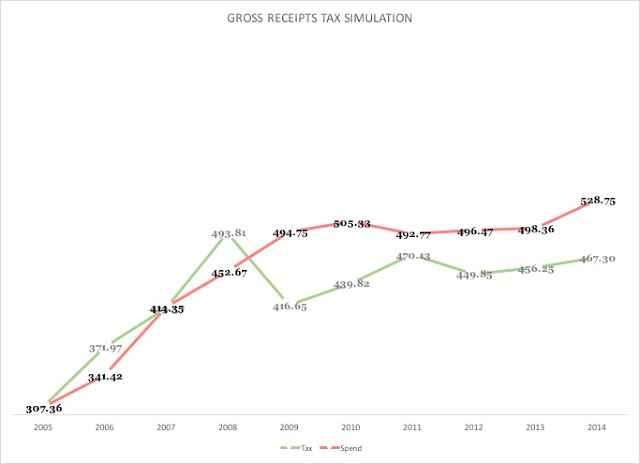 Already four years into its existence, the revenue from the Gross Receipts Tax would fall short of actual education spending. Now, admittedly, the years included here cover the Great Recession, which brought a serious economic downturn to both our state and the national economy. Tax proponents will say that such a downturn is anomalous and it is for that reason that we keep reserve funds on tap.

The problem with this argument is that in our realistic simulation, there is no recovery in the Gross Receipts Tax revenue, at least not strong enough to catch up with education spending. In fact, if we extend both functions through 2016 the gap will expand; the serious downturn in minerals activity began in 2015 and spread to the rest of our state's economy in 2016.

So, what is the solution to an inadequately performing Gross Receipts Tax? Well, if our legislators introduce tax because cutting education, like eating children, is wrong, then there is only one solution to this new deficit: raise the tax.

By this policy principle, what started out in this simulation as a 1.3-percent tax in 2005 would easily reach the 1.7-2 percent bracket by 2017.

In other words, a creeping tax hike.

Obviously, a Gross Receipts Tax would negatively impact private-sector economic activity. The impact would be different depending on industry and size of the business, so a more detailed account of its impact will have to wait until we know more about the actual nature of the tax that the Revenue Committee will discuss. However, based on the simulation we have done here, we can establish some basic numbers:


These numbers, of course, are from a historic simulation. For the future, the numbers would be different depending on the actual design of the tax, chosen policies regarding its rate in the future, and the performance of the private sector independently of the tax. However, it is a fair assumption that even a "small" Gross Receipts tax would put thousands of private-sector jobs in jeopardy. This, in turn, brings up the dynamic effects of the tax, to which we will return as soon as we know more about its exact design.

The upside, of course, is that while thousands of employees and business owners in the private sector will have to shoulder a heavier burden, and while many of them will lose their jobs, we can all sleep well knowing that thanks to this new tax, not a single education administrator will lose his or her job or have to take a cut in their salaries or benefits...
---
*) Forecasts of the future can be useful, and are sometimes necessary. However, in a case like this, where we are dealing with a high degree of uncertainty, the extra work to simulate the future is not going to add enough information to merit the complexity of the analysis.
Posted by Sven R Larson, Ph.D., Political Economist at 10:09:00 AM