A short note today. As an amendment to yesterday's blog article about employment trends here in Wyoming, today we will take a quick look at trends in hours worked and weekly earnings. The data is available for all major industrial categories; for now, let us concentrate on the private sector as a whole, the minerals industry and the non-minerals industries bundled together.

In the past year, from the first quarter of 2016 to the first quarter of this year, Wyoming has lost 5,700 private-sector jobs.
That is just over half as many jobs as we lost from 2015 to 2016, but it is nevertheless a clear sign that we have not seen the end of the downturn yet.

A review of weekly hours and weekly earnings reinforce the impression that the downturn is not yet over, but they also confirm my analysis from earlier this year that the downturn is going to flatten out during the course of 2017. This is, again, provided that there is no legislative mess-up in the form of, oh, say, a gross receipts tax. But if the legislature can keep its fingers out of the private sector, then what we are seeing now is an emerging new stability in our state's economy.

Figure 1 reports employment (bars), weekly earnings (blue) and weekly hours (green) in the total private sector from 2008 through the first quarter of this year: 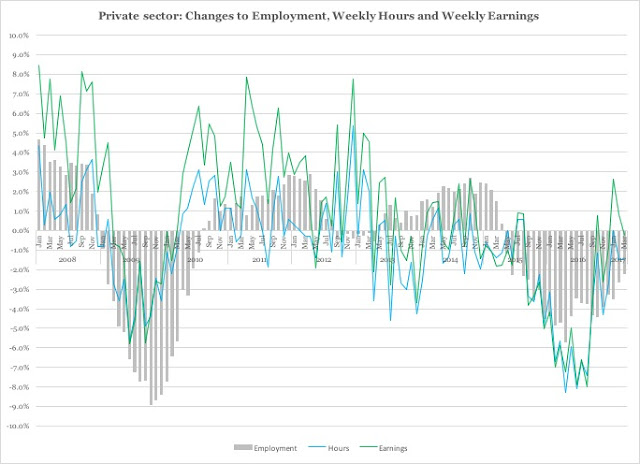 
After the Great Recession decline in 2009-2010, all three variables recovered somewhat during 2011 and 2012. We then saw a stabilization in work hours per week (around 36) and weekly earnings (at approximately $830).

Bear in mind that this is the entire private sector; these numbers are more an indicator of an overall trend than anything else. What matters most is which way they are heading over time, such as over the course of 2013 and 2014. By the end of 2014, the average private-sector job paid five percent less than it did in 2012; the average work week was six percent shorter, all while total private-sector employment increased by 3.2 percent.

The slow decline in hours and earnings turned into a dedicated decline in 2015: number of employees, weekly hours and weekly wages all fell by 4.5-5 percent over the course of that year (again counting end-of-year values). Since then the decline has come to a halt, except in employment.

This is significant: when wages and hours worked stop falling before employment does, it is a break in a trend. In our case, that break will result in a stabilization in employment, with businesses using earnings and hours as management tools for short-term swings in business activity.

To some degree, this appears to have happened already in the minerals industry. Figure 2 has the story: 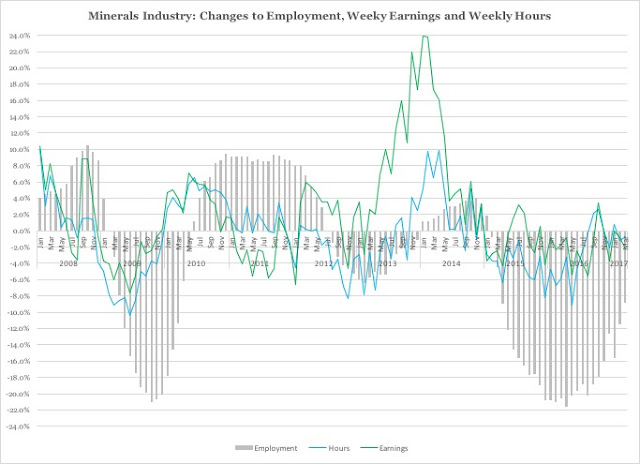 
Here are the numbers for the minerals industry for the first three months of this year (changes measured over previous year):


It will be interesting to see these numbers for April-June. A good prediction is that we will see a rise in earnings, an end to the decline in employment and a steady course for hours. In other words, the signs of a new normal.

Last on our list is the non-minerals conglomerate of industries: 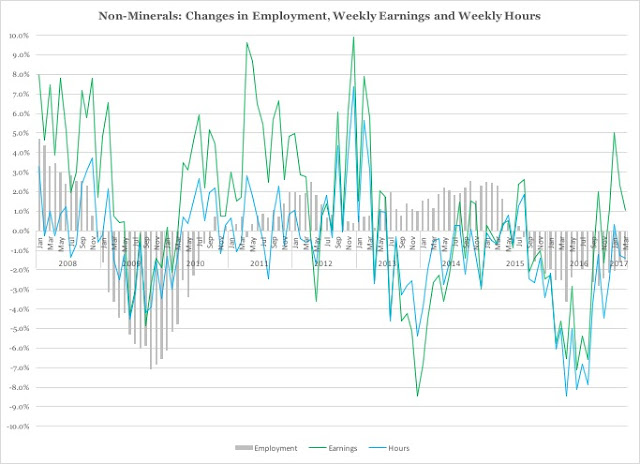 
Here, earnings have already popped up a bit, though jobs are still being lost (as I explained yesterday). The diversity in trends among individual industries precludes any definitive conclusions as to wages and hours, but with that caveat in mind, it is reasonable to expect that a closer examination of data for wages and hours will find moderate signs of an emerging stability.

1. The Wyoming economy is still weak and will remain so for the foreseeable future;
2. There are indications that we are leaving the decline behind us and entering a "new normal"; and
3. That new state of stability is still so fragile that any legislative missteps - such as, oh, I don't know, creating a gross receipts tax? - will put us back on the downslope again;

and, last but not least but most important:
4. A new state of stability is not the same as an economic recovery.
Posted by Sven R Larson, Ph.D., Political Economist at 1:11:00 PM