As the Joint Revenue Committee ponders whether or not to move ahead with a Gross Receipts Tax (I have some hopes they will come to the sensible conclusion and drop the idea entirely) others are loudly calling for new taxes to shield government from spending cuts. Among the statist advocates we find this contribution from an outfit called Better Wyoming:

Believe it or not, however, it wouldn’t take that huge of a tax hike to cover public education, and a little more would go a long ways toward stabilizing the state’s entire budget, even during down times for the mining sector. Legislators will posture like raising taxes is politically unthinkable—and, of course, taxes are unpopular in a state that’s used to mineral companies footing the bill for our public services. But establishing a modest corporate and personal income tax, along with increases in our low property taxes and/or sales taxes, and topping it all off with a hike of Wyoming’s “sin” taxes on cigarettes and beer would just about do it for education, with no further cuts beyond the $55 million schools have weathered in the past two years.

Apparently, the fine gentlemen behind Better Wyoming think that a $400-million tax increase is nothing to make such a big deal out of. The $400 million is the absolute minimum needed to close the budget gap; that number does not consider the overall downward trend in the budget, nor does it consider the bad dynamic effects of tax increases.

It is right there that the bright minds over at Better Wyoming go wrong. A $400-million tax hike is equivalent to approximately $800 for every man, woman and child in our state. Each and everyone of us will have to give up that much money, on average, in the form of higher taxes, higher cost of living or lost income. One way or the other, a family of four will, on average, have to give up some $3,200 out of what they have today - every year.

Perhaps Better Wyoming would be so kind as to explain to a man or woman who makes the average pay of $37,000 per year on a non-minerals private sector job, just what he or she can spare, get rid of, does not need? What excessive luxury is the average Wyoming family enjoying that Better Wyoming thinks would be much better spent in the hands of government?

The last thing Wyoming families need right now is a massive tax hike. It does not matter if it comes in the form of a gross receipts tax, a corporate income tax or a personal income tax. A tax on a business is a tax on its customers and its employees. Ask your local carpenter, plumber, auto repair shop, gas station owner or taxi company how business has been lately. Ask them how much they can afford to spare to pay the corporate income tax that Better Wyoming wants to impose on them.

Instead of the usual statist tax rhetoric, let us take a look at some cold, hard facts about the Wyoming economy. Today the Bureau of Economic Analysis released the latest state GDP numbers, which means that we now have a complete picture of what our state's economy looked like through 2016. This is very important: for some time now, labor market data has suggested that 2016 was almost as bad as 2015. The new GDP data confirms this picture.

Before we discuss the actual performance of the Wyoming economy, here is an idea of how big it is as well as the size of individual industries:

Notably, government is our second largest industry. What is even worse is that if the current trend in private-sector activity continues, government may actually pass mining at a not-too-distant point in time. In fact, adjusted for inflation, at current growth rates (five-year averages) government will surpass minerals as the largest industry in Wyoming.

It is a very remote possibility that this will actually happen, but the point behind this more or less hypothetical scenario is that government is indeed outgrowing the sector of the economy that pays for it.

The root cause of our over-bloated government is the welfare state itself, but here in Wyoming we have added insult to injury by short-sightedly expanding government based on a temporary boom in severance taxes. Figure 1 explains this irresponsible expansion, reporting annual, inflation-adjusted growth for the Wyoming GDP from 1998 through 2016. Please note that...
1 represents the economy based on which our state legislature and our local governments grew really big; and
2 represents the economy that is supposed to pay for that government: 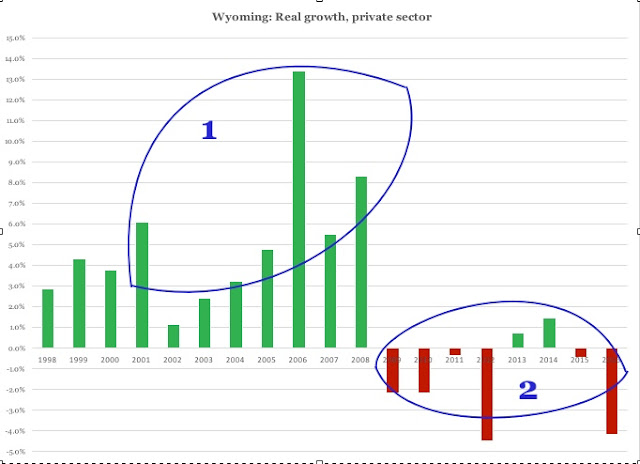 Looking specifically at the past two years, here are the annual changes in economic activity, in inflation-adjusted millions of dollars, quarterly for the minerals industry (grey) and the non-minerals private sector (blue): 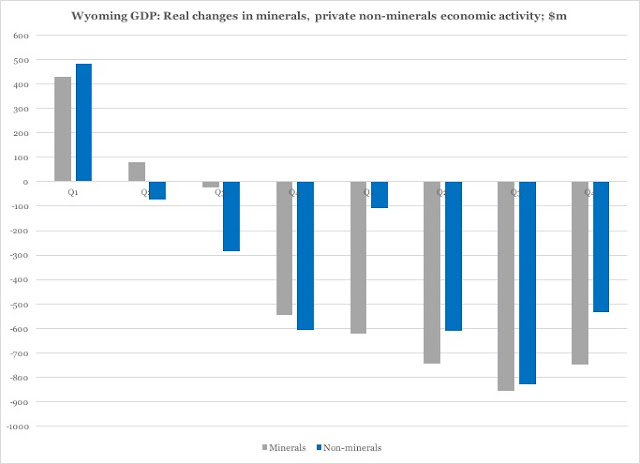 Again, we can see signs that the decline that started two years ago is now tapering off. That is good news, provided of course that we get no new policy initiatives that upset this new stability.


To further emphasize the necessity of a growth-friendly fiscal policy here in Wyoming, here are the real growth rates for individual industries in 2016:

The minimal decline in government spending is the result primarily of a three-percent decline in the third quarter of 2016. Other than that, government stayed mostly even.

These GDP numbers deserve another, closer look in the context of the jobs data I reported on earlier this week. That, however, will have to wait until after the weekend. Until then, enjoy a couple of days off if you can.