We are going to get to the second part of county-level employment and earnings, especially since the first part was very popular. However, I do have to take issue with an article by Heather Richards in the Casper Star Tribune two days ago. Sadly, the newspaper's reporting was not up to standard (a rare occurrence).

Richards then goes on to give the impression that our high share of government workers - in addition to Robinson's explanation - has something to do with the recent decline in private-sector employment across Wyoming.

Heather Richards is generally a good reporter, but in this article she falls short of good factual standards. It would have been easy for her to read my blog and find out that this is not at all a new phenomenon. I would also have been happy to explain to her where Robinson goes wrong. Since Richards did not do that, I will take the opportunity here and now, instead, to put her article in its proper context.

It is important to get the facts straight about the Government Employment Ratio, or the GER, which is really what we are talking about here, which measures the sum of state and local government employees per 1,000 private-sector employees. Generally, the government-to-private ratio in our economy, whether in terms of employees or other economic variables, is an important indicator of how our economy is performing. As a general rule, the smaller the ratio, the better the economy is doing.

Another important part of the GER is that while it may rise and fall somewhat with the business cycles, its fluctuations are not as violent as the Casper Star Tribune article would have us believe. Here are the GERs for all 50 states from three different years. We start with 2007, when the business cycle peaked right before the Great Recession:* 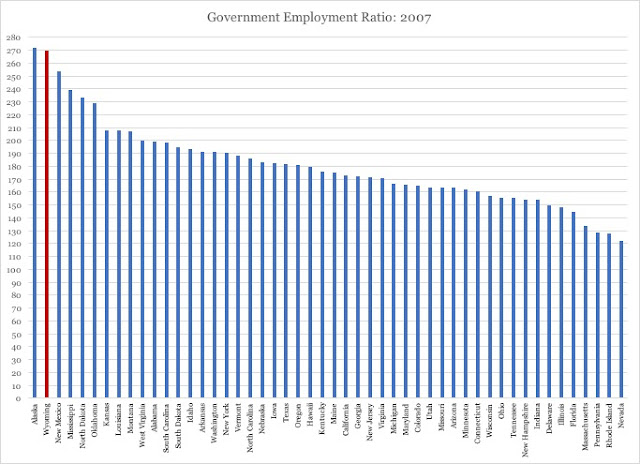 This year, Alaska outdid Wyoming by a hair thin margin: the Frontier State had 272 state and local government employees per 1,000 private employees; Wyoming had 270.

These numbers refute two points put forward by the Tribune. First, this was a year of strong economic activity, especially in Wyoming. During the peak of that business cycle, in 2006-08, our state's GDP expanded by 8.5 percent per year, on average. Therefore, it is simply not true that our very high GER would be the result of a recession. We were almost tied with Alaska for first, despite at the time having one of the strongest-growing economies in the country.

The 2007 numbers also refute the notion that a high GER is typical for rural states. Nevada's GER was only 122, lowest in the nation, even lower than very-urbanized Rhode Island (128). Furthermore, New Hampshire has no big cities, only moderately-sized ones, yet their GER was 154 in 2007, significantly lower than neighboring, and economically and geographically similar Vermont (188). Oregon, hardly an urbanized state, had a GER of 181, nine points below New York.

In other words, it is always good to do your homework before you start explaining away the obvious fact that Wyoming has decided to create a bloated government.

The GER numbers from 2012 reinforce this point: 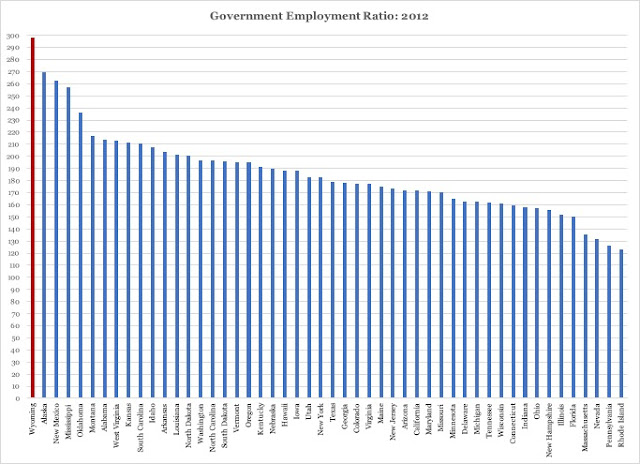 Wyoming is now at the top of the rank. Since 2012 was the year when the recovery from the Great Recession really got under way, one would expect that if the recession contributed to a high GER, it would be falling by now. That did not happen: at 298 our GER was significantly higher than in 2007. Alaska, on the other hand, saw its GER decline marginally to 270.

Nevada's GER had climbed to 132, but still remained less than half of ours. 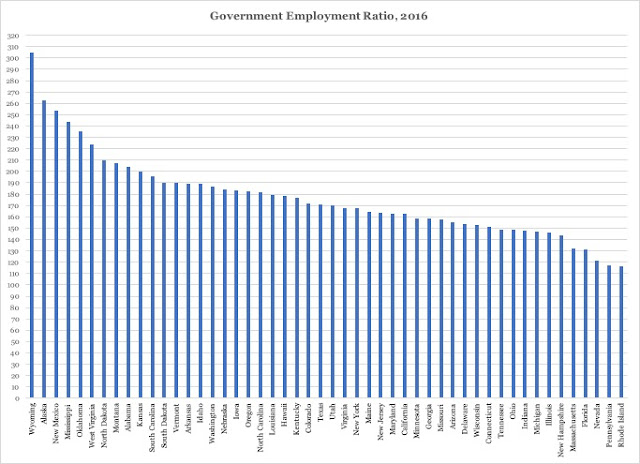 Wyoming remains in the lead, with 305 state and local government workers per 1,000 private-sector workers. The margin to Alaska has now increased, as the Frontier State's GER has fallen further, down to 263. This is important, as it demonstrates a distinct policy difference: Alaska has been hit almost as hard as Wyoming, primarily by declining oil prices, and with their General Fund depending to 90 percent on that particular industry, their government budget problems became urgent more quickly than ours. However, as they lost private-sector jobs, they also decided to downsize government accordingly.

But don't take my word for it. Here is a direct comparison between rural Wyoming and ultra-rural Alaska: 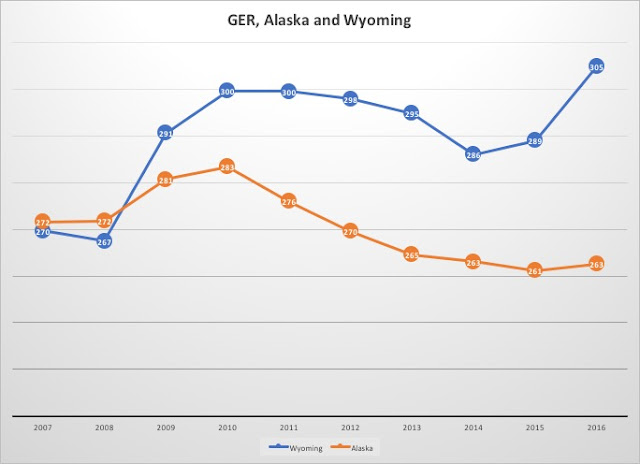 But even if we have now solidly refuted state chief economist Robinson's claim that a high GER is symptomatic for rural areas, suppose we accept his argument for a moment. According to the Casper Star Tribune, rural areas depend on government more than urban areas because government needs to be of a certain size to deliver certain services, such as education.

When was the last time you heard such a good argument for privatizing K-12 education?
---
*) All numbers are calculated based on raw data from the Bureau of Labor Statistics.
Posted by Sven R Larson, Ph.D., Political Economist at 2:30:00 PM