Never bark at the Big Dog. The Big Dog is always right.

In a Casper Star Tribune article from Sunday, Wyoming Mining Association Director Travis Deti explains that the coal industry is not "self correcting", in other words will not bounce back to historic heights. We are, he says, "going to see a new normal as far as coal production".

See, I told you so. Wyoming, as an economy, is in a new normal not just when it comes to the minerals industry, but in every other aspect - except government. Our state and our local governments have yet to adjust themselves to this new economic reality.

Sadly, the Tribune article really does not help. Yes, it quotes Director Deti, and he leaves nobody in doubt about the future of minerals in general and coal in particular, but the quotes from him appear down toward the end of the article. Reading it, one easily gets the impression that the rise in coal production in the third quarter of 2016 is somehow a first indication of a recovery.

Understandably, any sign of such good news will make the tax-and-spend segment of our legislature jump up and down with joy. Therefore, let me explain the background to the light in the coal mine that the Tribune subtly has mischaracterized as a turnaround.

Yes, there was a spike in coal production late last year. The reason, however, has nothing to do with a sustained recovery in the market for coal On the contrary, the bulk of demand for coal, namely for power generation, is still trending downward. As Figure 1 reports, coal consumption for electricity (blue columns and blue trend line) is in a decline together with the price per short ton (green): 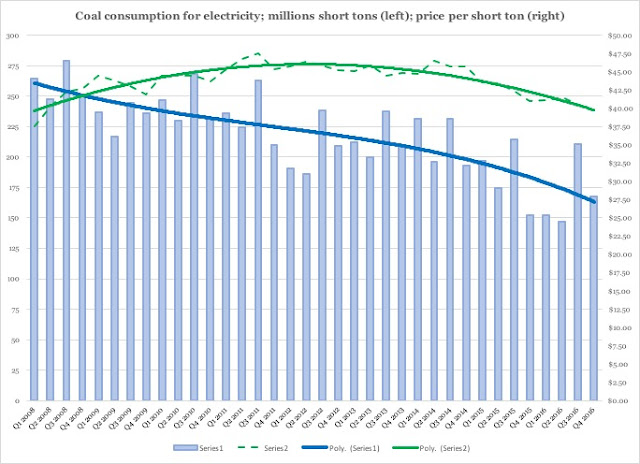 
It is important to understand what it means that these two trends are negative simultaneously. A downbound trend in prices means that supply exceeds demand and suppliers are trying to find the new, lower price where there is no longer an excess supply of coal on the market. By contrast, upbound trend in prices means that demand exceeds supply - more buyers' money is chasing coal production than producers can keep up with. The price continues to rise until production has caught up, or buyers reach a price cap above which it no longer makes economic sense to buy coal.

The meaning of trends in the quantity consumed is a bit more complicated. A trend of rising coal consumption is fairly simple: demand exceeds supply. However, a downbound trend, as in Figure 1, has either of two meanings: demand has declined below available supply; or there are supply restrictions due to, for example, regulatory hurdles in bringing coal to the market.

The easiest way to distinguish between the two kinds of quantity reduction is to compare it to the price trend. If a decline in volume is combined with a rise in prices, then the cause of the decline in volume is found on the supply side. That, in turn, would imply regulatory restrictions on production. Coal would be rationed and therefore its price would rise sharply.

If, on the other hand, the price is declining over time and do so together with a decline in volume, the cause of the latter is in consumers simply buying less coal. This is precisely what Figure 1 tells us: there is less domestic demand for coal than there is supply.

So what caused the spike in coal production in Q4 of 2016?

Interestingly, the aforementioned Tribune article does not mention coal exports. Not with one word. Yet the fourth-quarter production rise correlates well with a 54-percent increase in U.S. coal exports from Q3 to Q4 last year: 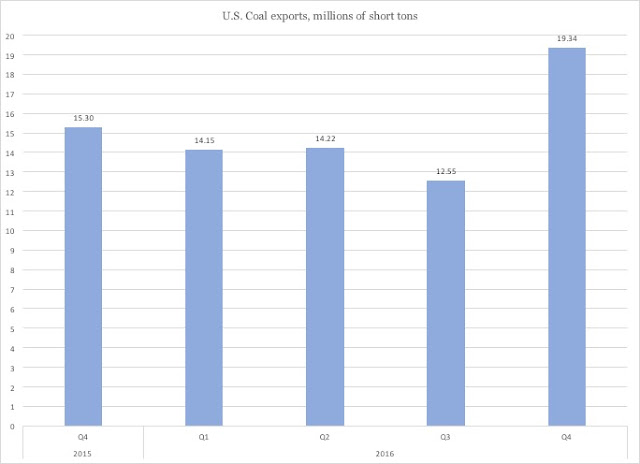 
Nine countries are responsible for almost 90 percent of this increase:


It is unwise, not to say unintelligent, to build any hopes for a recovery in coal production on a spike in exports. Most of these countries are in an economic slump and will continue to perform modestly in the near future. The causes of an increase in coal imports from the United States are likely as diverse as the list of countries, again making it unwise to suggest a trend in exports.

As for policy makers here in Wyoming, I have only one recommendation to make: do not assume, or even speculate about, a rebound in coal. Go about the state's budget as if the current level of economic activity will remain for the foreseeable future - and reduce state spending accordingly.
Posted by Sven R Larson, Ph.D., Political Economist at 8:30:00 AM