Today is an exciting day! The first GDP growth numbers are in for 2017. This morning the Bureau of Economic Analysis released an advance estimate of the U.S. economy for the first quarter. Compared to the first quarter of 2016, Gross Domestic Product increased by 1.92 percent, with private consumption reaching a mildly cheerful 2.77 percent.

Neither number is impressive by historic comparison, but they are appropriate in one way: this was the last quarter when the economy was affected by the Obama administration's tax-and-regulate policies. From hereon, it will be President Trump's economy.

Before we move on, a crash course in national accounts might be helpful. GDP is measured in three ways: spending, income and value added. By definition they always add up to the exact same number.

A common question about GDP is why it can grow more slowly than so many of its components; the answer is, of course, related to how much of GDP each form of spending accounts for. Private consumption, C, generally accounts for 70 percent of GDP, making it by far the most important form of economic activity.

It is also important to keep in mind that exports and imports affect GDP in opposite directions: exports add to GDP since the goods and services that constitute exports are made here; by contrast, imports deduct from GDP because those products are made abroad. The net of our foreign trade, "net exports", is what is added to (if we have a trade surplus) or subtracted from (with a trade deficit) our Gross Domestic Product.

With all this in mind, let us take a closer look at where the U.S. economy is right now. To begin with, Table 1 provides GDP numbers for the past five quarters - please observe that these are current-price numbers, in other words, including inflation. They do not give us an accurate idea of the growth rates in our economy, but they do tell us how big our economy is. Current-price GDP data is important for many reasons, not the least of which is the assessment of a nation's general market for businesses. It is also an essential tool for estimating the tax base. Percentages are for the spending category's share of GDP as of Q1 2017:

Table 1 - Numbers in billions of dollars


Next, let us put the current state of the economy in a historic perspective. For this we use inflation-adjusted GDP numbers, in this case a so-called chain-priced adjustment based on prices from 2009. It is a method that works well with aggregate data, such as the main components of GDP, but not so well if we were to look at more detailed items, such as consumer spending on groceries and clothes, or business investments in heavy trucks. For those data series, other methods are more appropriate for eliminating inflation.

Table 2 reports the same numbers as in Table 1, but this time adjusted for inflation:

Let us now put these numbers in contrast to how our economy has been performing historically. Figure 1 reports real GDP growth, on average, by presidential term, which are counted as starting with the second quarter the year they are sworn in and ending with the first quarter four years later. "Kennedy" stands for what would have been Kennedy's complete first term, had he not been assassinated: 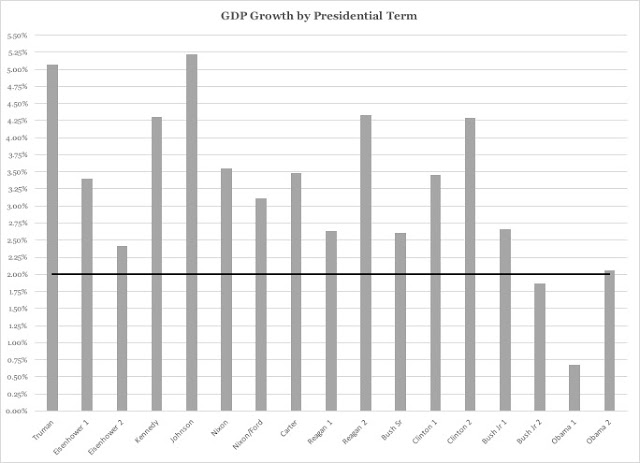 
It is interesting to note that growth rates above four percent were not entirely unusual back in the 20th century. Truman, Kennedy, Johnson, Reagan 2 and Clinton 2 all averaged more than four percent growth. In fact, between World War II and the new Millennium, there were more presidential terms when GDP growth exceeded four percent than with GDP growth at less than three percent: only Eisenhower 2, Reagan 1 and Bush Sr saw such weak growth. But even then, the economy still performed relatively well compared to what we have seen under the last two presidents. We have not seen a single presidential term with three percent growth since Clinton left office; the three last terms actually hold the weakest growth records since World War II:

In Obama's second term the economy actually managed to average marginally more than two percent per year. This put us right above the Industrial Poverty threshold, below which an economy is moving backwards in terms of standard of living. Between two and three percent an economy is essentially just maintaining its standard of living; only when we climb above three percent we start getting more prosperous again. The upper boundary of the "maintenance band", namely three percent, will adjust downward when we make appropriate adjustments to the role of government in our economy; with a government that does not redistribute, we could see a net increase in our standard of living already at 2.5 percent annual growth.

The long-term drift into economic stagnation, which was reinforced by the growth rates for the first quarter of this year, is particularly worrisome because we have seen a clear, thus far unbroken trend of stagnation in Gross Fixed Capital Formation: 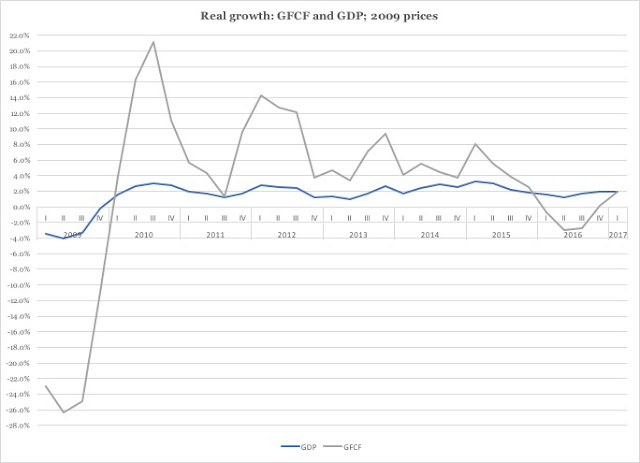 
The farther we got into the Obama presidency, the less interested businesses were in investing in the U.S. economy. It remains to be seen if that will change under President Trump. For our country as a whole, it is worrisome when businesses resort to basically just maintaining what they have; for Wyoming, the national trend means we have to fight even harder to do everything right with our economy, because we cannot expect that much activity in the rest of the country to spill over to us.

With all that in mind, at least we seem to have a resilient private sector. Within the confines of an overly tax-heavy, regulations-prone government, our entrepreneurs and households are doing their best to stay afloat. On the regulatory side, President Trump is off to a good start in his first 100 days; if he can get his tax reform plan through Congress he will do even more to help bring back growth to our economy. If, on top of that, he could get serious about the federal government's economically harmful spending habits, we could easily get back to four percent growth.
Posted by Sven R Larson, Ph.D., Political Economist at 9:34:00 AM