Another Argument for Privatizing UW

Back in December I made the case for privatizing the University of Wyoming:

Academic performance is at the epicenter of the private-vs-public issue. Again, I am sure the faculty at UW is doing a fine job educating their students, and the Wyoming workforce is full of UW graduates who excel in their professions of choice. Nevertheless, good can always become better: private universities consistently rank higher than public universities. Of the top-20 ranked universities in the country, only one is a public school, namely University of California at Berkeley, which is tied for 20th place with Georgetown and Emory. The University of Wyoming is ranked 171st.

There is also a fiscal side of the privatization argument.
The University of Wyoming relies heavily on taxpayers, collecting ten times more tax dollars as share of their total budget than public universities of much better ranking. Given that our state government is in a long-term, very likely permanent, fiscal crisis, it is unreasonable to assume that the university should continue its operations with maintained fiscal reliance on taxpayers.

Quite the contrary: academic education is a good example of a government function that would be notably better taken care of in private hands. In other words, this is a great point in time to start a conversation about how to privatize the University of Wyoming.

On April 20, we got yet another argument for privatization. An organization known by its acronym SHEEO - the State Higher Education Executive Officers - published its annual financial report on higher education. For us taxpayers in Wyoming, it was not a very uplifting read. In Table 9, page 53, the report presents data for per-capita higher education support by state, as of 2015.

Guess what state throws more taxpayer money into academic education than any other? 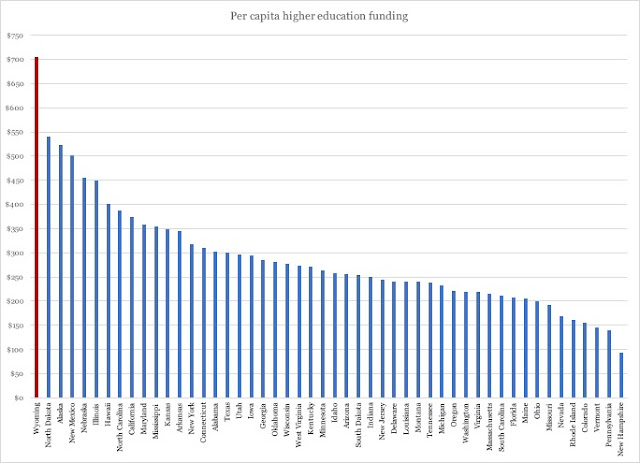 The U.S. average is $283; we spend $705 here in Wyoming. This means, plainly, that we spend almost 2.5 times as much per capita on higher education than the national average.

For those who think that cutting taxpayer funds to higher education is unthinkable, here is a simple fact to consider: even if we reduced taxpayer funding to the University of Wyoming by 50 percent, we would still be spending a good chunk more per capita on higher education than the nation as a whole. 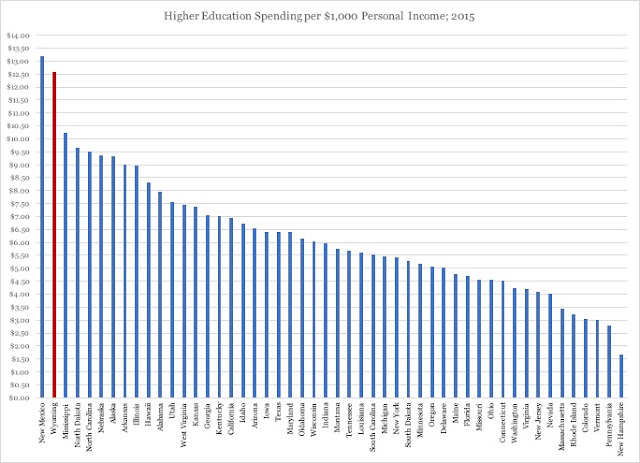 While we are "only" second worst in this ranking, the bad news is that since 2016 we have lost eight percent of our total personal income here in Wyoming. This may have been enough to push us past New Mexico: from 2015 to 2016, per-capita personal income (which we can use assuming interstate migration is marginal) increased by 2.1 percent in the Enchantment State, while declining by 1.7 percent in Wyoming. That may be enough to push us to the nation's top spot in Figure 2.

Again, we can cut our funding in half, relatively speaking, and still spend more than the nation as a whole: our higher-education funding per $1,000 of personal income, which amounts to $12.57, is 213 percent of the national average.

Higher education is yet another area where our legislators have lavishly doled out tax revenue over a long period of time, evidently with no regard to the consequences once government runs out of other people's money. Those chickens are now coming home to roost. Our educational institutions, from the University of Wyoming all the way down to our elementary schools, and all the associated bureaucracies, have been overflowing with milk and honey for years and years.

Now that the milk has soured and the honey is stale, our elected officials are in an uphill battle against the fiscal-panic clock. They understandably balk at going out to generously compensated government employees to tell them "sorry, guys, we stretched ourselves a bit thin, we are going to have to let the private sector take over". Yet that is exactly what they need to do.

As a research-heavy institution, the University of Wyoming is well suited to replace tax dollars with private money. I have developed a privatization model as an invitation to a conversation about this subject. I realize that there are many opponents out there, rejecting my plan upfront. I invite them to at least consider the idea.

And its alternative: what will the university do when our state hits the same point of fiscal panic where Alaska finds itself today? They are now, in full panic mode, slashing government spending without structure, without the aim to make their state stronger. The University of Alaska system is under enormous fiscal pressure and can only come out of this fiscal-panic episode as a weaker academic institution.

Is that what we want for the University of Wyoming? Or do we want to be proactive and reorganize the university so that it will stand academically stronger and fiscally more independent in the future?
Posted by Sven R Larson, Ph.D., Political Economist at 1:13:00 PM