Time for another update from the labor market. The Bureau of Labor Statistics has published its state-level employment numbers for February. These are preliminary numbers for now, but usually there is not much adjustment to them once they become definitive.

A comparison of these latest numbers to the numbers for the month of February, ten years back, gives us a glimpse of the overall trend in our state's economy. As Table 1 explains, the negative trend continues:

That said, if we measure the changes in employment as percentages, the same story emerges as I have reported before. The decline in employment is tapering off:


The accelerated job loss in coal mining is a matter of concern, of course, but even with that in mind I maintain my forecast: our state will soon be in a "new normal" with permanently lower private-sector employment and overall lower economic activity. We will see the end of the downslope during the second half of this year.

As I have pointed out many times before: this does not mean the economy will turn upward again. It won't, and one of the reasons for that is our that our state government as well as local governments insist on maintaining "business as usual" as far as they possibly can. Table 3 reports state and local government employment, again for the month of February:
Table 3


As a direct consequence, the Government Employment Ratio for Wyoming is now back where it was before Governor Mead de facto froze state spending soon after he took office: 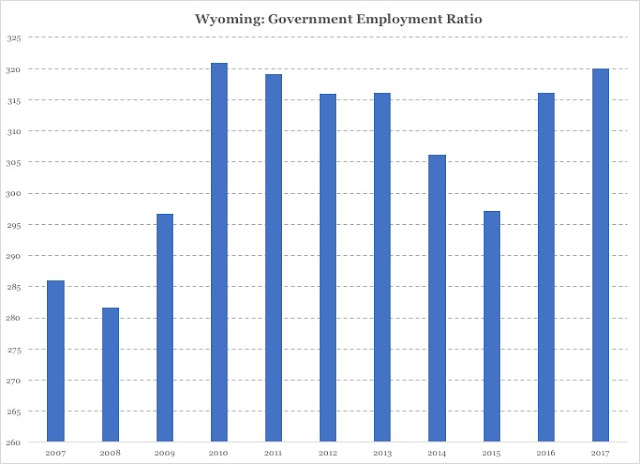 The Government Employment Ratio is calculated by dividing private employment with the sum of state and local government employment, and multiply the ratio by 1,000.

The good news is that a protracted period of private-sector job losses will soon come to an end;
The bad news is that:
a) there will be no recovery when the job-loss period is over; and
b) with a rising Government Employment Ratio, we still have a major problem with an excessively costly government here in Wyoming.
Posted by Sven R Larson, Ph.D., Political Economist at 9:59:00 AM