U.S. Economy No Help to Wyoming

As the 2017 legislative session closed, it was clear that Wyoming had dodged a tax bullet - or a hail of tax bullets. This is good both short term and long term, first and foremost for our state's families and struggling businesses, but also for us as a state relative the rest of the economy. As I have explained on several occasions, the Wyoming economy is lagging behind the rest of the country on almost every relevant macroeconomic account: GDP growth, private job creation, personal income growth, consumer spending... We cannot afford to do anything that will put us further behind.

There is yet another reason for us resist big-government solutions to our economic problems.
After having spent a good five years recovering from the Great Recession, the U.S. economy is showing signs of plateauing, and perhaps even heading for a mild recession. Given how weak the recovery was during President Obama's second term, this is not a good sign for our nation's economy in general, but it is even more of a concern for Wyoming. A weakening of the national economy means that we lose whatever pull we can get from the rest of the country to get our economy growing again.

One indicator that suggests we have reached the peak of the current business cycle is the hire-and-fire ratio for the private sector. This ratio shows the number of people hired per 100 people fired, in private businesses. As the black trend line in Figure 1 indicates, there was a long stretch with a slowly rising hire-and-fire ratio from 2011 through 2015. In the past year, the trend has weakened (we will get back to the blue trend line in a moment): 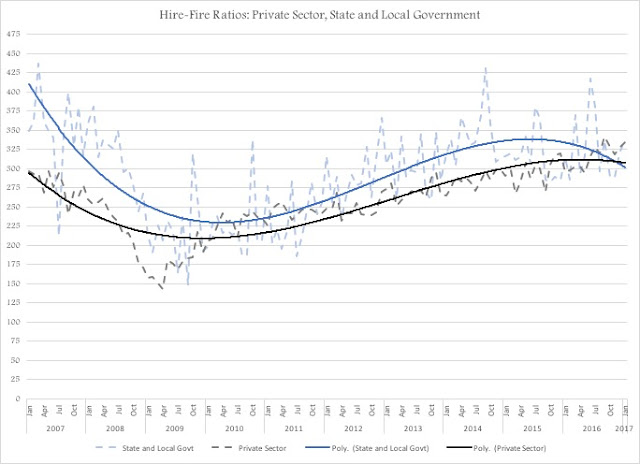 
It is important to keep in mind that the hire-and-fire ratio does not capture those who leave jobs voluntarily, such as those decide to quit because they were offered a nice severance package. Therefore, the ratio is a bit higher than it should be. The trend, though, is basically the same.

The message from the plateauing of the hire-and-fire trend is reinforced by GDP data, especially the highly important private-sector investment number. Figure 2 reports that gross fixed capital formation (GFCF), which is the formal term for private business investments, has been moving toward a plateau for some time now. After having been weakening for two years prior to the Great Recession, GFCF took a nosedive in 2009. The next year it rebounded significantly, only to taper off as the recovery continued: 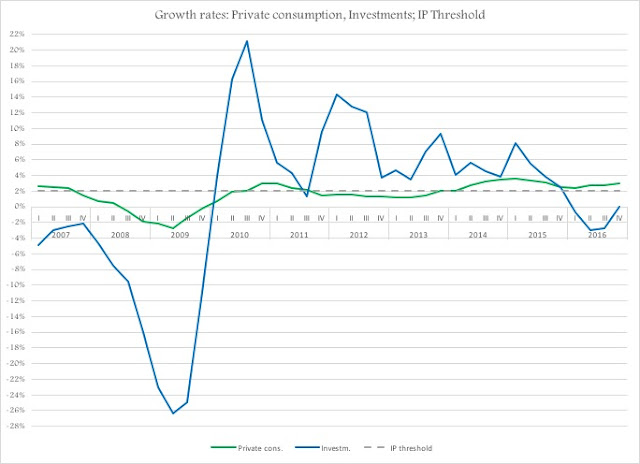 
As indicated by the green function, the largest share of GDP, private consumption (which is about 70 percent of total spending in the U.S. economy), has been hovering somewhere between two and three percent growth since 2014. The average growth in private consumption since 2011 is 2.3 percent per year. In 2015 it actually reached 3.2 percent growth, only to fall back to 2.7 percent in 2016.

It would appear, generally, that 2015 was the peak of the recovery from the Great Recession. It remains to be seen whether or not President Trump's health care reform will be strong enough to inspire more growth; his planned tax cuts would also be of great help. However, until we see the results of those reforms, it is prudent to assume that the national economy is on the brink of a mild recession. As a result, again, there is less out-of-state help to be expected for Wyoming as we struggle to turn our state's economy around.

One positive point: as shown in Figure 1, the hire-and-fire ratio for state and local governments around the country is actually dipping. After having been higher than for the private sector over a long period of time, it now seems to finally be aligning with the tax-paying sector.

This is also true for Wyoming. The latest numbers from the Bureau of Labor Statistics inspire cautious optimism. More on that in a later blog article.
Posted by Sven R Larson, Ph.D., Political Economist at 12:05:00 PM