In a couple of months, our legislators will begin preparations for the 2018 session by beginning to attend committee meetings. As they do, the state's budget crisis will inevitably rise to the top of their to-deal-with list, especially since the past session created a commission to find new options (taxes) for school funding.

As I have explained before, the logical way forward would have been to appoint a commission for school-choice and educational-freedom reforms. That did not happen, which means that the fight to stop tax increases in our state is far from over. Therefore, we must combine efforts for sound spending reform with efforts to win the argument on the tax front as well.

I am not surprised that the first reaction from many of our legislators is to seek out new tax revenue. Having been active in, and worked professionally with, politics and policy issues for the better part of my adult life, I know all too well how the political mind works. It prefers status quo over change every day of the week and twice on a Sunday. Unfortunately, in the political mind status quo means preserving what exists here and now, more than anything else, and "what exists" always refers to government spending.

I am not poking fun at, nor being dismissive of, our legislators. I am merely explaining what my experience tells me. In fact, I can understand our elected officials: the longer they serve, the more their loyalties are split between voters and the government they are elected to oversee. A lawmaker often considers himself a provider of the government services he is elected to be the steward of. Again, I completely understand this mindset - I am sure I would be struggling with the same loyalty issues if I were a legislator.

The problem is that our lawmakers' loyalty ties and status-quo preferences blur their vision when they are faced with a situation like the fiscal crisis we now have. The nature of this crisis is such that status quo is the very enemy of necessary solutions.

Hopefully, a review of our state's fiscal history can help break the attachment to status quo and open for a more creative discussion about our state's fiscal future. Figure 1 reports Wyoming state tax revenue from 2001 through 2016: 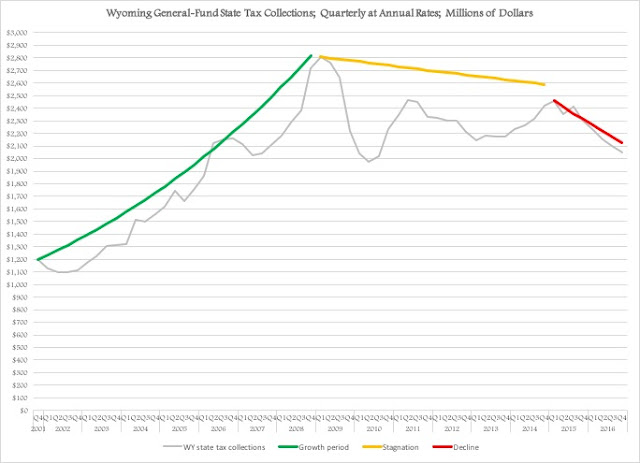 
There are three distinct phases in our recent tax-revenue history. The first is the growth period, or expansion phase, marked by the green line. The second is the stagnation phase (yellow) which began with the Great Recession in 2009. The third phase (red) is the decline in revenue that began in 2015.

The growth period in state tax collections was driven primarily by severance-tax revenue. During this phase, state coffers seemed awash in cash, and it did not help that the federal government expanded Federal Aid to States by, on average, 6.5 percent per year. This was the period during which our state's spending grew lavishly, and did so because it seemed fiscally possible (not the same as "recommendable") at the time. But even more than state spending itself, local governments expanded rapidly. Funding one third of their budgets, with state money, local governments expanded their payrolls by and average of 15 percent.

The stagnation phase was in good part the result of the Great Recession, but it was also a wake-up call for us here in Wyoming. We plummeted from having had one of the strongest state economies to the bottom in terms of GDP growth, private job creation and household finances. The trend of strong growth in tax revenue was replaced with a slowly declining trend.

When Governor Mead took office after the 2010 election, he immediately broke with his predecessor's generous spending policies. For this, I commend him. The problem is that he did not understand the structural nature of the revenue crisis, and therefore did not push for long-term, permanent reductions in state spending. Alas, the government built during the growth period from 2001 through 2008 remained largely intact.

Then came the decline phase, which we are in right now - and we will remain in for the foreseeable future. We went into this phase with a state government, and local governments, that are permanently oversized compared to what taxpayers can afford.

In other words: the growth period during which we built the largest state and local government sector in the country, was an anomaly. We need to permanently reverse that growth.
Plain and simple.
Posted by Sven R Larson, Ph.D., Political Economist at 9:53:00 AM