Suppose you offer a man the choice between a free Big Mac per day, and him having to get a job so he can buy that Big Mac himself.

What will he choose?

Well, if you listen to our state government, the answer to that question is "both". In fact, a majority of our legislators might even suggest that if you give a man a free Big Mac per day, he will work even harder to be able to afford that Big Mac on his own.

I am, of course, just a lowly economist, so I do not possess the insights into the higher intricacies of this world that are bestowed upon our elected officials...
But I am still going to suggest that if you offer a man something for free, he will actually be less inclined to want to work for it than if you offered him nothing but encouragement on his way to work.

The stack of free Big Macs that the legislature is handing out consists, in part, of the $61 million that they appropriated to the Wyoming Business Council (Section 085 of Enrolled Act 82, a.k.a., the state's supplementary budget). As an example of what they do with this money, consider this story from the Casper Star Tribune on March 12:

A nearly $950,000 award from the Wyoming Business Council could beef up operations for a Cody company that makes and sells jerky in the United States and Canada.The state money, which would come in the form of a grant and a loan, would benefit Wyoming Authentic Products, but it is not yet guaranteed. The Wyoming State Loan and Investment Board will make the final decision on whether to approve the grant. And if SLIB rejects the grant, then the company would not receive the loan, since the two are bound together, said Josh Keefe, an economic development finance manager for the Business Council. The governor, secretary of state, state auditor, state treasurer and superintendent of public instruction compose the SLIB. And Thursday’s decision by the council to award the grant portion of the financing package was not unanimous, with some members protesting that the company had been the beneficiary of state funds in the past for economic diversification and it needed to foot the costs of expansion itself.

This is a classic example of corporate welfare, and it has the same addictive effect on recipients as welfare to individuals. The business itself is not to blame here: someone offers them free Big Macs - why should they not accept the offer? No, the problem is that government makes the Big Mac offer in the first place. For some reason, a majority of our lawmakers, and our governor, believe that they and their appointed, tax-paid experts are better than the free market at drawing the line between thriving and diving businesses. But that is only the prelude to the problems with this corporate-welfare program. For one, the mere fact that this jerky manufacturer has received grants in the past, and is now coming back for another helping, suggests that they are the very opposite of a winning business proposition. Assuming that the state funds they got previously were actually aimed at helping them fly on their own, then this particular business failed the test and should be disqualified from more tax-paid funds.

Even worse, though, is the underlying proposition of this new grant, namely that the idea behind the previous grant was not at all to help this business support itself. By giving them even more tax dollars, the Business Council is in fact suggesting that traditional criteria for business success are of no consequence to them. What matters instead is the ability to convince a government board to write them another check.

It gets worse. The Tribune again:

By December 2018, Wyoming Authentic Products hopes to expand by more than twice its current production of 300 cases a week of jerky. The company is seven years old.

How many tax-paid grants and tax-backed loans have they received in that time? How large a part of their revenue originates with, or is guaranteed by, taxpayers?

This is not a rhetorical point. What happens if this company becomes a dominating supplier of jerky, and privately owned, operated and - yes - funded businesses go belly up in this unfair competition? How much tax money will they need to continue to operate, simply because they have grown accustomed to corporate welfare through their career?

Or, to take another angle on the same question: what if some guys in Casper want to start up a beef jerky company to compete with Wyoming Authentic Products? Will they, too, get corporate welfare on the same generous terms? What if a third jerky company pops up in Rock Springs? What makes Wyoming Authentic Products so special that the state of Wyoming thinks they deserve corporate welfare not just to continue to operate - which would be bad enough - but also to expand and conquer new market shares?

The state money will cover most of the 3,500-square-foot expansion for office, smoker, raw meat preparation and packaging space, said Julie Kozlowski, the Business Council’s community development director. The company is now in a building it leases from Forward Cody.The project’s costs are just over $1 million. In addition to the $750,000 grant, which was requested by the city of Cody, the Business Council has arranged for a four-year, 5 percent loan to the company of just under $190,000 that the Business Council, meeting at Casper College on Thursday, also approved. And Wyoming Authentic Products will have to pony up about $97,000 of its own money, said Keefe, the Business Council employee.

As for the $190,000 loan, what happens if Wyoming Authentic Products goes belly-up during the for years over which they are supposed to pay back the loan? Whose money is then lost? (Hint: they pay taxes when they fill up their cars at the gas station, they pay property taxes on their houses - and they vote.)

Back to the Tribune article:

Fourteen people currently work for Wyoming Authentic Products. With the expansion, the plan is to hire 10 more by January 2020. Employees will earn $43,000 a year, which is $10,000 over the county median.

Here we have the most serious long-term problem with corporate welfare. Thanks to government, Wyoming Authentic Products is able to pay its employees significantly more than the average business. This will make it even harder for private businesses to start up in Cody - and elsewhere in the state - and hire good workers. In fact, by living in part off taxpayers' money, this business is making it significantly more difficult for all private businesses in eastern Park County to keep, let alone hire employees.

For a year now, Park County has been losing private-sector jobs: 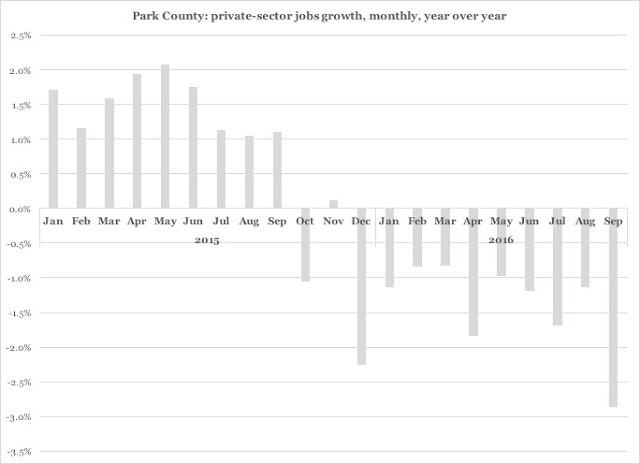 It does not help bring them back if government creates an artificial wage threshold by selecting a "winner" business and propping up their finances with taxpayers' money.

At least one member of the Business Council expressed some concern over its practice. One final quote from the Tribune:

Mike Sullivan of Cheyenne, a member of the council, said the job of the Business Council is to diversify the economy. It would be redundant to give Wyoming Authentic Products more money, since the firm is already in operation, he said.“The governor has asked us to go out and recruit the businesses and give them to the tools to be successful,” he said. “We have done that. This is a perfect example.” Sullivan said he was concerned that other firms will see the money and want more for themselves. “It’s going to become too easy to go for a second and third and fourth grant,” he said.

Mr. Sullivan is correct, of course. However, following his advice won't do the trick. Too many people are too easily seduced by the temptation to dole out other people's money.

There is only one alternative: shut down the corporate-welfare office masquerading as the Wyoming Business Council.
Posted by Sven R Larson, Ph.D., Political Economist at 10:03:00 AM