Back to the "Old Normal"

Now that most of the legislative attempts at raising our taxes have died, it is time to start focusing on the alternatives to tax increases. The tax hikers in the legislature will most certainly hold the fiscal conservatives accountable, saying things like: "Alright, you got what you wanted - no tax hikes. So what's your alternative?"

Fellow fiscal conservatives - this is where the real job begins for us. What we have seen so far is only the preamble to the real battle for our state's future. Now it is time for us to step up to the plate and present our solutions.

Last week I published a to-do list, A New Chapter for Wyoming. In the coming weeks I will roll out more articles with more details and more analysis to back up this plan and make it legislatively appealing. But I am just one voice - an independent economist - and I cannot be the only one doing this.
We, friends of fiscal conservatism, must all speak up. We must all be ready to work, one way or the other, for the right kind of structural, permanent spending reforms.

This is our chance. If we succeed, we can turn Wyoming into the most prosperous state in the country.

On the other hand, if we fail now, that's it. The tax hikers will come back with a vengeance, and when they do, Wyoming will be doomed.

Before we start working on turning A New Chapter for Wyoming into legislative reality, let me first put our current economic situation in a context that, hopefully, will help put an end to any and all conversations about tax hikes. (This includes any conference talks between the House and the Senate to reconcile differences between bills approved in both chambers.)

Wyoming has not always been a prosperous state. In fact, the era when the state can support the largest government in the country is short by historical comparison - and it is drawing to an end.

There is plenty of economic data that can verify the last point. Let me just add one that was recently updated: private consumption spending. In 2015, the last full year for which data has been released, our state once again parked itself at the bottom. With an annual growth of 1.2 percent, only North Dakota fell behind us - and please keep in mind that these are current prices, which means they are boosted by inflation (no price-chained data is available yet): 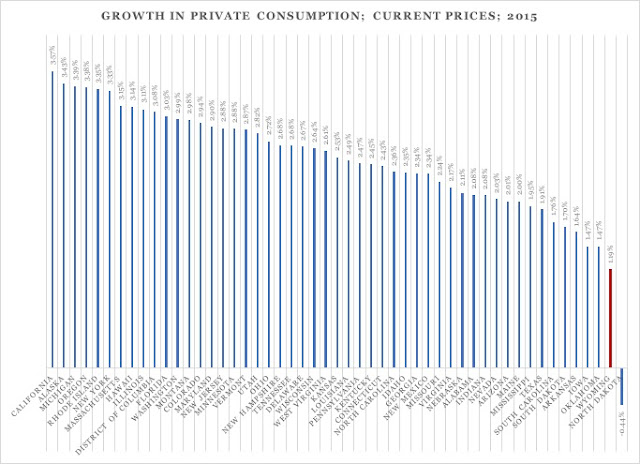 One of the most important economic indicators is the employment numbers for the minerals industry. It looks like their long streak of job losses is coming to an end - but that does not mean that there is an automatic turn-around awaiting us. On the contrary, the minerals industry seems to be stabilizing its operations at a lower long-term level. It is, so to speak, a return to an "old normal".

The rest of the economy is following suit. Today, six out of ten jobs lost in the private sector are lost outside of the minerals industry. Up to a point, this is logical; beyond a certain point - and I believe we have passed it - this loss of non-minerals jobs becomes an independent force in the economy.

The big question, of course, is how far this decline in the private sector will continue. I am not ready to offer a definitive answer, but if our lawmakers can keep themselves from raising taxes it is entirely possible that we will see a flattening-out of the non-minerals jobs decline. Tentatively, I would say that under the no-new-taxes condition we could see a macroeconomic stabilization in 2018.

Please note again: stabilization does not mean improvement. I am sorry to keep repeating this point, but it is a very common mistake among both economists and politicians to believe that an end to an economic decline automatically means that the economy starts improving again. It does not. All it means is that we can now being to predict the future of a less-prosperous economy.

Why is this point so important? Because when the economy stabilizes at a lower level of employment and prosperity, tax revenue will be permanently lower than before.

There is some interesting data that reinforces this point - and shows how the recent years of exceptionally high tax revenue have been just that: exceptional. Figure 2 reports per-capita disposable income in current prices for the United States as a whole (red), and for Michigan (dashed), Texas (grey) and Wyoming (green). The illustration is not for actual annual disposable income, but relative growth rates. Each of the four functions starts at $100, then grows according to actual historic records. This way the comparison concentrates exclusively on how differently the states have evolved: 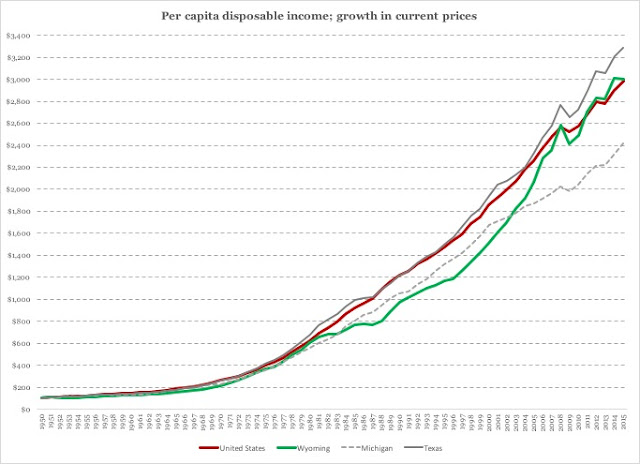 
As we can see, for most of the second half of the 20th century, Wyoming experienced slower growth in per-capita disposable income than the country as a whole. After having had higher disposable income than the rest of the country in the early 1950s, the nation as a whole caught up and, for sustained periods, surpassed us. It was not until the minerals boom began, some 15 years ago, that we caught up and, briefly, surpassed the national average.

Now, though, the rest of the country is catching up with us. The weaker the minerals industry becomes, the more glaring is our lack of a secondary industry.

Figure 3 offers a more detailed view of the same data as Figure 2, though here we remove Michigan and put West Virginia in its place. This state, as we know, is the second-largest coal producer in the country. The data is, again, a relative comparison with each state starting at $100 in 1950, with concentration on the period from 1980 and on: 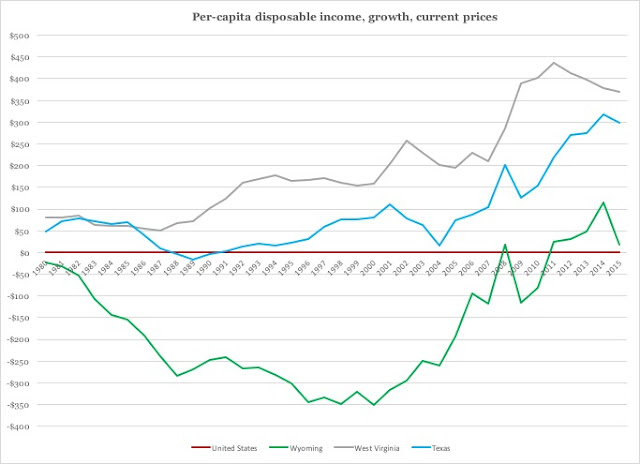 
Again, look at the performance of disposable income in Wyoming. For more than 20 years our per-capita, net tax earnings fell behind the country as a whole; our catch-up period, about ten years long, is a historic anomaly.

For our legislators, the message in these charts is clear: even as the private-sector decline comes to an end toward the second half of 2017, and even as the private sector settles in at a lower level of activity in 2018, you have no reason whatsoever to expect a return to the recent heydays of big tax revenue. Those days were a historic aberration in our state. We can no longer afford the big government you built during those days.

The "old normal" is back. It should be obvious to each and everyone of us what that means for government.
Posted by Sven R Larson, Ph.D., Political Economist at 11:46:00 AM