As the legislature enters the final stretch of the 2017 session, they still have some serious work to do, especially on the tax-policy front. There is still a risk that they will add 0.5 percent to the sales tax through HB236, the School Funding Omnibus bill, and SF131, also known as the HIT Bill (Highway to an Income Tax). HB236 was referred to the Education committee on February 13, while SF131 was placed on General File on February 15.

Yesterday I suggested a modification to HB236 (and its Senate equivalent, SF165) which would contain the costs of our education system over the short term and neutralize the demand for higher taxes. However, even if the legislature would make the necessary changes to HB236/SF165, there is still the threat from SF131 The HIT Bill.
The really worrying part of this bill is Section 1d, which says (emphasis added):

The select committee shall sponsor legislation for introduction in the 2018 budget session as it determines appropriate for modification to revenue streams and potential additional revenue options which would provide sufficient revenue to fund ongoing state operations, including state funding of K-12 education operations and capital construction funding in light of current revenue projections.

Here is what the bold part of the text says, in plain English:

The committee should do everything it can to come up with tax revenue so we don't have to cut spending.
With a budget deficit projected to reach $700 million per year by 2020, this means that the committee would have to find new revenue enough to close that gap. Since there is no chance that increases in severance, property or sales taxes could come close to raising that kind of revenue, the only option left is - yes - an income tax.

This, of course, is an incredibly bad idea. We might as well declare Wyoming a macroeconomic disaster zone. Higher taxes are generally bad for the tax-paying sector, and they would be particularly bad for businesses and families in Wyoming today, when we have the slowest private-sector job creation in the country. But when it comes to tax revenue, which is the only thing our state legislative leadership seems to be worried about, there is an even more alarming number to consider:

For three quarters in a row, the Wyoming economy has been shrinking at a rate of 6.5 percent per year, adjusted for inflation.

A decline at this level is worse than a recession. We are talking depression-level decline in state GDP. Only North Dakota is doing worse; our growth record is three times worse than Alaska and more than twice as bad as West Virginia.

Here is another perspective on the same problem, a perspective that hopefully will put our state lawmakers out of the delusion that there is any room for any tax increases in any corner of our state:


Please consider this last point. We have the second-smallest economy of all 50 states, with only Vermont below us. Yet during the Obama presidency we lost more of our economy, in inflation-adjusted dollars, than any other state in the union except Connecticut.

GDP is the broadest possible measurement of the potential tax base. If we are losing more tax base than 48 other states, what does that tell us about the idea, embedded in SF131, to find new sources of tax revenue?

The only way to recreate the tax base is to allow the private sector to grow. The only way that our state can create new taxpayers is to allow private employers to expand their businesses and thereby create a need for new employees. The relationship between economic growth and jobs creation in the private sector is one of the most basic relationships in our economy; as Figure 1 demonstrates, not only does a growing economy create more private-sector jobs, but a shrinking economy quickly destroys them: 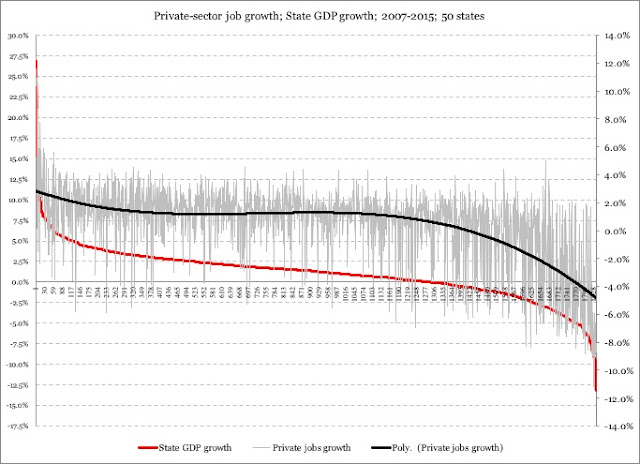 This relationship is very strong in Wyoming as well. Figure 2 reports GDP growth and changes in private-sector employment from 2007 through 2015: 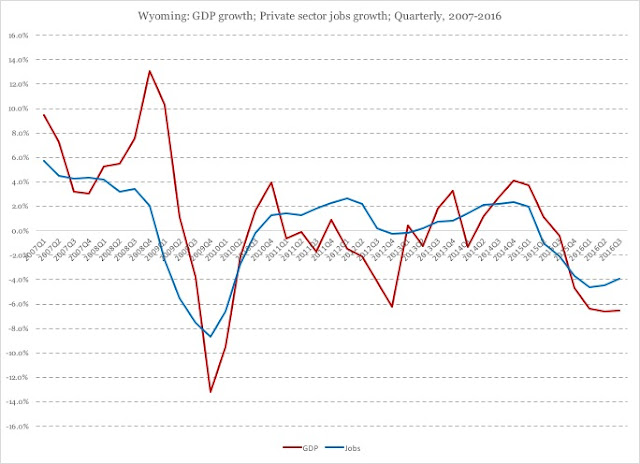 I cannot stress this enough: higher taxes is a bad idea on any day, but right now, with our state having the worst-perfoming economy in category after category, higher taxes would tip our economy over the edge, from depression into a macroeconomic disaster.
Posted by Sven R Larson, Ph.D., Political Economist at 2:38:00 PM