Yesterday I reported that private-sector employment is down, year-to-year, in 18 of 22 counties (no data from Niobrara). Together with the numbers I presented earlier this week, showing that six out of ten jobs lost in the private sector are from outside the minerals industry, the county employment numbers are a stark reminder that our state's economic crisis is no longer the minerals-only crisis it was originally - and is still often being portrayed as.

The total, statewide loss of private-sector wage earnings amounts to $208 million, or $832 million adjusted annually. This is somewhat less than the losses in the first quarter, which were close to $1 billion in annually adjusted wage earnings. However, this should not be taken as a sign that the crisis is over, or beginning to subside. Coupled with the job-loss numbers I reported earlier this week, the decline in per-quarter wage losses is a confirmation that the decline in employment has shifted from the minerals industry to the non-minerals part of the private sector, where wages are notably lower.

A comparison between changes in employment and changes in total private-sector wages is normally a redundant piece of work; when people lose their jobs they lose their income. However, given where our state is today and given the effort still needed to communicate the seriousness of our economic problems here in Wyoming, I put together the following chart. It shows the percent of change in total private-sector wages (blue for increase, red for decrease) by county, from the second quarter of 2015 to the second quarter of 2016. It also shows the change in private-sector employment for the same county during the same period (black line): 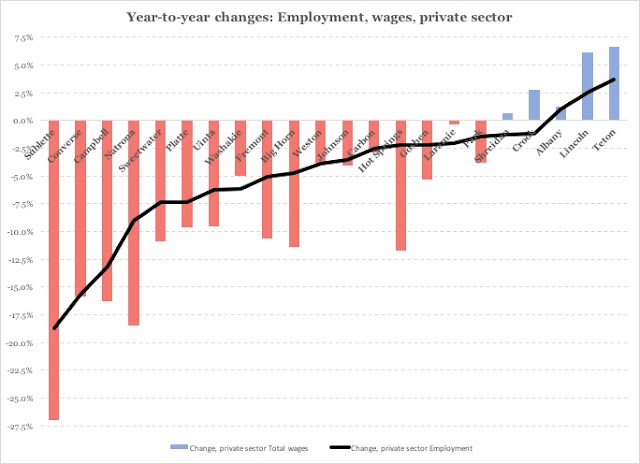 The next figure is a bit more informative. Instead of comparing job losses to total wages lost, it compares job losses to the decline in wages per remaining employee in the private sector. This gives us a hint of where in our great state job losses are predominantly happening outside of the minerals industry; the smaller the decline in wages per remaining employee, the smaller the difference is between their wages and the wages of the people who lost their jobs. The minerals industry started laying off people in early 2015, and has shown signs recently of stabilizing operations at their reduced level; therefore, small changes in per-employee wages are not likely to be the result of changes to minerals employment.

As Figure 2 shows, in eleven counties the change in unemployment was bigger than the change in per-employee wages. This points to an even wage structure in the private sector, and, again, that in turn suggests that the bulk of the jobs lost in those counties are not in the minerals industry: 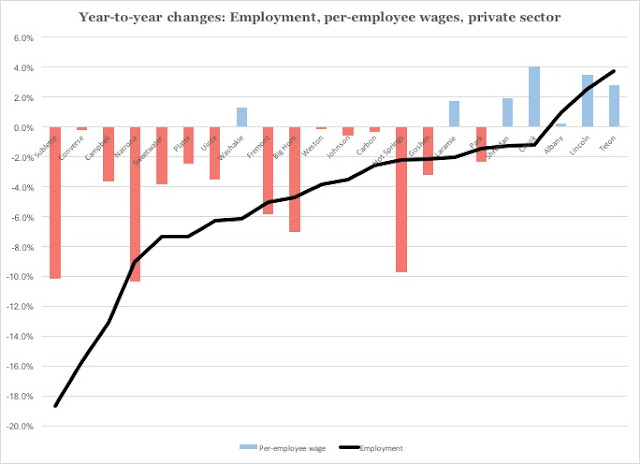 A later blog article will analyze industry-specific jobs data by county. It will take a couple of days to get it done. Stay tuned.
Posted by Sven R Larson, Ph.D., Political Economist at 12:20:00 PM