The Bureau of Labor Statistics has released preliminary employment numbers for December 2016. The good part of this is that we can now tally up another calendar year and compare its jobs trend to previous years.

The bad part is the numbers themselves. From December 2014 to December 2016, Wyoming has lost 17,000 - seventeen thousand - private-sector jobs.

Half of those jobs, 50.9 percent, were lost in the minerals sector. The other half was lost in almost every other industry imaginable. But as I have reported earlier, it is increasingly the non-minerals sector that declines on a year-to-year basis:


Figure 1 compares the year-to-year decline in employment in, respectively, the minerals (grey) and the non-minerals (black) private sector:* 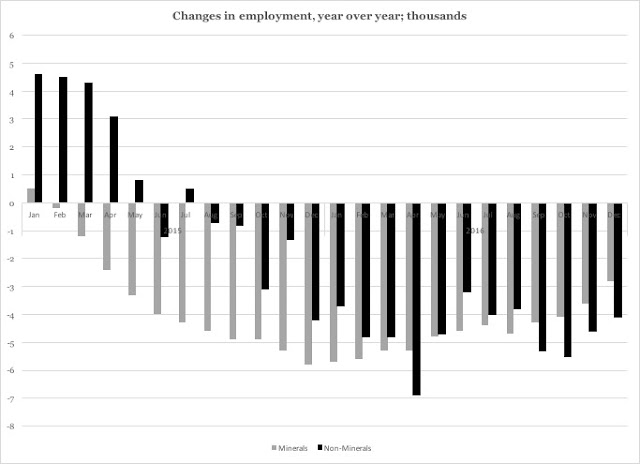 For 20 months now, the private sector here in Wyoming has been operating with fewer employees than the same month a year earlier. Since the non-minerals sector is now responsible for most of that decline, it means that the economic downturn that began in the minerals industry has solidly set roots outside of that industry.

Macroeconomists often refer to this as the "multiplier effect", but there is also an investment accelerator at work behind the scenes. This effect means, in plain English, that if one company reduces investments, it sends both economic and psychological signals to other companies that they might want to be cautious about investing in Wyoming today.

While multiplier effects tend to be fast but relatively short-lived, the investment accelerator is slow to start but lasts longer. Without having run any numbers specifically on business investments, I would suggest that what we are witnessing is not only a multiplier downturn, but also a more long-term effect from the accelerator.

This is important. It is considerably more difficult to turn around an economy burdened by widespread business pessimism - the "trigger" of the accelerator - than when the cause of the downturn is concentrated to household pessimism and the multiplier effect.

I will return in a later article with more data specifically on business activity. For now, let us return to the Bureau of Labor Statistics numbers.

A good way to illustrate the downward trend in employment is to compare monthly numbers year to year in one chart. Figure 2, therefore, reports monthly employment numbers for the private sector, not seasonally adjusted, in 2014 (light blue), 2015 (blue) and 2016 (red): 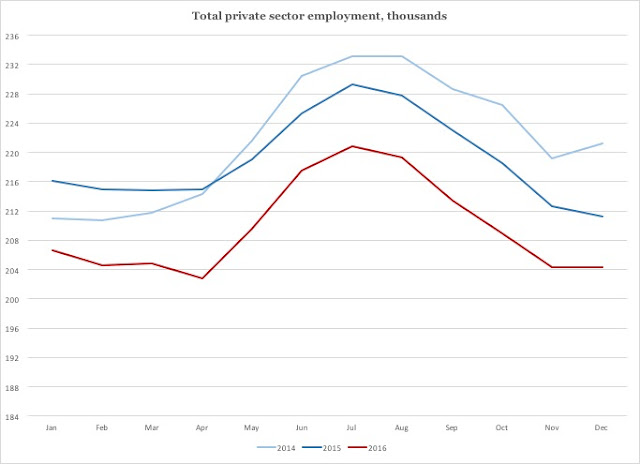 A similar illustration of the employment trend in the minerals industry: 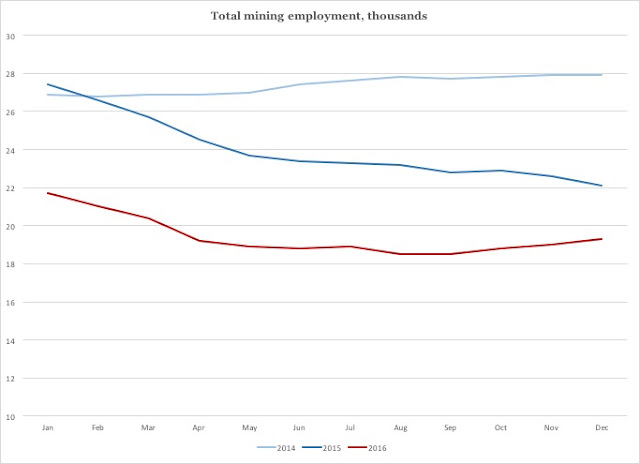 For the first time since early 2015, the last three months in 2016 actually offered a slight uptick in employment in the minerals industry. I realize that this will cause some of our legislators to take a deep breath of relief, thinking "the crisis is over!" However, for two reasons this would be a big mistake. First, the crisis has already set root in non-minerals industries and spread to almost every county across Wyoming. A slight uptick in minerals employment in one part of the state will have no observable positive effects on the job loss that has already happened outside of minerals.

Secondly, the increase in minerals employment is thus far concentrated to mining support functions. Table 1 explains and compares to a minuscule uptick in coal-mining employment:

It is entirely possible that these hirings are "Trump hirings", with minerals companies expressing cautious optimism in the new president's policies being beneficial to their industry. We should certainly hope they are correct - minerals jobs pay well and every industry in the private sector has the right to operate without crippling government interference - but we should also keep in mind that there will be no substantial increase in demand for coal, oil, natural gas or uranium for domestic energy production until the economy as a whole is growing at more than three percent. The ho-hum recovery we experienced after the Great Recession was part of the reason why oil prices fell and coal demand declined; Obama's war on coal was obviously a contributing factor, but it was not more than that.

It is also important to note that the increase in employment in minerals-support functions is located primarily to oil and gas.

As for other industries,


The fact that financial companies make the list of workforce downsizing is another sign of a crisis having spread beyond minerals. This means, plainly, that we as a state are getting noticeably poorer. A closer look at personal-income and private-consumption data will tell us by how much. Expect an article in the next few days.

One last point, one with some optimism in it: there is a slow, weak trend, but nevertheless a trend, of decline in local government employment. More specifically, our school districts have made marginal reductions to their payrolls: since the start of the fall semester of 2016, school employment numbers are consistently lower than for the 2015 fall semester. The difference is minor, but nevertheless there: in December 2016 Wyoming school districts had 25,700 employees, 700 fewer than in December 2015.

Finally, our local governments are slowly beginning to show signs of recognition of the harsh reality that private-sector taxpayers have lived in for almost two years now.
---
*) Raw data for all figures is from the Bureau of Labor Statistics.
Posted by Sven R Larson, Ph.D., Political Economist at 11:31:00 AM

Email ThisBlogThis!Share to TwitterShare to FacebookShare to Pinterest
Labels: Jobs in Wyoming, Macroeconomics