Structure of the Wyoming Economy, Part 2

[Thank you to the two legislators who inquired about this data. One of the inquiries also asked about earnings. Please be patient. It takes time to process relevant data. I will get there...]
---
After yesterday's interstate comparison, here is a closer look at the jobs situation in Wyoming, broken down by county. We can draw three conclusions from the data reported below:

a) We depend heavily on government in almost every county;
b) We are losing private-sector jobs in a way that is totally unsustainable; and
c) The minerals industry is only partly responsible for that job loss.

Let us start with ranking the counties by Government Employment Ratio (GER), in other words the sum total of state and local government employees divided by the number of private-sector employees. That ratio is then multiplied by 1,000 to make it easier to manage the numbers. As a piece of background information, only one state in the union has a GER above 300, namely Wyoming. With this in mind, it is not all that surprising that 15 counties have a GER of 300 or higher: 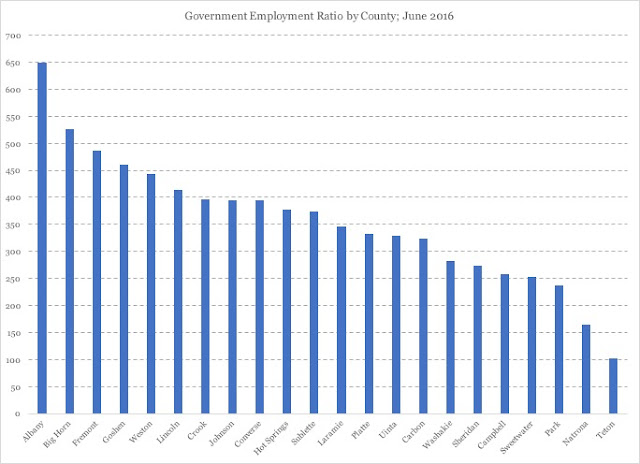 Source: Bureau of Labor Statistics. Data reported is from June 2016.


Albany County stands out because of the University of Wyoming. That said, it is worth noting that cities with universities usually have a high degree of private employment as well, as the universities attract high-skill jobs from contractors, as well as spin off businesses that decide to stay in the area. While I do not have any specific data comparing Laramie (the town) to other college towns, as a general observation the GER strikes me as high.

This raises an important question: if our university town is more heavily dependent on government employees than other, equivalent towns and cities with a big state university, what are the reasons why our university is not as good at generating private-sector jobs in its immediate vicinity? (I will put this question on my to-do list.)

Normally, a large government is negative for jobs creation, and that is generally the case if we compare Wyoming to other states. However, the differences between our counties are not large enough to determine whether or not there is a correlation: the loss of private-sector jobs is so widespread that almost no county can escape it. Table 1 reports the average change in private-sector employment for the first six months of 2016, compared to the same period in 2015:


Whenever private-sector job losses are brought up, the inevitable question is to what extent job losses in the minerals sector are responsible. Generally, we know from statewide data that the decline in private-sector employment is increasingly driven by the non-minerals part of the private sector; about six in ten jobs lost year-to-year are non-minerals jobs. Therefore, it is interesting to see if there is any correlation between the share of the private workforce working minerals jobs, and the percent change in total private-sector employment.

Figure 2 has the answer. The blue-and-red columns report changes in private-sector employment by county; the black function reports the share of private-sector employees who work in the minerals industry. The counties are ranked based on private employment changes; as we can see, there is a weak correlation in the sense that counties with a higher share of minerals jobs have lost somewhat more jobs than other counties. However, the correlation is far from as strong as one would think, given the general crisis narrative in Wyoming media: 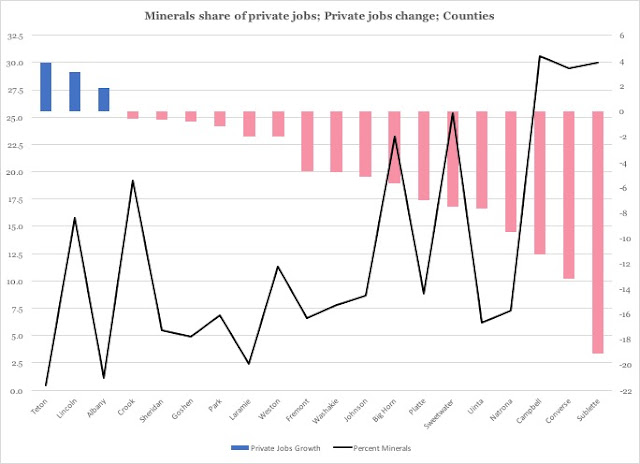 
Note, for example, that Lincoln and Crook have relatively high shares of minerals jobs, 15.8 and 19.2 percent, respectively (of total private-sector jobs). Lincoln gained 3.1 percent private jobs from the first six months of 2015 to the same period in 2016, while Crook lost a microscopic 0.6 percent. By contrast, Johnson county, with 8.7 percent minerals jobs, and Platte with 8.8, lost 5.2 and 7 percent, respectively, of their private jobs.

Only the three counties with a minerals-job share around 30 percent - Campbell, Converse and Sublette - strongly confirm the hypothesis that the minerals industry drives the job loss. They were down 11.3, 13.2 and 19.1 percent total private-sector jobs.

In summary, we have a relatively clear picture of our state's labor market:

a) We depend heavily on government in almost every county;
b) We are losing private-sector jobs in a way that is totally unsustainable; and
c) The minerals industry is only partly responsible for that job loss.
Posted by Sven R Larson, Ph.D., Political Economist at 3:59:00 PM