Last week the Joint Education Committee presented a white paper from is school-funding subcommittee. It was a soft-spoken yet unmistakable case for higher taxes.

In fairness, the paper also discusses spending cuts. The problem is that the spending cuts they propose are of such a kind that they will make the same government that we have today, fit within a smaller tax base. None of the proposals would lead to a re-modeling of the school system itself.

And that, unfortunately, is exactly what we need.
Our current government, including but not limited to public education, is structurally unaffordable. While it is good that there is at least a conversation about spending cuts in our legislative committees, the cuts they propose are not of a kind that will solve the structural budget problem behind the current deficit.

The problem with a structural budget deficit is not commonly discussed. It is a somewhat complex phenomenon, but it is also an economic reality in Wyoming today, making it all the more important that we grasp it. Once we do, it will be a whole lot easier to:

a) understand why some budget "solutions" are seriously inadequate, even harmful; and
b) design the right kind of lasting budget solutions.

Today's blog article will give a theoretical background to the idea of a structural budget deficit. Tomorrow's article will identify the structural deficit in our state budget and explain what difference structural spending reforms can make.

A structural budget problem occurs when the legislature designs spending programs based on other criteria than what the tax base can pay for over an extended period of time. Those criteria are, fundamentally, ideological in nature: our legislators pass laws that grow entitlement spending because they believe it is the duty of government to provide people with certain entitlements.

Yes, the motive behind entitlement spending is always, fundamentally, ideological. Even a state legislator who says that he is a conservative, is fundamentally a redistributionist if he:

a) votes for the creation or continuation of entitlement programs, and
b) does not suggest or support reforms to provide private alternatives to those entitlements.

Many conservatives will deny this, claiming that it is the compassionate thing to do to have government provide at least a limited supply of entitlements. I am not going to dispute their definition of "compassionate conservatism", but I am going to point to the fiscal reality behind any kind of entitlement-driven government spending. After all, you can support whatever ideology you want; if it does not match our fiscal and macroeconomic reality, that ideology will eventually cause more problems than it solves.

The fiscal reality of the welfare state is pretty simple and straightforward. On the spending side of the government budget, we dole out cash to people, or pay for services, all of which they get without having to provide anything in return. Everyone who meets a list of criteria will be entitled to the cash or the service.

In theory, this may sound like a good idea. In reality, it means that the cap on entitlement spending is decided by how many people meet the entitlement criteria, and what it costs to provide whatever they are entitled to. The number of entitled people is open: there are no entitlement programs that have a numerical cap on the number of people who are defined as entitled.*

As for the cash or service part of the entitlement, the cost is defined by whatever improvement in people's lives that the legislature wants to affect. If, for example, we want all kids to go to a school that meets certain minimum criteria in terms of teacher education, service functions, building standards and educational goals, then the cost of the school system is determined solely by the cost, over time, of meeting those criteria.

At no point, so far, have we discussed how these entitlement programs are going to be paid for. Before we do, there are two more points to be made about entitlement spending.

First, there is the problem of operational cost increases. When our legislators give out entitlements, the functions that provide those entitlements have cost drivers built into them. People who work with providing the entitlements (teachers; nurses and doctors; social workers) need salary raises over time. The cost of materials used in health care, education and other services goes up with inflation (sometimes more than that, as in the case of Medicaid-funded health care).

Some entitlements are COLA-driven, in other words entitlement spending follows a formula to neutralize increases in the cost of living.

Secondly, there is a dynamic cost-increase variable that is often overlooked when legislators create, or renew, entitlement programs. Human nature draws people to goods and services that, seemingly or actually, are given to them for free. The more generous entitlement programs are, the more people will try to qualify for them.

There is a reason why the poverty population in California increased disproportionately to the rest of the country after welfare reform some 20 years ago. The Golden State chose to place its post-reform welfare programs at the most generous level permitted under federal law. However, you do not have to be California to be generous: in a 2013 research report, Cato Institute Senior Fellow Michael Tanner and research associate Charles Hughes showed that in 35 states welfare pays better than a minimum-wage job. In Wyoming, welfare paid the equivalent of an hourly wage of $15.68.

Yes, it would be logical. Unfortunately, logic and reality do not always match. Tax revenue is determined by two factors: the tax rates and the taxable value of private-sector economic activity. The growth of the private sector's taxable value, or the tax base, is driven by the free market.

Early on, when the welfare state is moderate, this discrepancy between the growth rates in taxable economic activity and entitlement spending, does not create much of a problem. The private sector is operating largely unfettered by government. The small entitlement programs that exist at this point do not impose much of a burden on taxpayers.

Over time, though, entitlements grow. This is in good part to the variables discussed above, but the growth is also driven by the creativity of legislators who, over time, discover that they can use taxpayers' money to make - as they see it - a difference in people's lives. New entitlement programs are added to old ones; old entitlement programs expand to provide its cash or in-kind services to more people.

There comes a point when the burden of government spending weighs so heavily on taxpayers' shoulders that private-sector activity begins to respond negatively. Fewer jobs are created; wages and salaries do not rise as they used to; investors and entrepreneurs grow more cautious about risking their money. As the slowdown in private-sector growth becomes permanent (which it does), investors, entrepreneurs and jobs start moving to other jurisdictions.

Eventually, the growth in tax revenue weakens to a point where it can no longer provide for a growing welfare state.

Up to this point, it has been a relatively simple matter for socially compassionate conservatives, liberals and other friends of tax-paid entitlements to raise enough taxes to pay for their welfare state. From hereon, though, the story changes. Stagnant private-sector growth not only leads to a stagnant tax base, but also increases demand for the welfare state's entitlement programs. More people are unable to find jobs; more jobs pay so little that more people qualify for welfare-state cash or services (think Earned Income Tax Credit or Medicaid).

We have now created yet another growth factor behind entitlement spending. Once the welfare state grows past a certain point, the "new normal" is that spending always outgrows its tax base.

As an example of what this means for Wyoming, consider these numbers from the state GDP data published by the Bureau of Economic Analysis. These are inflation-adjusted averages of annual growth rates, measured quarterly:

On the face of it, these numbers give the impression that the Wyoming tax base was healthy enough to pay for government in the 2006-2010 period, and that the structural weakness we are now dealing with, is only five-or-so years old. However, a closer look at our GDP data shows that we have been in a structurally weak spot for many more years than since 2010. It was disguised by strong inflation in minerals prices, which misled our legislators into believing that they had a cornucopia of tax revenue to drink from.

Once minerals prices deflated, a grim reality, hidden behind smoke screens of oil, coal and natural gas prices, was suddenly painfully visible from our (not yet renovated) state capitol. At that point, though, the prevailing opinion (not shared by all legislators) was that it was more important to save state spending than to bring the size of government in line with what the tax base could sustainably provide for.

Let us summarize the structural budget problem in one figure. On the vertical axis we measure government spending; the horizontal axis measures tax revenue. Both variables are dedicated to entitlement spending (which happens to dominate the Wyoming state budget).

The function in Figure 1 called "entitlement spending" shows how spending grows over time relative tax revenue: driven by the cost-increasing factors we discussed above, it grows exponentially compared to tax revenue. By contrast, the factors behind the growth in tax revenue weaken over time. For every new tax dollar raised, the tax base can pay for less and less new government spending. The reason is simple: it costs so much in the form of increasing the tax burden that eventually, the private sector simply stops growing. Beyond that point, every new tax dollar raised costs more in terms of increased welfare-state spending than it yields in new tax revenue.

In other words: entitlement spending is of such a nature that, over time, it steadily outgrows tax revenue; by contrast, tax revenue growth tapers off until the welfare state's costs for that last tax dollar exceeds the new revenue. 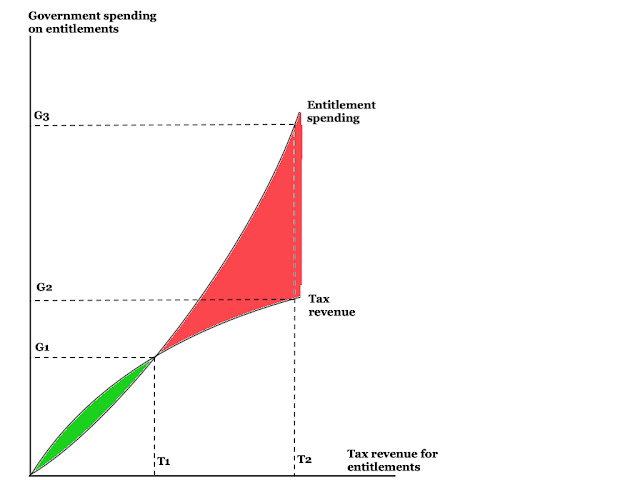 Again, in theory the welfare state remains fiscally sustainable for the foreseeable future if it remains at or below G1 and T1. In practice, that does not happen. Entitlement spending keeps growing, partly because entitlements always create their own clients (again, think California after welfare reform) and partly because there are many do-gooders among our legislators.

The growth in the welfare state gradually brings the state budget into the red zone, where at every point government needs more tax revenue than the tax base is able to provide. Or, if we look at it from the other side of the equation: when government is big enough to spend G3 dollars every year, the tax base can only provide T2 tax dollars. If government was capped at G2 dollars of spending, there would be no budget problem. But since government is at G3, we have a permanent, structural spending problem.