Facts about the Wyoming Economy

In order to understand what is really going on in the Wyoming economy, we need to have accurate economic information about our state. This includes, of course, the trends and the scenarios that I often write about on this blog, but it is also important to have appropriate institutional facts about our economy.

It also reveals two troubling facts that help explain why our state government is in such deep fiscal trouble.

Before we get there, though, let us look at one of the major economic variables and what it can tell us about our state: personal income. If we want to get "close" to people's real-life personal finances and still maintain good analytical standards, personal income is the variable to study.

Every year we Wyomingites make about $32 billion in personal income. This includes work-based income, dividends and interest, and transfer payments from, for example, Social Security and private pension plans. If we drill down to work-based income, we find that:

Here is a list of the five largest industries in our state, ranked by total, annual work-based personal income (in billions of dollars) as of 2016:

Immediately, we notice that mining, while an important industry, is not half as important to Wyoming income earners as government.

Has it always been like this? Well, let's take a look. Figure 1 reports the share of total personal income earned in the minerals industry (black), state and local government (grey) and the non-minerals private sector (blue): 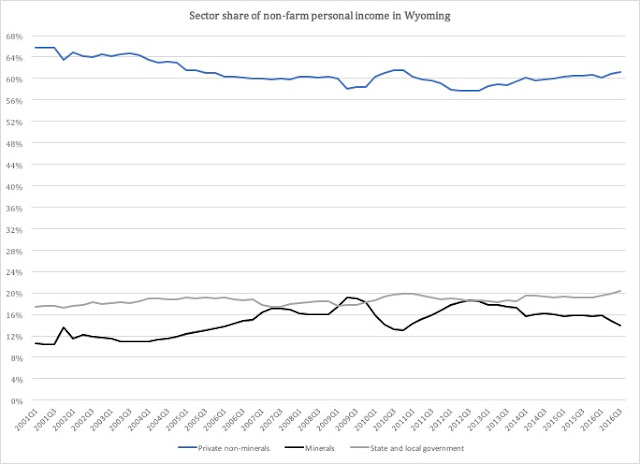 Source for this and all other figures and tables: Bureau of Economic Analysis

With a few exceptions, employees of the state of Wyoming, and of our local governments, have earned more than employees in the minerals industry. Only at one point, in early 2009, did minerals workers earn more, together, than state and local government employees.

The problem with the non-minerals jobs is that they pay relatively poorly at, on average, $36,000 per year.  Since such a large part of our workforce is employed in this relatively low paying sector of the economy, taxes that seem to be a minor problem to some, weigh heavily on the shoulders of many others.

Not only do far too many workers in our state make modest paychecks, but overall there is a steady decline in personal income. Figure 2 reports annual changes, by quarter, in total personal income (black) including transfer payments, interest, dividends and other non-work based income; and strictly wages and salaries (grey): 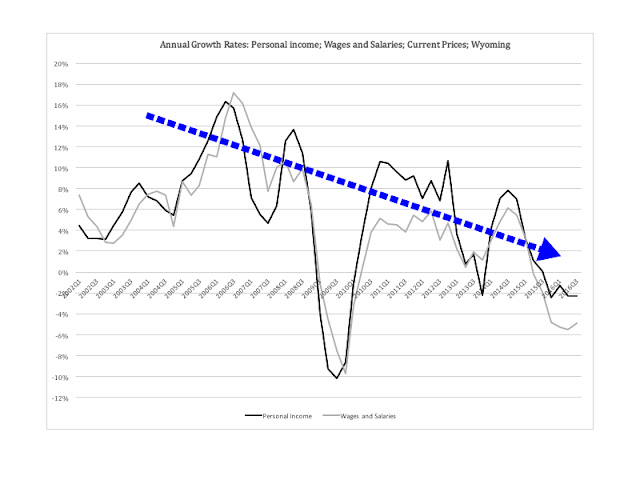 Again, prevailing wisdom would suggest that this is due to the decline in the minerals industry. That is part of the story - but only a part of it. While keeping Figure 1 in mind, let us take a look at a more detailed version of Figure 2: 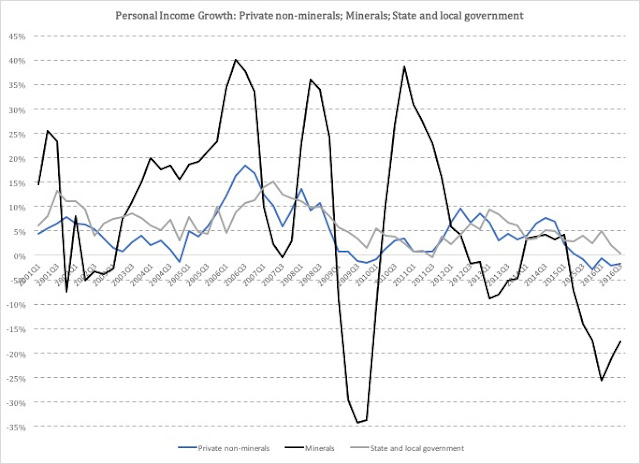 The total personal income earned by minerals workers has fluctuated wildly over the past 17 years, but since about 2010 there has rarely been any positive news to report. Earnings by minerals workers fell by approximately 21 percent in 2016 over 2015, and that was only the latest year of decline.

Meanwhile, things are not looking very good in the non-minerals sector either (blue function in Figure 3). The only sector with some steadiness in growth is government (grey). More specifically, the average annual growth rates in total personal income:

These are, again, some facts about personal income in Wyoming, where it is made and how different sectors relate to each other over time. Hope this helps!
Posted by Sven R Larson, Ph.D., Political Economist at 11:49:00 AM