In November I reported that Wyoming had suffered job losses for 17 months in a row. The latest numbers from the Bureau of Labor Statistics cover two more months, taking us through November of last year, and the trend continues:

In the minerals industry, year-over-year job losses were 4,100 in October and 3,700 in November.

The trend continues with the non-minerals private sector being responsible for the bulk of our state's job losses. This is troubling, to say the least, because it makes it all the more difficult for our state legislators to turn this downward spiral around - unless they are willing to do the right kind of structural spending reforms (for examples, click here, here and here) and go on the offense when it comes to turning the state's economy around.

To further demonstrate the urgency of our crisis, let us compare ourselves to the one other state that has a long, well established dependency on natural resources, namely Alaska. Their economy has been in a free-fall for at least a year longer than ours, and there is no end in sight. On December 2nd the Alaska Dispatch News reported:

Job losses in Alaska accelerated in the year's first six months as low oil prices kept slamming the economy, with the downturn spreading from the oil and gas and construction sectors to hurt restaurants, bars and stores, according to a detailed view of the jobs picture released by state economists on [December 2]. "I about cried when I first saw the data — it was shocking," said Caroline Schultz, an economist with the Alaska Department of Labor and Workforce Development ... She described Alaska's current economic state as a "recession." Employment fell 1.6 percent or 5,530 actual jobs during the period, compared to the same stretch in 2015. The job losses affected most sectors of the economy and rose from a 1.2 percent drop in January to a 2.5 percent decline in June. 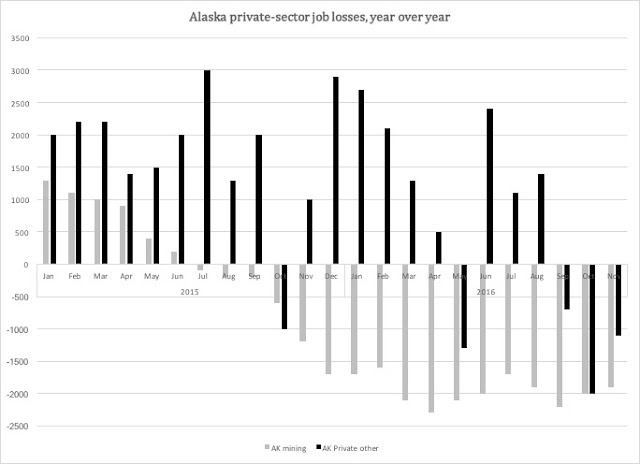 As we can see, the job losses in the minerals industry started in July 2015 and have now been going on for 15 straight months. The non-minerals private sector has a clearly better record, but has not been able to compensate for the decline in the minerals industry (which essentially means oil in Alaska). As of November 2016, Alaska had lost private-sector jobs in eight of the last 12 months; there were 3,000 fewer privately employed Alaskans in November last year than a year before.

All in all, a bad situation.

So how does the Frontier State compare to Wyoming? Well, let us take a look at a Wyoming version of Figure 1. The situation is quite different: 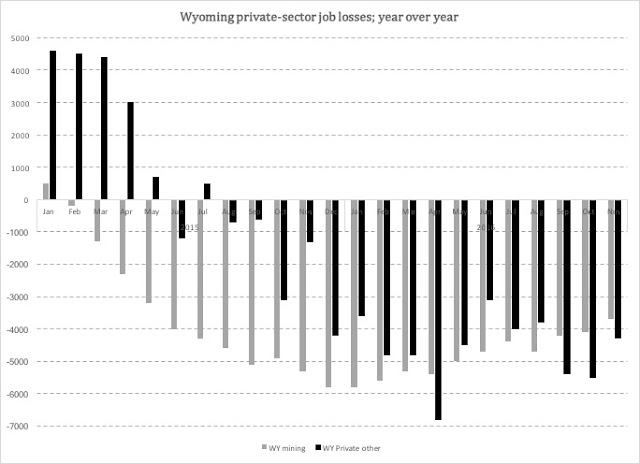 The monthly difference over the previous year differ over time, especially in non-seasonally adjusted data, as we are reviewing here. However, the trend that emerges from this review is unmistakable - and absolutely screams economic crisis.

Or, to compare the two states directly, here are the job losses, year to year, in percent for the entire private sector: 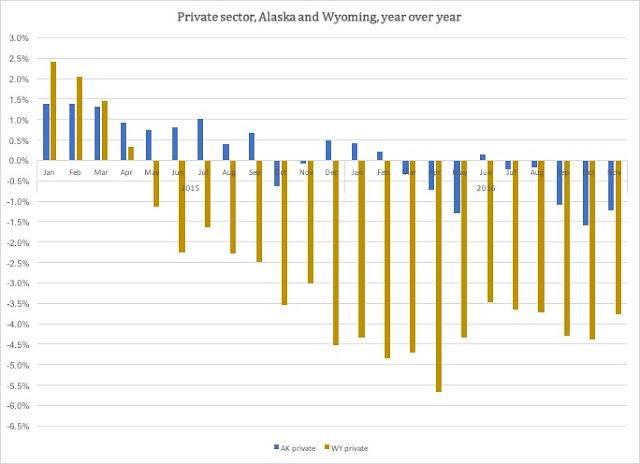 The job losses in Alaska are dwarfed by the losses in Wyoming.

These numbers tell us two things:

1. Our state's private sector continues to shrink, with no end in sight; and
2. We used to be behind Alaska on the downslope - it looks like we have caught up, and perhaps we are even passing them.

I cannot over-state the urgency with which our state legislature must respond to our full-blown macroeconomic crisis. This is no longer a matter of band-aiding it through a revenue crisis; this is about salvaging the Wyoming economy.

Let me, in summary, repeat my recipe for getting this state back on course again:

1. Structural spending reforms (for examples, click here, here and here);
2. An immediate shot-in-the-arm fiscal measure, such as and a one-year sales tax holiday;
3. A complete review and repeal strategy for all regulations that affect Wyoming businesses, both federal, state and local;
4. An absolute, unwavering commitment to no new taxes; and
5. A long-term plan for turning Wyoming into an economic freedom zone.

With these points turned into legislation and actual policy, our state has an economic future again.
Posted by Sven R Larson, Ph.D., Political Economist at 12:08:00 PM